Ear To The Edge Of Time 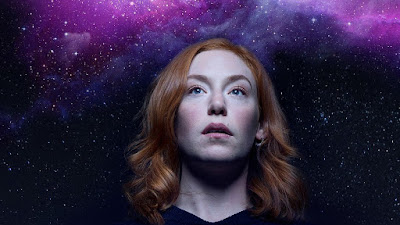 Sport For Jove and Seymour Centre present, EAR TO THE EDGE OF TIME, by Alana Valentine, in the Reginald Theatre, at the Seymour Centre, Chippendale. 13 - 27th October.

EAR TO THE EDGE OF TIME, by Alana Valentine, won in 2012, The 5th International Stage Award - a competition for the best play in the world about Science or Technology. This is its premiere in Sydney (perhaps, the world?).

Professor Geraldine Kell-Cantrell (Belinda Giblin), an internationally famous scientist has commissioned an anthology of poetry that has science as its subject of pre-occupation. Daniel Singer (Tim Walter), a poet, has been given a PhD-student, Martina Addeley (Gabrielle Scawthorn), working at an outback radio telescope site under the supervision of Steven Sarvas (Christopher Stollery), to have, as a subject matter. An aggressive and impatient poet and an aggressively defensive scientist do not begin well at their initial meeting - each suspicious of the other's life time investment. Further meetings tentatively soothe the relationship and when Martina has made a scientific discovery Daniel is in on it and accidentally passes the information onto Steven, who follows through with developing data proof that substantiates the find without informing Martina. Martina feels betrayed and must accept the shared success of the discovery with Steven and 'The Team.' Besides which, later, she hates the poem that Daniel has written and feels it represents untruths - she does not wish for it to be published.

There is robust conversation in this play without interval. There are great linguistic complications concerning astrophysics (pulsars; double pulsars etc) which have not have been 'dumbed down', which in the minds and mouths of these actors make it perfectly comprehensible for us in the moment of hearing it in the theatre (Don't ask me, now, to explain it!). There is, also,interrogation of the differing precisions of the poet and the scientist. There is intrigue about institutional political strategies of some sophistication revealed. It is, then, a feisty play and nothing is absolutely black or white and no-one is either sinner or saint - but, all, are passionate and driven, and definitely right from their own perspective!

The poet is our interlocutor, he begins the play and directly engages us throughout. Mr Walter, is sometimes a trifle over enunciated and terse and makes some 'purple' acting choices to deal with some of his more 'purple' dialogue as a self-righteous poet, who feels, as the 'plot' unwinds, he has a missionary responsibility for the finding of truth and then righting it, and, instead, becomes an unctuous zealot coping, uncomfortably, with constipated poetic ambitions. Mr Stollery's Head Scientist is a charming avuncular that has us trusting him implicitly and so creates a figure of bewildering objective ambiguity - sweet, honest man or villain? His other two little cameos as the uber driver and the book seller, are object lessons of economy and style - most amusing.

Ms Scawthorn carries the scientific conversation and the beating pulse of a motivated female student scientist in an awful but, apparently, normal quandary, with a striking balance of intelligence and emotion, both employed to harness the passions for everything she has to chart as Martina. Her best work, and where the sparks of real drama really combust - fly - are in her engagements with Ms Giblin, as an older female scientist of similar acumen and flair for her chosen field. The cool wisdom and fiery drive of her Professor  Geraldine Kell-Cantrell is balanced thrillingly with the metamorphosing young scientist. It is in the restraint of what we can all read in the bodies of these two actors that gives the performance real grip, clarity and crisp freshness. (Aren't these two actors great? I love their cool intelligent passions.)

The Director, Nadia Tass, has taken this wonderful writing by Alana Valentine, and given it the respect to hurl it at speed at us. There is no pandering. She has no doubt that the words on the page, embodied, ingested and spoken by terrific actors, will be enough. There is much verbal detail at speed. Go alert.

Shaun Gurton has designed part of the 'dish' of the telescope, high above the stage, and has projected upon it actual visions of the universe and images of scientific data that reflect a tranquil but mysterious beauty. There is no other clutter on the stage to distract us from the language, ideas, politics and humanity at the core of Ms Valentine's very stimulating play. The Lighting Design, by David Parker, serves the simple changes of locations. Dan Nixon has created a Music and Sound Design of similar aural impact - serving to support, illuminate.

The text, with all of Ms Tass' decisions, is primary. Hoorah!

AN EAR TO THE EDGE OF TIME, is a very arresting work that is full of much reward. I recommend.

N.B. The panel that chose this play by Ms Valentine as a WINNER were: Tony Kushner, David Lindsay-Abaire and Donald Marguiles (no slouches in the field of playwrights), and Nobel Laureates Robert C. Richardson, Frank Wilczek and David J. Wineland. (All men!)
Posted by Editor at 2:54 PM