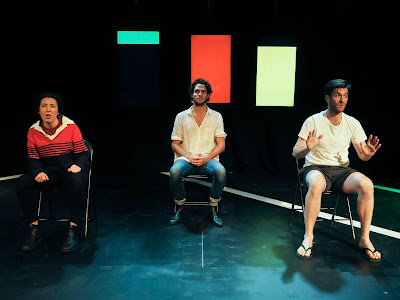 It is a one act (60 minutes) play that has a fatal traffic accident at its centre with six random lives orbiting about it in relative ignorance of their interconnection, or, of the risks that they take, and the impact that they have had on each other. Its conceit reminds one of the Alejandro Gonzalez Inarritu/ Guillermo Arriaga trilogy of films: AMORES PERROS (2000), 21 GRAMS (2003) and BABEL (2006), that reel through a similar random interconnection of lives.

Michael Andrew Collins, has written this play and Directs it. The combination of Mr Collins' possession of the writing and directing delivers with his actors a totally immersive experience that is clever in its organisation of content and arresting in the simplicity of the acting style that the actors confidently exude. Beginning with the fresh 'attack' of a direct monologue form, delivered lucidly by Violette Ayad, and then with the ease of the work from Emma O'Sullivan, Mary Soudi, Nic English and Alex Stylianou, in duologue or combination monologue, one was captured, enraptured from the start to its conclusion.

It is set (Patrick James Howe) in a simple black space with chairs and a backdrop of a set of three movable light boxes to give atmosphere to the shifting locations. There is no attempt at acted realism just a simple paring back to the actors at work using the text to transport us to creating the 'naturalistic' detail inherent to the story, that can often, when physically introduced, clog the communication of the play - it is an owned 'contract' of style, discovered by the collaborators, that the actors simply offer and we take-on willingly and without confusion.

Earlier in the year, we saw Mr Collins play, IMPENDING EVERYONE, commissioned for performance by the Australian Theatre for Young People (ATYP). This new work is a considerable development in style and confidence. It is a fairly remarkable growth.

I, thoroughly recommend the production, the acting and especially the writing. Get yourself along to the Old 505, for BLAME TRAFFIC.