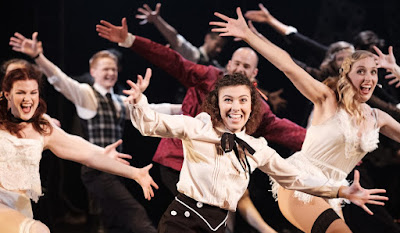 THE WILD PARTY, is an American Musical, with Music and Lyrics by Michael Lachiusa. Book by Michael J. Lachiusa and George C. Wolf. It was performed on Broadway in 2000, and was nominated for 7 Tony Awards.

The year before Mr Lachiusa's musical MARIE CHRISTINE, had premiered on Broadway, with Audra McDonald, but closed after a short season. It was based around the MEDEA story and is famous for the degree of difficulty of its score. THE WILD PARTY, is inspired by the 1928 Book-long poem of the same name by, Joseph Moncure March. It deals with the hedonism of the Roaring Twenties, that was also captured in the writings and lives of F. Scott Fitzgerald, and his wife Zelda (THE GREAT GATSBY, comes to mind). The poem was widely banned as lewd: Some love is fine:some love is rust;
But the fiercest, cleanest love is lust.
Lust of all kinds, drugs and an uninhibited wild, wild time that does, ultimately, have consequences covers the two hour show,

This musical appears, to me, an extremely ambitious piece of work. Using the poem, we meet Queenie (Georgina Walker) and Burrs (Matthew Hyde), a couple in a co-dependent and violent relationship, who decide to give one of their famous parties. "With a guest list worthy of Sodom and Gomorrah, the party brims with vaudeville's bawdiest. From a brassy stripper, Madeline (Prudence Holloway) to a devilish playboy, Jackie (Jack Dawson), a sinful brother act, Oscar (Samuel Skuthorp) and Phil (Michael Boulus), to a fading Broadway diva, Dolores (Victoria Zerbst), an ex-boxing champ, Eddie (Olivier Rahme), to an ex-chorus girl, Mae ( Emily Hart), a hopeful ingenue, Nadine (Tayla Jarrett), to a pair of hopeless producers, Gold (Zach Selmes) and Goldberg (Simon Ward), and a flock of vivacious chorines (Victoria Ruxton, Matilda Moran, Rosalie Neumair, Sophie Perkins and Jordan Warren), to a morphine addict, Sally (Madeline Wighton), and latecomers, Kate (Katelin Koprivec), and her latest accessory, Black (Andre Drysdale), the line-up of characters are as wicked as they come. During the wild night gin, skin and fun, the guests find themselves in a tangle of lust, limbs, and secrets."

The book sketches some 20 characters, each with a song(s) and backstory of their own - it is a very egalitarian sharing of the evening's entertainment. Queenie, Burrs, Kate and Mr Black become the central engine of the 'crisis' of the story but every character carries impact. This requires extreme attention to individual development and one of the things I particularly enjoyed was the work that the actors and the Director, Alexander Andrews, had given. All of the characters have song(s) (bar the chorines) and all of them have a continuous story arc to sustain. On this small stage, Mr Andrews and his choreographer, Madison Lee, create a sensitive detail.

This is supported by an atmospheric Design, both Set and, especially, Costume, also, by Alexander Andrews. Terrific Lighting, by Blake Condon. The score is mostly a play-through challenge and is well done by Conrad Hamill with an orchestra of eight, although there is considerable difficulty with the sound balance between the voices and the orchestra 'noise'. It never seemed to find a good solution - and in a show where the lyrics are of a major importance in establishing and maintaining the individual personas of all, it was a severe obstacle to complete relaxation to fully enjoy the night - one had to fight hard to sort it all out.

Mr Andrews has the capacity to encourage his young artists to commit full-bore to their tasks, and Ms Lee's choreography is startlingly well disciplined and integrated into both the dance aesthetics and character, plot, clarity, though in this sized space is a physical force to be weathered by the audience. It's energy can be overwhelming.

Mr Lachiusa has written a score and constructed a book that is almost fiendish in its difficulties, and certainly challenges this young company vocally, especially, in the second half of the show, and not all of them pull it off. Ms Walker in the leading role of Queenie has the physicality, and type down pat, but seems to be underpowered in the decisions she has made vocally, often inaudible with an under enunciated word usage that become maddening in its soft obscurity. The best of the young performers, as an example of what should be a bench mark is Victoria Zerbst, as Dolores, in a role that is, maybe 20 years too old for her - but, such are her skills and her discipline and judgement that one is left full of admiration. Mr Boulus, Skuthorp, Selmes (I kept wanting to tell him to cut his hair! - not fully committed to the artistry of what otherwise is a good performance annoyed me, intensely), Ward, Rahme, and Ms Hart, Koprivec and all the Chorines are impressive more often than not.

THE WILD PARTY, is an ambitious work. Little Triangle is an ambitious company - their performance of MERRILY WE ROLL ALONG, earlier in the year was amazing. Director and Designer, Alexander Andrews; Musical Director, Conrad Hamill; Choreographer, Madison Lee, are all outstanding and ought to be watched. This company of ferocious musical theatre actors are to be commended for their offers.

THE WILD PARTY is difficult and full-on but it was impressive to have the opportunity to see this work live on stage. Musical Theatre buffs should be delighted to be able to see it whatever their reservations may be. This company deserve your attention.