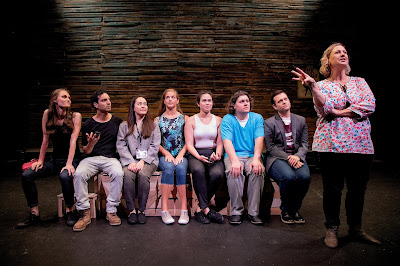 Theatre Travels presents THE LARAMIE PROJECT and THE LARAMIE PROJECT: 10, by Moises Kaufman and Members of the Tectonic Theatre Project, in the Reginald Theatre, at the Seymour Centre, City Rd, Chippendale. 28th November - 8th December.

A new theatre company, Theatre Travels, for its opening foray into the Sydney scene, has tackled THE LARAMIE PROJECT, and its sequel, THE LARAMIE PROJECT: 10. Two plays and nearly five hours in the theatre. It seems to be a season of 'marathon' experiences, what with the Sydney Theatre Company's (STC) recent THE HARP IN THE SOUTH and the Ensemble's production of the trilogy of Alan Ayckbourn's THE NORMAN CONQUESTS.

Both THE LARAMIE PROJECT investigations reveal themselves as still potently powerful experiences in the theatre - the first play is now 20 years old. Moises Kaufman led the Tectonic Theatre Company with GROSS INDECENCY: THE THREE TRIALS OF OSCAR WILDE, in 1997. (I saw that first production off-off-Broadway before its shift to a national and international play of importance).The company researches, and in the case of THE LARAMIE PROJECTs, interview, to build a verbatim script, massaged to produce an insightful and incisive experience in the theatre. THE LARAMIE PROJECT canon concerns itself with the University of Wyoming gay student's torture and murder: Matthew Shepard - a crime that became an international provocation of the Hate Crime.

This young company: John Michael Burdon, Laura Djanegara, Andrew Hofman, Francisco Lopez, Linda Nicholls-Gidley, Matthew Pritchard, Dominique Purdue, Emily Richardson and Charlotte Tilelli acquit themselves with dedicated commitment that illuminate the stories with a freshness and decided detachment that prevents any sentimentality from staining the shocking and provocative political tenor of the material. The two Director's Carly Fisher and Rosie Niven have prepared themselves well (even a visit to Laramie itself) and have chosen a company of fellow collaborators that serve the projects effortlessly. 5 hours of material with 9 actors to play some 75 characters, requires some real foresight - it is no small achievement.

They are assisted mightily with a beautiful but also pragmatic Set Design by Dave Angelico, that facilitates all the necessary changes of location and costume changes, under the care of Adrienne Dell. Martin Kinnane, has a challenging task in supporting the narrative with its many shifts and emotional states, with an intricately successful Design for the Lighting. Too, Hamish Stening, makes a sterling contribution with his Sound Design.

THE LARAMIE PROJECT duo, are important works and are as relevant today as they were then, and as pertinent to the Australian experience as it is to the American one, today. I urge those who have never seen these two works to find a way to capture them - if not both, then certainly, the first (although your curiosity will certainly encourage you to see the other as well).

The Reginald Theatre experience gives the Theatre Travels company an auspicious and ambitious debut. It is a brief season, so go Now.

P.S. Unfortunately, this new company follows the behaviour of the  practice of many of the Sydney Theatres in not acknowledging the writer, Moises Kaufman, and in this case Tectonic Theatre, in their program notes.
Posted by Editor at 11:05 AM