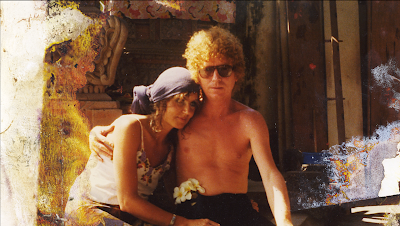 Kim Carpenter's Theatre of Image in association with Riverside Theatre, as part of the Sydney Festival presents the World Premiere of BRETT AND WENDY - A Love Story Bound By Art, in the Lennox Theatre, Riverside Theatres, Parramatta. 18 - 27 January, 2019.

BRETT AND WENDY - A Love Story Bound By Art, is a performance piece Created by Director, Designer Kim Carpenter, the Artistic Director of The Theatre of Image, which is celebrating its 30th Anniversary year.

Says, Mr Carpenter in his program notes: "I created this script like a collage, gathering material from interviews, conversations, books, observations and personal experiences and curated them into a form as 'I can see'".

The work attempts to explore the biographical journey of artist Brett Whitely from that of the boy, to the teenager, the student, the man, the family man, the world traveller, the painter. We hear and see the influences: his original skewed perception of objects and sense of 'wonder'; his relentless pursuit of disrupting the norm; of his appreciation of other great art (look at art before looking at nature); his admiration of Lloyd Rees; the influence of the 'love of his life', Wendy; of the surrounding influence of his parents and of his daughter, Arkie, and the indulgence in the embracement of alcohol and other drugs. One learns in this brief skirmish through the material chosen by Mr Carpenter and shown, details that deliver new insight and validated pre-knowledge of Brett Whitely, that had been accumulated from a life lived at a radical cutting eye view and of his 'fearless' pursuit of his source for and pre-occupations as an artist. His love of beauty and nature and as well, an interrogation of evil and violence - a consuming attraction to opposites - dichotomy.

It is the imagery that Mr Carpenter gives us, what he sees, on the wide white oblong box of the Lennox Theatre stage, where elegantly designed and placed properties and swathes of sensitive paint colour, provide an idealised sense of an artist's studio surrounded by a stimulating world of events that appear in a 'collage' of chosen historical documentary film, of photographic images of art - black and white sketches and paintings - people and incidents of history - social and political -  accompanied by written verbal information, that easily and quietly, triumphantly, whisks us away into a comfortable place of mediation and meditation of the challenging draughtsmanship and content of this prolific 'genius' and his output. The choice and managing of the stimulus of this imagery has a sureness, a confidence and a sufficiency, from Mr Carpenter, as an artist in his own rite, assisted by the Digital Artist, Fabian Astore.

Inside this space, Choreographer, Lucas Jervies (who recently made the Australian Ballet's new SPARTACUS), with three dancers: Robbie Curtis, Naomi Gibbered and Dean Elliott, create character(s) and narrative through moving sculptural imagery of the most beautiful kind. It is swift, poetic and indelible in its affect and glowing force, made most handsome though the Lighting by Sian James-Holland. (The bath tub scene, truly capturing). Too, Mr Jervies creates effective movement (dance) with the company's actors as well.

The 70 minute performance is supported by a score played live by Composer and Musician, Peter Kennard, creating an atmosphere and a spine of direction through tympanic tempo and rightness of a sound, provoking an aural imagery of a deeply resonant, transcendent kind.

Visually, musically, BRETT AND WENDY is great. This is a production of Imagery that is glorious.

The weakness of the work, that is a distract, is the writing - the text. Mr Carpenter seems to have been responsible for this as well, as no Writer is acknowledged in the program - nor, is there of an assistant dramaturge. It is mostly briefly, stated bare facts, and stunted quotations of opinion. There is little characterisation of actual flesh and blood in the actual words to give the actors leverage for creativity, and the actors have been Directed (not Directed?) to merely recite without ownership of character of any depth, or useful contextualised circumstances - they become merely puppeteered mouthpieces.

Paul Gleeson, has the most opportunity to inhabit his text as a living flesh and blood Brett for he has more text to speak and nearly reveals a three dimensional man. Whereas, Leeanna Walsman has little persuasive conviction as the 'verbal' Wendy (physically, though, she is uncanny in a likeness), and nor does Tony Llewellyn-Jones, or Jeanette Cronin, Olivia Brown and young Yasmin Polley, in multiple roles. The actors appear hapless to have impact in the many disguises of character that the costumes of Genevieve Graham provides. The Choreographic portraits of the characters, delivered by the dancers under the aegis of Mr Jervies, are the most convincing identification for the audience.

After last week's disappointing Premiere of SHANGHAI MIMI in Parramatta, this World Premiere of BRETT AND WENDY - A Love Story Bound By Art, in the Riverside Theatre does resonate with an assured artistic achievement that is worth hunting out to catch.