Paul Capsis with Jethro Woodward and the Fitzroy Youth Orchestra 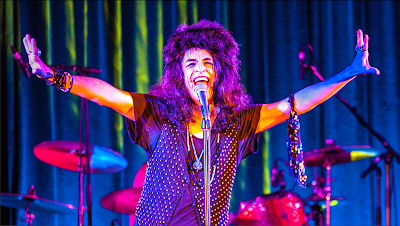 When one witnesses the talent of Paul Capsis live on stage, it puts much else into perspective. This is the Best Show that I have seen at this Festival and it is the force that is Mr Capsis that makes it so - he is unique, special. He not only has the skills, he has 'IT'.

Paul Capsis is a GREAT artist. Every gesture, from his 'mad' costuming, to his excessive wig, and in this case his 'Baby Jane' make-up is a calculated craft with a spontaneous spirit that wants to give. To give to his audience. He does 2oo%.

He lifts the experience of ART into a stratosphere that only a few have the wherewithal to be able to do. Not only does he have a remarkable voice of magic sounds over an extraordinary range (still), but, also, the interpretative genius with the lyrics of his material, supported by vocal equipment that delivers every word - every single word with impact. That quality, alone, is what escalates him into the realms of the GREAT. Aretha Franklin could do it. Frank Sinatra could. So could Bessie Smith, Ella Fitzgerald, Nina Simone, Peggy Lee. (Listen to their recordings.) Paul Capsis can do it and does still.

He has an instinctual 'feel' and seems to channel the energies of the universe, for the musical inspiration of each song that he chooses, and it is vivid and startling in its combination of spirituality and science to watch as he becomes 'possessed'. He moves and jigs - fingers, hands at the wrist, arms and head jerks bringing that wig to a life of its own with its own production vocabulary. He, like a great wizard, seems to summon the original creators to possess him as he honours them.

Each song, in this 1hour and 20 minute Set, from Skyhooks' EGO IS NOT A DIRTY WORD, across Nancy Sinatra's BANG BANG (MY BABY SHOT ME DOWN) - I know the Cher version - to Lou Reeds' A PERFECT DAY, is personalised and owned by the performer with such intimacy that I feel confident in saying that every member of the audience can easily conceive that Paul Capsis is singing directly and only to them - I began to cry during the BANG BANG rendition and that was only the third song in this repertoire. Heartbreak of my own betrayals came tearfully back.

In the Lighting Settings and the Sound Design of the space of the Spigeltent, atmosphere is spun, even at a 6pm gig! And the 4 piece Melbourne Band led by Jethro Woodward surrounds Paul Caprsis with inspired playing in arrangements that are stirring in their affect. They are alight with energy and the joy of doing what they were meant to do.

Now, I have to tell you that I would never play this music at home - I have no real affinity for it - but in the magic that this ensemble exudes I could not have been more mesmerised and enchanted. I surrendered and received an invaluable experience.

Bad Luck if you haven't booked - for this is a 'genius' experience and it is a rarity. It is what makes life worth living.
Posted by Editor at 6:50 PM