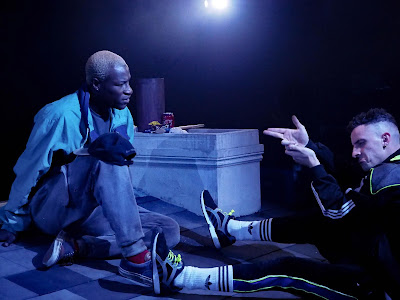 Green Door Theatre Company presents in association with bAKEHOUSE Theatre, IF WE GOT SOME MORE COCAINE I COULD SHOW YOU HOW I LOVE YOU, by John O'Donovan, in the Kings Cross Theatre, (KXT), Kings Cross Hotel. February 8th - 23rd.

This is the first play of Irish writer, John O'Donovan (2016). IF WE GOT SOME MORE COCAINE I COULD SHOW YOU HOW I LOVE YOU, is a two character play, of one 90 minute act. Set in a country environment, Mikey (Eddie Orton) a young twenty-something, of a spikey and belligerent disposition (his fists have won his status), along with teenager, Casey (Elijah Williams), are introduced to us crashing onto the roof top with a cacophony of rock and roll, police sirens and hectic drowned conversation, of a local terrace house, after botching a robbery of the local petrol station. Surrounded by cops they wait it out, hoping to get down to make it to a 'full-on' party. Part of their loot is a bag of cocaine.

On the roof top design by Jeremy Allen, lit in the twilight and fading day time and occasional bursts of fireworks, by Kelsey Lee, dressed in trendy track-suit clothing, masks, and head coverings (Stephanie Howe), and giving an atmospheric and naturalistic Sound design, by Melanie Herbet, these two amateur 'grunts' of aspirational crime skills, talk, as all Irish seem to be able to do, endlessly, about the past: of past events, of past friends and foes - both extended and real family and of their same-sex attraction to each other. "I Love You". Each gets to say it. "I Love You". They have the painful gift of the blather - the gab - and playful menace bristling with the volatile energy of muscled physical threat and danger.

On and on they talk, in an Irish brogue, of some kind that really is an obstacle to understanding what is being discussed and moving us to a place of "I don't give a fuck!" which takes you to: "I don't care!" Warwick Doddrell has elicited a commitment of some force from both actors and initially there is some compensation when watching the actors - for listening to them blather on at an incomprehensible welter of noise was disposed of really, really early on. One had time to ponder and to become concerned at the shouted volume of these men's conversation on the roof of this house at night, and wonder why the neighbours haven't reported to the cops the noise of these two 'idiots' and sprung them. The cops do, at last, return and action does take place, heralding, thankfully, the end of the play.

This play is part of the Sydney Gay and Lesbian Mardi Gras Festival, and has at its centre two rough -trade, working class boys swinging from threatened violence to tender aspirations that may have a sexual patina of sad-masochistic thrill - like that that the characters from the worlds of Joe Orton, Harold Pinter can elicit in the shrouded mystique perfumes of, perhaps, of what it might have been like to meet the Kray twins in Soho (especially if they looked like Tom Hardy: LEGEND) or some underworld figure, who was paying some extravagant attention to moi, in the BIRDCAGE nightclub in Taylor Square in the early seventies! But it is, in the KXT, only an intermittent experience, for it is soon quenched in the weathering rabble of words, words, words - unintelligible noise, noise, noise.

I recommend that you find Francis Lee's 2017 film, GOD'S OWN COUNTRY, for a more rewarding night than that here at the KXT Theatre. Working class men, awakening. Leaves BROKE BACK MOUNTAIN for dead. Trust me.

IF WE GOT SOME MORE COCAINE I COULD SHOW YOU HOW I LOVE YOU, is a title of challenging verbosity that besides being, arguably, the best bit of the writing, ought, also to have twigged me to the kind of night I was going to have. I wished that I had had some cocaine to be able to say HOW MUCH I LOVED IT. I didn't and I can't.
Posted by Editor at 2:16 PM