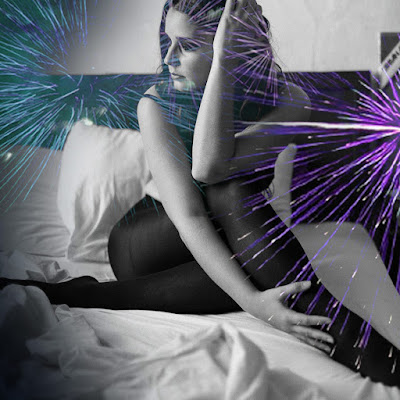 The Set has a large bed. On it gathers a group of five friends, five lesbians. We are at a Bed party in a shared house.

Jasmine (Brigitta Brown) arrives with her latest date relationship, Finn (Alex Moulis). They are interrupted by long time school friend of Jasmine's, Tara (Suz Mawer), who lives in the house, having declared herself bi-sexual, and is in a kind of permanent crisis of identity. An excited woman in the throws of a new last night romantic meeting, George (Mathilde Anglade), bursts into the room with an irrepressible fire-cracker energy, and in contrast, Bri (Julia Billington) fleeing a relationship with her recent partner, Kelly (Margarita Gershkovich), that has political rifts of different needs, joins this assembly and has an almost stream-of-conscious disquisition about life and living.

During the spread of time over a day or two which we spend with this group of women, those of us who are not intimate to this female world are taken into the argot, physical relaxations and friendships that are subtly nuanced in there similarities and many differences to the hetro-world and the male gay world that I participate in. One learns a lot in a very easy way. They talk uninhibitedly about many things going from 'thing to thing' and we listen with a fascination for the new - ears trained - for their personal stories, steeped in revelations.

THE BED PLAY, is a very good play. It is a refreshing exercise in the theatre and this play is wonderfully written in its covering of so may gamuts of revelations. There are no false notes of dramatic impasse, there is reasoned talk sauced with a comfortable doona that encourages true care and love. The characters, naturally, tell and deliver, quietly, a perspective from a part of our society that has felt locked away, repressed, invisible. Here is a world that is anything other than a Pandora's Box of confrontation. It is funny, wise, and best of all, normal. Oh, wow! The webbing of the unknown unravels a little and lets us in to see:  Lesbians, together, are just like anyone else when they are together. Humans trying to work it all out from their life point-of-view and honest selves.

The writer has also Directed this play and does so with some confidence if not with consistent finesse. The performances are all 'charming' and effective within the range of the various actors skills and ease. All, however, are not equal and this is where the dynamics of the writing is sometimes made opaque. It does not disarm the performance but it weakens it.

Mathilde Anglade, as George, gives the most natural and complete performance having an ease, a sense of wit and daring of detail, spiked through with intelligence that is unselfconsciously charming and seductive. Julia Billington's Bri hits her stride in the politically fraught and fascinating conversation with her ex-partner Kelly in the latter scene of the play, as does Suz Mawer when the emotional world collapses around her, Tara, with a long time coming revelation.

The season is short but, truly, is arresting and enlightening. Catch it if you can.
Posted by Editor at 2:06 PM