Wyngarde! A Celebration, and Queen Bette 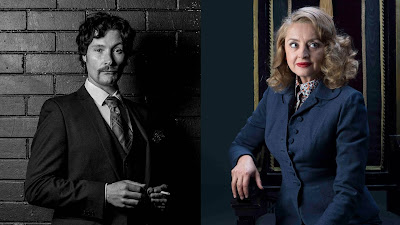 It is so interesting to see these two works together and observe the gifted 'sleight-of-hand' that Mr Mountford brings to both the works, as a Writer and a Director. Seen individually, the skill of the artist might not be really noticed, seen as a pair, his skill shines through and deserves full appreciation. The angle from which he approaches and enters the lives of these artists and the balance of text, mime, 'dance' and costume changing to create mood and propulsion for the storytelling are all moderated into theatrical gestures that give pause and, maybe, depth, to the proceedings.

Peter Wyngarde is a curious choice to celebrate and spend so much time with in the writing and living. He was a man of moderate talent but with obvious physical charm and a flare for appearance, who became famous as television character, Jason King, first in DEPARTMENT, and then in a spin-off television show of 26 one hour episodes (one Season) called JASON KING (1971-72), that was appreciated as much for the 'spoofy' games of this novelist/detective in the action of each episode, but also in the 'campy' costuming and make-up, hair style of the performer. Jason King/Peter Wyngarde became a kind of fashion icon, mobbed by the Australian female public when he visited. (Mike Myers claims the decorative appearance of his Austin Powers was inspired by the inimitable Jason King and vapid panache of Mr Wyngarde.

In the inter-active touches with the audience, Mr Holcombe brings the hauteur of the early '70's self-amusement of Peter Wyngarde, as well as a deepening sense of melancholy on consideration of the result of his life work. Always, at least on stage, the second-tier actor, surrounded by friends and talents as significant as Alan Bates, Richard Burton. Peter Toole, and in pulpy throw-away television, the shadow of the possibility of mediocrity haunted him. Too, he, late in life, revealed his homosexuality and his fear and shame may have 'forced' him to a living lie, preventing real truths to support his striving for the quality wanted in his work. He finishes alone. He finishes an alcoholic. He finishes sadly. Mr Holcombe gives a consummate performance.

On the other side of the interval, Jeanette Cronin, once again embraces the star quality of the ferocious and driven Bette Davis. It is a tour-de-force of intelligence and energy supported by an uncanny resemblance to the actual woman that can startle one into a kind of awe - "You" it says, "are in the presence of Miss Bette Davis, so, don't look away or I'll devour you!" The Playwriting insists the actor to avoid the typical 'campery' of verbal quotes and caricatured physicalities that might tempt a less interesting actor and, instead, focuses on the core of this artist and the purity of her actions to create art. This is Bette Davis the actor not the commodity. This Bette Davis is not the actor/priestess at the altar of Thespis but is, rather, the sacrifice on the altar. She gives her all, professionally and personally, to bring a story to an audience and demands that all of her fellow collaborators who come into her sphere of creativity to do so too. Ms Cronin fearless demands it of you. Notoriously, Ms Davis took no prisoners if you didn't hit the mark. She was not necessarily the Studio's favourite actor. But her indelible achievements lie in the film 'chests' of history for you to appreciate, to see what was what, in her time. No matter the undoubted melodrama of some of her vehicles there is no escaping her daring, brilliance. Her timeless appeal to her audiences.

WYNGARDE! A CELEBRATION and QUEEN BETTE are a must see.
Posted by Editor at 12:45 PM