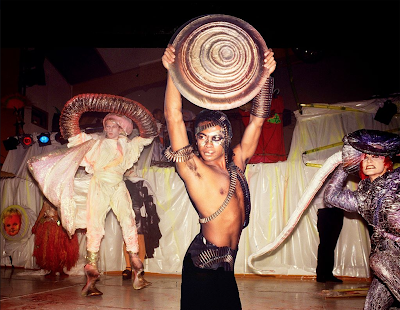 PARTY (verb) devised by William Yang, in the Playhouse, at the Sydney Opera House. 10th and 11th May.

I first knew of William Yang when he was Willie Young and part of the cast of the iconic original production of THE LEGEND OF KING O'MALLEY, written by Michael Boddy and Bob Ellis, in 1970, and recently re-staged at the Seymour Centre in 2014. Willie was part of the troupe that created, under the Direction of John Bell, as an an actor/singer/musician. Later, I remember him as part of the Rex Cramphorn Company in his Studio experiments on some of the Classical repertoire. Willie was never an actor really. Then, other than seeing photographs of him at dinners at Patrick White's he kind of disappeared from my radar. Later, he re-appeared in my life at public parties where he always carried a camera and clicked away at the scenarios. He always dressed as himself and seemed to be content just to wander around and click, click, click.

In fairly recent times, as William Yang, he has curated his photography to create published photographic essays in book form and launched a career on the stage showing, thematically, some of his photographic work - a kind of slide-night - (the quality of the photography as photography is debatable, but as historical record, invaluable) - where he acted as a verbal interlocutor to place the work in context. I have seen several iterations of this endeavour.

PARTY (verb), is the latest offer. It concentrates in presenting a photographic history/memory of the infamous Dance Party culture of Sydney from the early 1980's up until the present. There were only two performances. The night I went - the first performance - it was like being at a gathering of old friends come to remember those old times. One saw friends that one thought were dead as well as other friends who were at the last Bad Dog or Kooky Party a month or so ago. It was a family get together, it felt warm, inclusive and special. This was a family gathering come to relish and indulge in joint ecstatic memories - one was wondering who had been captured and, was to be shown, while secretly hoping, that they might be up there in one of the photographs.

Accompanied with a soundtrack presented live by Jonny Seymour and Paul Mac performing as as Stereogamous, standing to one side of a projection screen, William Yang in a flat and mostly lugubrious voice introduces and, sometimes, elaborates about the individual projected images and of the history of some of the participants. It turned out that this show of the Dance Club phenomena became also, sometimes, a very personal journey, for Mr Yang, as we meet ex-lovers and companions across the time era that included the AIDS epidemic. It became a little maudlin, though, highly respectful, and for some of us, ultimately, fairly moving.

If you have attended other iterations of this formula from Mr Yang, there was nothing really new here - it was fairly familiar in its mode with the curiosity of the selected image/memory the sustaining element that kept one present. At 80 minutes it only just began to wear us down- you know, like any slide night can do.

Most of us were glad to have made the effort to come even though in all of those photographs of the parties and the memory of being confronted by William's lens, one did not appear in the haze of the dance spaces over the almost 40 years of coverage of this show. We got to feel warm with our chosen 'family' and were happy to be re-acquainted and have our past drawn into the present.