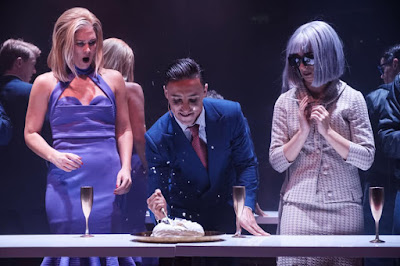 BB Arts and Two Doors Productions in association with Hayes Theatre Co presents, AMERICAN PSYCHO - The Musical. Book by Roberto Aguirre-Sarcasa, Music and Lyrics by Duncan Sheik, based on the novel by Bret Easton Ellis, at the Hayes Theatre, Greenknowe Ave., Darlinghurst. 16th May - 9 June.

AMERICAN PSYCHO - The Musical, is an adaptation of the 'infamous' novel by Bret Easton Ellis of 1991. It is a satiric observation and skewering of the American values of the 1980's in which the (anti-) hero, Patrick Bateman, a corporate aspirant, among many other idiosyncrasies, regards Donald Trump as a figure of admiration. It is an ironic note that we in 2019, 28 years later, are engaged with 'a media-saturated society where a narcissistic, greedy misogynist with severe status anxiety can become the leader of the free world'. Donald Trump is a prescient mentor, indeed, for the Musical's hero Patrick Bateman. This deliciously terrible outcome/parallel gives the musical adaptation some possibility of a fearful edge.

The novel became a film in the year 2000, starring Christian Bale, and was, interestingly adapted by a Guinevere Turner (an out Lesbian, so Google tells me) for Director Mary Harron, which gave the screenplay and subsequent film an interesting 'slant' to the over the top misogyny and toxic male violence of the original novel. The gay and feminist perspectives provided the material with a challenging context. I enjoyed the film very much way back, 19 years ago.

AMERICAN PSYCHO - The Musical, in the Book by Roberto Aquirre-Sarcasa seems to have leant further in that direction and in this production of the Musical by Alexander Berlage is embraced with the emphasis emphatically on the 'camp' aesthetic, in its design both Set (Isabel Hudson) and, especially, Costume (Mason Browne) - all three of these artists having so successfully collaborated last year in the wonderful over-the-top-campery of their production of CRY-BABY last year at the Hayes. Susan Sontag wrote that: the hallmark of Camp is the spirit of extravagance. And although Mr Browne does not have the budget to do it: Camp says Sontag, "is a woman walking around in a dress made of three million feathers". Mr Browne does marvels with what he had to spend for what he wanted the show to be without the three million feathers. As does Ms Hudson and the choreographer, Yvette Lee, taking full advantage of the Designers offers and the undoing of the creative leash that Mr Berlage gives her to play in.

This aesthetic is carried on in the casting of Ben Gerrard as Patrick Bateman, who has made such a splash with his appearance and style in work such as I AM MY OWN WIFE, BUYER AND CELLAR, at the Ensemble Theatre, and, spectacularly in the recent Bell Shakespeare/ Griffin adaptation of Moliere's The MISANTHROPE, where his creation of Cymbeline seemed to be a flawless/seamless identification with the narcissistic inclinations of some of the world about him, with a performance that had the shirt off more often than on. Mr Gerrard followed on with an investigation of one of the leads in ANGELS IN AMERICA, at the Old Fitz. All in all, this CV is quite a collection of gay men of extreme temperament to work on - not that Patrick is gay, just that he has those exaggerated qualities - which this production shrieks out for. Mr Gerrard has had plenty of practice to get to Mr Bateman and toy with it under the permissive Direction of Mr Berlage.

Mr Berlage and his team, with a musical adaptation of the score by Andrew Worboys (there is no live orchestra), grab back to a Set Design that like Mr Berlage's first introduction to the Sydney Theatre scene with his graduation production from NIDA, THERE WILL BE A CLIMAX, (later seen at the Old Fitz), revive the trope of the continuous turn of a revolve to help create and propel the relentless energy of the work - one thinks, exhaustedly, during this performance: 'When will the revolve ever stop? and, later, 'Is there a metaphysical meaning to when the revolve reverses into the anti-clockwise mode, or not?'

All of the action is reflected in three rooms of mirror, creating an illusion of a crowded self-obsessed humanity that values image over any sense/glimpse of character depth or empathy. The shimmer of ice-cold perfection is the universe of this stage vision (perforce of the content of the novel), illustrated, amusingly, in the famous competition of the young corporates over the 'elegance' of one's calling card.

It is lit in support, startlingly, in primary colour, and fluorescent tubing, also by Mr Berlage, glowering in, mostly, a black-hole/abyss, to give a cutting edge to the look of all the bloody action of the story. This production of AMERICAN PSYCHO seems to be a natural for the present Sydney audience's pre-occupation that counts appearance/style over any serious interrogation of the content of the work.

Patrick Bateman is both the principal character in the action of the story as well as being the narrator. It confronts the actor with a demand to sit comfortably as the subjective experiencer of the events of the work as well as being required to step out of the narrative and take on a sardonic, dry, smart-mouthed objective commentator of the action. Slipping in and out of those guises is a kind of circus trick that makes demands for a technical feat of some skill. Mr Gerrard manages it with panache, using a repertoire of physical and vocal gestures that we have enjoyed in most of the work we have seen previously, in his stage (and television manifestations), but, which also could leave the audience in a disconnected position of nodding (I've seen this before) while watching the familiar mannerisms.

This was not, for me, too much of a problem, but was one that revealed the performance as lacking in spontaneity or originality, especially surprise, and when compared to the relative 'weakness' of Mr Gerrard's singing voice was almost not remarkable. Mr Gerrard is undoubtedly an accomplished actor but has, merely, an adequate singing voice. That that voice had to carry the central figure in a Musical who barely leaves the stage and has a huge musical demand, seems to be huge risk. For, on the night I saw the performance, he did not seem to have the added 'oomph' to pitch his sound over and above the accompanying chorus and orchestrations, and, so, relatively 'disappeared' in vital moments. It was never more worrisome than in the final song, 'This is Not an Exit', when Mr Aguirre-Sarcasa (Book) and Mr Sheik (Music and Lyrics), attempt to give Bateman a redemptive dimension and a gesture to suggest that he is a human just like all of us in the audience (in this production he leaves the stage and sits with his audience looking at the other players, identifying as one of us). Mr Gerrard did not have the vocal power or the warmth of sound to convince us of this contrivance - this pivotal moment fell flat - one was not convinced that Patrick Bateman was a human worth embracing or forgiving. Patrick Bateman remained a bloodless murderous psychopath - frightening.

The rest of the company are startling in the commitment to the demands of this production requiring them to shift scenery and location, change costume, sing untiringly,, and dance effortlessly while negotiating the ever turning stage-revolve. Shannon Dooley (Evelyn Williams), Liam Nunan (Luis Carruthres), especially, create characters that stick in the mind despite the obviousness of the dramaturgical function, while Blake Appelqvist (Paul Owen) steals the show with an ease of presence, having a physical plasticity and accompanying singing quality that could, perhaps, take on the role of Patrick Bateman with ease and power (recently I saw Mr Appellqvist in a solo role, in a new Australian musical DORIAN GRAY NAKED, and was mightily impressed - a Star?)

The 'politics' of the novel and the film, and, perhaps, even of this musical version of that source material that "ambition is an instinct necessary to survive, and empathy can be switched on and off when convenient. (and) Perhaps the only way to break such a cycle is to strive for authenticity and rediscover what actually makes each of us happy, mindful and above all else, human ...' (Program notes), seemed to me relatively elusive in this dazzling production. The textual content and its tools of telling seemed to be about a decade or two passé - the events and times have moved on. Of all the novels of that time the social impact and heritage of AMERICAN PSYCHO, may be, mostly, today, famous for the the sensation of its original scandal and the scary fascination that we have as a species for the bloody serial killer that may be stalking our neighbourhood. BONFIRE OF THE VANITIES, the 1987 novel by American Tom Wolfe , a work studying the same times, sits higher as a superior work of satire and literature, I reckon - a Dickensian-like forensic study of a society in terrible straits (it was by the way, a terrible film).

AMERICAN PSYCHO - The Musical, at the Hayes Theatre, is a dazzling production, that is relatively empty in its content impact. Sydney should love it. I was admiring but unmoved.
Posted by Editor at 9:22 PM