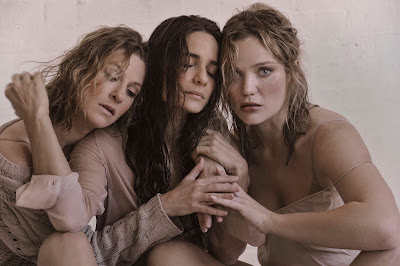 ANATOMY OF A SUICIDE, is a play by English writer, Alice Birch. REVOLT SHE SAID. REVOLT AGAIN was seen at Old 505 and her screenplay LADY MACBETH (2016) heralds a fearless writer examining the place and role of women in the world. ANATOMY OF A SUICIDE, places three women, Carol (Anna Samson), Anna (Andrea Demetriades) and Bonnie (Kate Skinner) on stage side-by-side in front of a spacious house which all three live in. The play unwinds with the three women speaking at the same time or separately, supported by a collection of seven other actors: Danielle Catanzariti, Jack Crumlin, Teale Howie, Charles Mayer, Guy O'Grady, Natalie Saleeba and Contessa Treffone, who create some twenty one characters that interact with the three principal women.

The play begins in a welter of text where the three principal women create a kind of chaos that might reflect the jumble of the mental state of the three spinal cores of the narrative, of Carol, Anna and Bonnie, as they negotiate their lives. Gradually, we begin to discern through absorbing the Costume design details and the mental sifting of the textual information that Carol is living in this house in the '70's with husband John (Charles Mayer), and following the expectations of her cultural time has a child: Anna. That she falls into a post-natal depression is not understood by those about her who diagnose that the having of another child might help to stabilise her. Carol, after bouts of wearying treatment in the medical system of the period, finally suicides.

Anna is Carol's child now adult and is living in the house in the '90's, a disturbed individual, a social rebel, who has embraced a heroin addiction to survive her emotional fragility, trauma, not understood by her ineffectual father, John. She meets Jamie (Jack Crumlin) who helps her clean-up and together they marry and move into the family house and, following the norms of the time, ultimately, have a child, too: Bonnie. It is the trauma of child birth and its upbringing that plunges Anna back into addiction and a life of erraticisms that leads to fierce treatments (e.g. electric shock therapy) that end in the option of suicide as the choice for survival.

Bonnie is the granddaughter of Carol, the grown-up daughter of Anna, living today or in the near future in the inherited house. She has become a Doctor and in the daily confrontational pressures of her work place and trying to solve her sexual identity finds herself spiralling into emotional vulnerability and possible inclination to suicide. Bonnie desperately tries to find a solution to what may be another family inheritance, beside the house: a propensity to suicide. But the authorities of her time hinder her ability to take the action she feels may protect her from her 'destiny'. Bonnie demands that she take agency of her body with sterilisation that may prevent what she suspects is a genetic inheritance, that of suicide. She wants the family 'trait' to stop with her. But her needs must be faced with obfuscating medical counselling, so Bonnie may not be able to survive that emotional demand.

The play finishes without resolution. Does it conclude with hope? One hopes so as the lights subtly change infront of us.

Alice Birch has thrust unequivocally three women and their issues centre stage and around them the worlds they live in with the social, cultural and political influences afflicting them in the ordinary living of life. Kate Skinner is outstanding as Bonnie, as is Andrea Demetriades as Anna, in the revelation of their women, with detailed and sensitively lived choices offered painfully to us - they are extraordinary in what they create (suffer) for us to identify with, while Anna Samson reveals a demanding immersion in created depression, but lacks the theatrical finesses, the refined edge of sharp storytelling-pointing, shown in the work of her two partners. Ms Samson's work is sustained and moving but is blurred in its clarity of objective intention.

The company of actors are astonishingly clear in their multiple roles and in the objective contribution to the thematic trauma of Carol, Anna and Bonnie. The many scene shifts and time adjustments are handled under the Direction of Shane Anthony with gathering purpose and nuance of clarity, instilled comfortably in his actors.

The other women in the cast are significantly eloquent in the action of their various characters with Ms Saleeba remarkably sure and convicted, while Ms Catanzariti is deeply moving in her principal journeys (including Anna as child). Ms Treffone has theatrical intelligence but often underlines the emotional journey of her women without sufficient character demarcation. The work evolves, mostly, from her own personality, with little focus on the differences of her several women: all three could be a singular persona.

The men of the company are, relatively, undercast and so the characters are, in contrast, mostly, only shadows of their possibility both in delivering dramaturgical function and fully owned character, and although the male characters are in the writing supporting roles they are important and ought to be better realised to maintain the density of the truthfulness of the three time zones and worlds. There is opportunity provided by Ms Birch but is not engaged in fully by the men to varying degrees of intent.

The Set Design by Shane Anthony and Gus Murray is a beautiful backdrop to the psychological action while the complicated and detailed Costume Design by Siobhan Jett O'Hanlon is a very important tool in supporting and clarifying Ms Birch's remarkable play. Lighting Design is by Veronique Benett. The Sound Composition is supplied by Damien Lane.

ANATOMY OF A SUICIDE, is worth seeing. I thought essential viewing for serious theatre goers. It is the kind of play that demands the audience to make active contribution for it to be fully appreciated. It gives us puzzles and invites us to solve them to gain the most from the two hour of stage time. It assumes that we are intelligent and does not resile from that complimenting assumption.

As with the recent production of PRIME FACIE this is valuable time spent, in a form that only the theatre can give you. The text is a formidable read in its layout, and so what Mr Anthony and his actors have done in staging this work is undoubtedly of a high order of theatrical nous.

I saw this play in London in 2017 and I loved it. I thought having them all on stage at the same time was fascinating. I wondered whether it would get to Australia. I was hoping for it to be shown at the Adelaide Festival