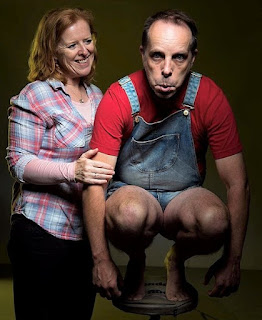 Trevor (Jamie Oxenbould) is a 200 pound chimpanzee, adopted and kept by Sandra (Di Adams), in her home. She is a single 'parent', her husband having deserted the home front. Trevor has had a limited 'career' in the entertainment industry with his appearance on a talk show starring Morgan Fairchild (Eloise Snape), a one-time soapy star.

In this play by American writer, Nick Jones - mostly television;ORANGE IS THE NEW BLACK, GLOW - Trevor has an anthropomorphic relationship with us, the audience, as he confides to us his view of his life's given circumstances - his growing frustration with the continuing downward spiral of his 'acting' career that has not even provided recent audition opportunities and the resultant frustration of the non-recognition of his great talent. If you know some actors the text may sound as a familiar rant!

On the other hand Sandra and other humans in the sphere of Trevor's existence: next door Ashley (Ainslie McGlynn) mother of baby, Police Officer, Jim (David Lynch) and veterinarian Jerry (Jemwell Dannao), presents a contrasting point-of-view of Trevor's growing dangerous behaviour. These contrasts of the opposite, different perspectives of the events of the play provides the audience with a great deal of good-humoured comedy - and the fact that the play moves to a darker place of catastrophe does gives pause to the indulgent good humour that we have participated in giving to the play's narrative experience, despite our instinctual sense that this set-up will end very badly. Depending on how deep a commitment you personally have in your ability to positively anthropomorphise your pet or objects, you might be distressed by what happens.

'Does this play have a moral edge of confrontation?', you may ponder, 'or, is it just a light weight gesture of nonsense?'

If you lean towards the second choice of how to read this play's content, the compensation for the consumption of one's time spent in the theatre is in the appreciation of the usual wonderful work of Jamie Oxenbould as Trevor - his creation of his talking chimpanzee is so simply pleasing, that it commands awe. The consistency of Mr Oxenbould's talented offers in Sydney's theatre scene is further sustained here.

This performance is further balanced with a fully convincing naturalistic creation by Di Adams of Sandra, Trevor's keeper, that has all the compassion of a truly lonely figure reaching for a companionship - responsibility - that has, unfortunately, developed into a serious co-dependency, that weights her affections in her relationship with Chimpanzee Trevor, and blinds her to the alarms signalled by the other humans in the world about her.

The other actors in this production carry their supporting roles with an earnest reality and restraint that adds much to the 'tragedy' of this comedy. Garth Holcombe as Trevor's imaginary actor rival, Oliver, is also an amusing counterpoint - both their simian egos at competition with each other (very LA-like).

Set and Costume Design by Jonathan Hindmarsh is aided and abetted by the lighting of Kelsey Lee, and the Sound Design of Melanie Herbert, in creating a real world that grounds the play into a recognisable truth.

TREVOR, is an okay night in the theatre. The actors do so much to make the time spent with the conceit of the play relatively fun. As you like it.
Posted by Editor at 6:51 PM