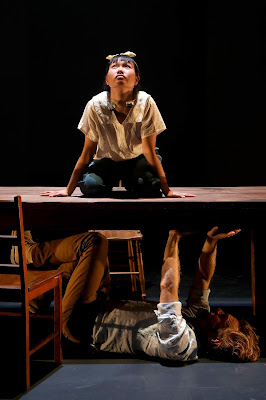 TABLE, is a 2013 play by British playwright, Tanya Ronder.

David Best builds a table in London somewhere. It is later taken to Tanganyika, by a family member, Sarah, as part of her missionary 'dowry'. It shares in the 'adventures' of this family and in due course returns to South London. A table, six generations. A table that witnesses the dramas and triumphs of the family Best.

The play is a neat old-fashioned evening and has the talents of the actors playing 23 different characters over a century or more to bring it passionately to life. Julian Garner is most impressive as Jack and especially Gideon where he has a spectacular dramatic tension with Danielle King, as Michelle.

The rest of the company: Stacey Duckworth, Chantelle Jamieson, Matthew Lee, Brendan Miles, Nicole Pingon, and a pleasingly restrained Annie Stafford, with always reliable and winning Charles Upton, give good illumination to the Direction of Kim Hardwick who has lavished great care onto this play. The Set and Costume Design is by Isobel Hudson, enhanced by the subtle and detailed Lighting by Martin Kinnane. There is a fairly robust Composition and Sound Design from Nate Edmondson that places with aural mood and detail the history of the table and its locations.

This play though lovingly cared and rendered by these artistic creatives was a slight and romanticised exercise, for me. I longed, as the night passed, for the rigour and surprises of the memoir story of THE HARE WITH AMBER EYES. Written by Edmund de Waal, it tells of the confiscation of the property of the Jewish family, Ephrussi, and the survival of 264 Japanese Netsuke (miniature sculptures), and their hidden journey through Odessa, Paris, Vienna and Japan across the century, 1871 until 2003, and its influence on the people who kept them together, over a time cover similar to the TABLE.

The play and this production is a pleasant evening in the theatre. I, perhaps, unreasonably, wanted more said, with less cliches of the dramatic concerns.
Posted by Kevin Jackson at 7:37 PM