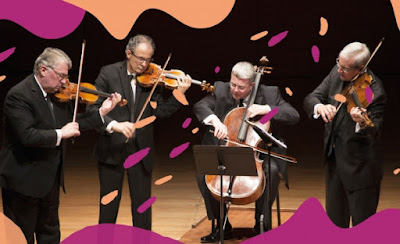 The EMERSON STRING QUARTET. One of the world's great string quartets. They must be heard live. I have their recording of the Shostakovich Quartets (2000), which may account for part of my love obsession around all of the music by Shostakovich. Included in Program One was a Shostakovich quartet scheduled - so, no brainer - I had to attend.

The Emerson String Quartet, which took its name from the American poet and philosopher Ralph Waldo Emerson was formed in 1976, while they were studying at Juilliard. In 2013, the Quartet was reconfigured when cellist Paul Watkins joined the original members of the Emerson Quartet: Eugene Drucker, Philip Setzer and Lawrence Dutton.

I know little musical repertoire and all this music was new to me. It is strange to hear music that one has not the slightest knowledge of. I found myself sitting in the concert hall, hoping that a familiar melody would be played to comfort one with the glow of recognition - an acquaintanceship. It didn't happen - there was no recognition of a single 'melody'. But the beauty of the musicians and their control and soul-bearing energy entranced one enough into a state of transfixed awe to give satisfaction.

I do not believe I am a fan of Beethoven - a capital sin, I am supposing - but the sheer concentrated skill and devotion of the Emerson Quartet drew a spell of contentment and insight in the quartet's post-interval rendition of the Beethoven contribution that, especially, in the third and fourth movement (the Finale) skipped into a jaunty mood surging with a Russian folk tune quotation that may have (may have) awakened a memory. It certainly had a feel of youthful energy, of Spring, and I was subsumed into an all embracing of Beethoven's quartet.

Brexit, Trump and Scott Morrison. Economic woes and the tension caused by the unprecedented fires ravishing our country, the dread of irreversible Climate Change, all seemed, relatively, distant, as one applauded the gift of the music that the Emerson String Quartet had just given. One left the Recital Hall, high on life.

Of course, I was rewarded with the Shostakovich, as I had a familiarity with it. from my CD collection. The pain and agony of the composer weathering the condemnation of Stalin, haunts this quartet through and through. The humanity of the composer was bared with great restraint and respect: Honour, by the Emerson Quartet. Their ability to translate with superb skills and amazing  empathy the grief of the composer from instruments to instrument, must have cost the players much. The performance was astounding.

Musica Viva, congratulations for bringing the Emerson String Quartet to Sydney (philistine Sydney - the Hall was not sold out in either concert.) These two performances were great musicianship and emotional experiences of some powerful depth.

(I wondered sometimes whether the musicianship was so excellent in its sensitive detail and playing whether it rendered the quartets a little too drily? The Australian Chamber Orchestra (ACO), a jewell in the Performing Arts experiences in Sydney, have a skill as wondrous as the Emerson Quartet but deliver, I think, a lustre of flowing life, a fluidity of sound that is more accessible. Still, neither of these two musical cohorts should ever be missed.Dedication that can deliver genius, I think.)
Posted by Kevin Jackson at 4:19 PM