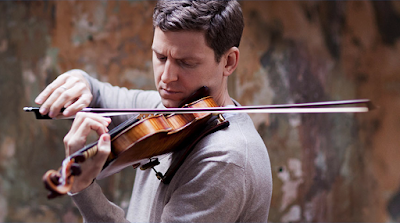 I reckon that you can trust the Russian composers for a great experience in Concert. So, it was last Saturday.

I had never heard the Khachaturian Violin Concerto in D minor ever. In fact I know little of the output of Khachaturian, the ballet scores: GAYANE and SPARTACUS, the most familiar.

Aram Katchaturian was of Armenian extraction, educated as a child in Tiblisi, Georgia - that city being important to Josef Stalin.

Stalin was extremely interested and demanding in his concerns for the influence of the Arts on his citizenry and, in particular, that of the influence of Music. During the domination of the Soviet by Stalin from the mid-1920's until his death in 1953, as General Secretary of the Communist Party of the Soviet Union, the three regarded composers of the Soviet were Khachaturian (1903 -1978), Shostakovich (1906 - 1975) and Prokofiev (1891 - 1953).

Prokofiev lived mostly in the United States (with Soviet sanction) after the 1917 Revolution until a voluntary return to the Soviet in 1936, but both Khachaturian and Shostakovich remained in their homeland and weathered the demands of the tyrant, Stalin, as to their musical output. It seems that Khachaturian was the most compliant in fulfilling the demands of the officially-approved classicism of Socialist Realism entwined with his passionate love of his heritage of the folk songs and dances of Armenia, Azerbaijan and Georgia - and except for a very brief period was the favoured Soviet Composer and was publicly rewarded.

The Violin Concerto in D minor was made in 1940 (during World War II) and became an enormous success, approved by Stalin and the war feverish citizens. It is a lush escape into a romantic musical heritage, especially in the introspective focus of the second movement (andante sostenuto) that sweeps one away into a kind of blissful 'heaven' of an idealised Russian 'sound'.

The solo work of Canadian/American violinist (he trained at the Juilliard School - 1993 -1997), James Ehnes, was outstanding. Looking 'cool', holding his 'Marsick' Stradivarius of 1715, with what appeared to be a concentrated nonchalance over the approximate 35 minute playing, he subtly wove a magic control of his responsibility with a very sympathetic and supportive orchestra, wonderfully conducted by, Mark Wigglesworth (the principal guest conductor of the Adelaide Symphony Orchestra - how lucky are they?) Modest but spectacularly gifted and prepared, Mr Ehnes received a tumultuous response from his audience which he further gratified with a thrilling virtuosic solo encore. One went into the interval energised with a romantic optimism that, even if only momentarily, the cares of our traumatic world became a faint issue.

The second half of the program, Dimitri Shostakovich's Symphony No.4 in C minor, Op,43, that demands a very large orchestra, crashed into our presence, literally, sonically CRASHED, introducing the reality of what it may have been like to be a creative artist under the ruthless scrutiny of Stalin. The score over its lengthy 60 minute duration teases us with what could be a parody of the Socialist Realism 'grand style' demands of the regime riddled with what could be interpreted as sudden musical imagery of the desperate bleakness of the soul. (One is required to ponder.)

Shostakovich was one of the Soviet artists that did not leave his country but loyally and dangerously stayed with his comrades and attempted to survive with integrity. Julian Barnes' 2016 novel, THE NOISE OF TIME, is a great insight into the possibilities of the exhausting life - physically, psychologically and emotionally - that Shostakovich elected to endure, alongside his family, to create music in what I call, romantically, Russia (other than the USSR - Soviet).

This great Symphony was almost completed, it written in 1936, during which time his highly received opera, LADY MACBETH OF MTSENSK DISTRICT, was viewed by Stalin himself in that January. There followed soon after an anonymous critique, in the Communist party newspaper, Pravda, which condemned the work without mercy - and suddenly Shostakovich, a musical hero of the times was regarded as a traitor to his country, and was deserted by his fellow musicians and the general public - his life seemed to be in possible jeopardy. Was this article in Pravda written by Stalin, himself?

The result was that the 4th Symphony was withdrawn by the composer from performance - shelved judiciously for fear of further denunciation, or worse. The 4th Symphony had its first performance in 1961. Stalin had been dead for 8 years. The 5th Symphony appeared in late 1937 and it was praised for its accessible style and Shostakovich became rehabilitated with and by the Soviet hierarchy. Just how much of a dissident was Shostakovich is one of the great debates concerning his work even up to today. I have been persuaded he was one of the great creative artists who lived all his life in the Soviet defying the tyranny of power as best he could, most subtly in the midst of a terrifying quandary where interpretation becomes the defining element of intent. I try never to miss a work played live, written by Shostakovich. And, one should not neglect the chamber compositions - their tempestuousness is thrilling and arguable. What more does one want from art?

Mark Wigglesworth majestically and with great passion led the Sydney Symphony into a performance that shook his audience into a spell bound embrace. The contrast of efforts, the contrast of noises in the time of the composition's length: fast and slow and all in between, loud and soft and all in between, tonal range from top piercing spears of pain to melodic bathing romanticism and all in between - seemingly influenced by Mahler - from solo instrument to the full orchestra were 'tools' of great manipulative control. I was forced to 'think' while listening not just 'feel'. This was a composition of humanity revealing the pain of a single artist daring to reflect, perhaps, the pain of betrayed comrades, fellow patriots. The Nazi's and the Siege of Stalingrad was soon to come.

The 4th Symphony is still, relatively, under represented in the concert hall. One is so much more familiar with the popular and accessible 5th. But after hearing this rendition, could the 4th Symphony become recognised as the GREAT work of Dimitri Shostakovich?

One can always trust the 'Russian' composers for an experience in the concert hall.