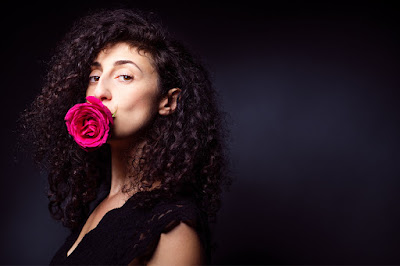 In Shakespeare's ROMEO AND JULIET, Romeo, a son of the Montague's has been wandering in the woods alone, "[w]ith tears, augmenting the fresh morning's dew/ Adding to clouds more clouds with his deep sighs." All, he thinks, for his love of Rosaline. Later, that evening he breaks into a party held at her cousin's Juliet's home to be close to his Rosaline - both women, daughters of the enemy family of Verona, the Capulets. On seeing Juliet, Romeo, instantly, falls in love with her and the prescient admonition - chiding - that Romeo's priestly mentor, Friar Laurence has given him "for DOTING, not for LOVING" Rosaline rings, fatefully, true. ("Dote" means to be infatuated or foolishly in love, or in love with the idea of love - it comes from the same root as the word meaning "to take a nap".) Romeo's 'love' has been an artificial one - he has been in a stupor, a dotage of adolescent indulgence. Rosaline is forgotten, post-haste, and Juliet becomes all.

In Shakespeare's play we never learn much about Rosaline. She is glimpsed, once, at the Capulet ball, but she is not a dramatic character in the play: she has no lines. What we know of her is Romeo's and his 'mates' projection. Part of Romeo's frustration (attraction?) with Rosaline maybe that she has "sworn that she will still live chaste", that she will die a virgin and without progeny - a challenge that any red-blooded Italian machismo might take up! (Juliet, then, on sight, seems to be an altogether different proposition/challenge.)

ROSALINE, is a new Australian play by Joanna Erskine. Since 2007 Ms Erskine has ruminated on how she can give a voice to the woman scorned in one of the world's great romantic tragedies. To tell Rosaline's story. For, Ms Erskine refused 'to believe that Rosaline simply disappeared'. The play, ROSALINE is, of course, Ms Erskine's contemporary projection of a possible alternative drama for Rosaline (Aanisa Vylet), involving Romeo (Alex Beauman), his friend Peter (Jeremy Campese) and a Friar (David Lynch).

The Rosaline, of this play, is furiously possessed - obsessed - in lust with her Romeo. She will have him and, she determines, y no-one else shall. This belief passion leads her to actions and extreme behaviours. Ms Erskine's play tells a story that is as predictable in its tragic trajectory as the original Shakespeare does when trumpeting his story in the opening sonnet-Prologue of ROMEO AND JULIET.

Directed, by Sophie Kelly, on a dour Set design (Set and Costume Design by Lucy McCullough) - a raised grey rectangle, encasing a pit, where most of the action takes place - the actors, in a collection of multiple scenes tell the story of Rosaline and her pursuit of her Romeo.

The difficulty, for me, was the acting style from all the actors of an almost unabated earnestness. The actors seemed to sit above the text and played the 'idea' of the characters and the dramaturgical intention of the narrative. There was, for me, an artificiality of sound and gesture, not, observerdly, sprung from any organic truths of personalised experience. I had an impression of actors with a clear romance with the missionary zeal of the play and Ms Erskine's 12 year yearning. Truth, evidence of a real lived experience (personalisation), owned vocal characterisations, were strangely rare in the 75 minute production of the play. The actors seemed to be talking at each other not to each other, no-one seemed to be affected by what they heard or saw - they were performing in a bubble. I could not believe the plight of anyone in the play. I was guided to the idea of the play rather than to experience any authentic 'happening' in the tragedy of this Rosaline.

Ms Vylet, who plays Rosaline, I remember essaying a passion not much different in energy and 'nakedness' in a production of THE GIRL THE WOMAN out at Riverside, Parramatta last year - her characters, in both instances, driven by a sexual need that, too, led to disaster. This possession of Rosaline, by Ms Vylet, did seem extremely familiar. (Oddly, I felt, there is no other female character in the play - one wondered if Juliet ought to have appeared, even as Rosaline does in ROMEO AND JULIET, a silent presence?)

In the time of my uninvolvement during the performance "Does it always need to be the case - that tragedy is the conclusion to a woman who pursues her free life choices? I have just finished Elizabeth Gilbert's novel, CITY OF GIRLS (2019), whose intention, partly, was/is to tell the story of a young nineteen year old woman - Vivian Morris - finding herself in the world of New York in the 1940's and decades after. A story of empowerment that includes wild choice that leads to consequences that are both near tragic but also, satisfyingly, concludes as a celebration of her freedom of choice in her complicated life.

ROSALINE, is the fruition of a 'passion' of writer, Joanna Erskine. Last year I was truly moved by Ms Erskine's play AIR and could recommend it unreservedly. This production of this new play I am less enthusiastic about. It plays at the Kings Cross Theatre until the 26th October.

That play has a Rosalind - one of the great Shakespearen creations. His other Rosaline is one of the 'teases' to the gang of men led by Berowne in the comedy, LOVE LABOUR'S LOST.
Posted by Editor at 7:50 PM