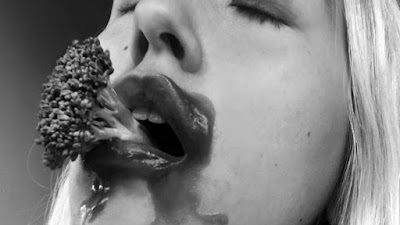 Writer, Anchuli Felicia King, and Director, Bonita de Wit, two young Australians, both found themselves studying in the Performance Arts Program at Columbia University in New York (not that they hadn't tried to find a place in Australian schools to do just that - their resourcefulness in finding the alternative way to training seems to have forged some strong 'gifts', despite, I imagine, the great expense). Their respective American friends at school made sure they became acquainted and diffidently, at first, i've been told, they did. Great! One result is SLAUGHTERHOUSE, a new play by Ms King which is being Directed by Ms de Wit, in the Downstairs Theatre at Belvoir as part of the 25A Program. The 25A Program is an opportunity for five young collectives of artists to emerge in a Production presentation supported by the Main House that is the Belvoir Company.

SLAUGHTERHOUSE, is a play about an 'ethical eating start-up' encouraging the world to be aware of the source of their food with an abattoir being at a frightening centre (having, the night before, been shocked by the 7.30 Report exposure of the latest racing scandal and the maltreatment of thoroughbred horses, it was an unpleasant and piquant confrontation) What could, therefore, be more 'trendy' and 'honourable'? But in this instance, as in my real TV life, something seriously has gone wrong with the experience of the organisation's aspirations.

Five actors present five independent monologues telling the unravelling 'event' that has undone them, from their individual point of view. We sit in a growing wonder as each character connects directly to us, having us develop identification - allegiance - or not, and having to decide which one is speaking the truth and which ones are pandering a verbal concoction of face-saving self interest. Who ever you lay loyalty too makes little difference to your experience in Downstairs at Belvoir, for you will have an inevitable reflexive comic response and a startling mental and visual stimulation of some rare quality.

First Bianca - the Social Media manager - gives us her horrified memory and we are introduced by Brooke Rayner to the spizz of a scintillating comic writer, Ms King. It is a dazzling comic opportunity and in the performance by Ms Rayner of this completely self-obsessed 'youngster' with hesitant twitches and rude habits of eating, dressed in orange clothing, we are supremely mesmerised to her spot-on hilarious creation. We subsequently meet the 'sexual-dick' of the collective who believes he is the answer to any woman's dreams inhabited frighteningly by Adam Marks. We meet Sasha, played by Stephanie Somerville, the bosses' Personal Assistant, in all her weaning ego, who gives stage space to drug enhanced DJ, essayed by Tom Matthews, with all of his delusions that gradually, subtly, wins some surprise of empathy from one - weird. At the top of this start-up's pole is Hannah a self-centred CEO who takes full advantage of her sexual energies to enjoy what she may gain from the 'greenie' and guilt laden conscience of the 'clients' that they have inveigled to join them in support. Romy Bartz has all the pseudo-modest sinuation of body and innuendo to provoke many a wet dream as she tells Hannah's version of what has happened.A performance worth relishing.

All of us have been manipulated into an exhaustive state that was in its 75 minute drive, glued together by chaotic crashes of Sound that blasts the aural senses accompanied by doubling and tripling visuals with video - live and pre-recorded - that keeps one from resting our attentions (Ms King not only has written SLAUGHTERHOUSE bu, also, has created the Sound and Video input!)

We are in the world of a stimulating contemporary comedy of modern cruelty and savage critique, with a Design by Brendan de la Hay that is startlingly white, doubling as screen for the video action, with the detritus of modern high tech gadgets dumped on the periphery edges in discarded abandonment. Everything, especially conscience, seems to be easily dispensable in this millennial world. The Lighting by Phoebe Pilcher supports the concept of the look of the show, brilliantly. The primary colours of the costumes, also by Mr de la Hay, spring out at us to create an ocular discomfort that the masks (PIG-man!) and other properties may have you recall your youth or the last queer party you attended - you know BAD DOG or CLUB KOOKY?!

This work by Ms King and the sure hand of the Director, Bonita de Wit, ensures no matter what generation you belong to an hilarious and witty night is on offer - a surprise of real quality in all areas that is worth seeing. Ms de Wit recently debuted in Sydney, on her return from New York, at the Hayes with her production of the new Australian musical RAZORHURST (it was not so sure an experience as this work is), while Ms King has had her play, GOLDEN SHIELD, just close at the Melbourne Theatre Company, and she awaits the opening of a co-production by the Sydney Theatre Company and The National Theatre of Parramatta, WHITE PEARL, out at Riverside Theatre, Parramatta. Two artists worth noting, I reckon.