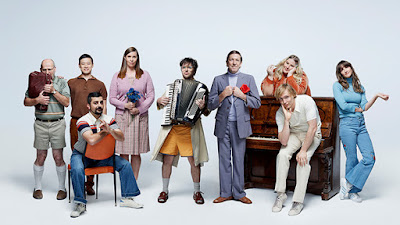 Lewis (Sean Keenan) is a character creation of Louis Nowra that appears in three of his plays, SUMMER OF THE ALIENS (1992), COSI (1992) and THIS MUCH IS TRUE (2017). In COSI, Lewis takes on a job directing some patients of a local mental hospital in a 'therapy' production of Mozart's COSI FAN TUTTI. This is not Lewis' choice but one foisted on him by the thespian leader of the hospital patients, Roy (Robert Menzies), and his enthusiasm will not be brooked. The play charts the development of the rehearsals and first performance, hilarious in its ups-and-downs, as it negotiates the temperaments and obsessions of these 'artists', all engaged by many different motives to play, whilst isolated from the tempestuous real-world drama of the 1970's, except for occasional poignant intrusions, of the social upheaval of socialism in the guise of 'free-love' and anti-Vietnam protest - a time of youthful 'revolution'.

There is a theatrical history where drama set in a Hospital for the mentally distressed is revealed: famously, for me in Peter Weiss' THE PERSECUTION AND ASSASSINATION OF JEAN-PAUL MARAT AS PERFORMED BY THE INMATES OF THE ASYLUM OF CHARENTON UNDER THE DIRECTION OF MONSIEUR DE SADE - MARAT/SADE (1963/65), the adaptation of Ken Kelsey's novel of ONE FLEW OVER THE CUCKOO'S NEST (1962) into a play by Dale Wasserman (1963) - later become a famously lauded film in 1973.

With those plays there are as well the many, many films dealing with mental illness, going in my experience, way back to an Olivia De Havilland vehicle called THE SNAKE PIT (1948) - I was a shocked, terrified adolescent watching at home on TV - or, just as disturbingly a Ray Milland vehicle called LOST WEEKEND (1945) - an alcoholism centred eruption of mental illness entering my terrified consciousness, and not to forget the shock and fearful awe of mad Mrs Rochester in the attic in the 1944 Jane Eyre. And more recently, cinematic experiences such as THE SILENCE OF THE LAMBS (1991), GIRL INTERRUPTED (1993), SILVER LINING'S PLAYBOOK (2012), SPLIT (2016), or the present sensation JOKER (2019). I have never felt comfortable about viewing into this world. Horror or comedy has often been the storytelling mode, adopted by the creators. For me, the 'horror' of it is stressful; the comedy of it awkward.

In COSI, Mr Nowra, uses comedy as the principal tool to tell this partly autobiographical story with, in this production, a leaning into seeing the exercise of the play as a vivid intersection between theatre and therapy - art therapy - supported and 'pointed' by a program interview with drama therapist, Dr Kristen Myer.

I have seen many productions of this play, including the premiere at Belvoir Theatre in 1992, and, really, have resisted its effect, essentially being extremely uncomfortable watching the antics of the patients being treated with such comic hilarity. This is a joint production by the Sydney theatre Company (STC) and the Melbourne Theatre Company (MTC) and it is oddly astonishing to realise that this is the first time the STC have put the play on - nearly 27 years have passed.

It is an elaborate production, Directed by Sarah Goodes (my personal favourite younger Director), Designed by veteran, Dale Ferguson. The set is a gloomy fire-blackened box that is pierced from the side with vivid slashes of outside light through the doors of entrance and exit (Lighting by Niklas Pajanti) until it is converted into a white floor and walls stage for the actual rendition of Mozart's COSI, with the character's transformed from the hum drum realistic clothing of everyday life to the riotous hodge-podge colours of the 'found' costuming organised by the cast themselves for the fantasy of the opera (Costumes by Jonathan Oxlade).

This company of actors are encouraged to a robust explosion, in turns, of pathos and hysteria, where, unfortunately, the vocal work is often pitched into higher registers that sometimes provide a strangulation of sound instead of a clarity of vocal narrative storytelling - the robust emotional life overriding the information in the lines and creating an obstacle with all that happens on the stage.

Especially interesting, however, is the work by Rahel Romahn, as the pyro-maniac, Doug - he, again, strikes one as an entirely inventive and deeply invested actor in all the choices he creates - he maintains a growing consistency of excellence. So does Glenn Hazeldine playing Henry revealing a wounded man with a deeply owned dignity and integrity - truly moving in his big Act One moments. Robert Menzies is assured as Roy, as is Esther Hannaford in the double playing duty of patient Julie and girlfriend Lucy. Television actor, Sean Keenan gives a performance of some stabilising effect to make Lewis the calm at the centre of the 'storm' guiding his 'actors' steadily to fruition of the discovery of the joy of theatre. While the exuberant energy and huge presence of Bessie Holland as Cherry, is just held together, just, preventing a spin into performance mayhem.

Ms Goodes' concept and control is admirable and well worth seeing, even if the play itself is, for me, an uncomfortable experience. I have decided never o watch this play again. There is a film, as well, 1996, with an all Australian star cast.
Posted by Editor at 11:03 PM