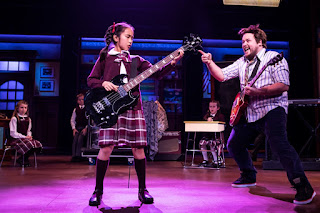 GWB ENTERTAINMENT and S&CO in association with KHAM Inc by arrangement with Really Useful Group Limited present SCHOOL OF ROCK - The Musical, based on the Paramount Movie written by Mike White. Book by Julian Fellowes. Lyrics by Glenn Slater. Music by Andrew Lloyd Webber. At the Capitol Theatre, Sydney. 15th November, 2019 - February 2020.

SCHOOL OF ROCK - The Musical, is an Andrew Lloyd Webber musical based on the highly successful Paramount film (2003) Directed by Richard Linklater, that starred a hyper-charged Jack Black, with Joan Cusack, in support.

Bursting on to The Capitol Theatre stage is a phenomenal performer, Brent Hill, who with impressive energy and immaculate theatrical instincts and a highly refined comic and musical technique, drives this show with a manic, magical force. His performance, as Dewey Finn, is astonishing to behold.

But this version of the original film has expanded its attention to the children in the 5th grade classroom at the prestigious Horace Green School and they have as central a place in the scheme of the musical as Dewey. There are three teams of 12 children who alternate through the performances. On the Opening Night they created a force of irresistible attraction, not only for their sparkling characterisations but for their awe-inspiring talents: singers (Outstanding Sabina Felias as Tomika and her rendition of AMAZING GRACE), dancers and some, instrument players, and gave a perfect balance to their leading man, but also making room for the other leading member of the creative triangle, Rosalie Mullins, inhabited by Amy Lehpalmer. Musically she covers an aria from Mozart's THE MAGIC FLUTE, Queen of the Night, to a throbbing rock number (Where Did The Rock Go?) with a Stevie Nix homage! and a metamorphic growth from a disciplined stuffy headmistress to a released free spirit. (Ms Lehpalmer is fond in my memories for her Maria in THE SOUND OF MUSIC, and Christine Colgate in DIRTY ROTTEN SCOUNDRELS, a few years ago).

The musical has also expanded the persona of the parents of the children and in this production are ably led by John O'Hara as Ned and Nadia Komacz as Patty. The artistic demarcation of character types is economic and easily recognisable in their cliche demands for this art form. Spot-on and hilarious in their pathos and angst!

All in all SCHOOL OF ROCK was a joyfully brilliant night in the musical theatre at the gorgeous Capitol Theatre. (Who would have suspected that I would surrender so easily?) It should appeal to all members/generations of the family and it is especially fortuitous that you can see it in Sydney over the Summer holiday period. What a great gift - outing - for all.

Your family may be converted to the ARTS in a big way. Take them along.