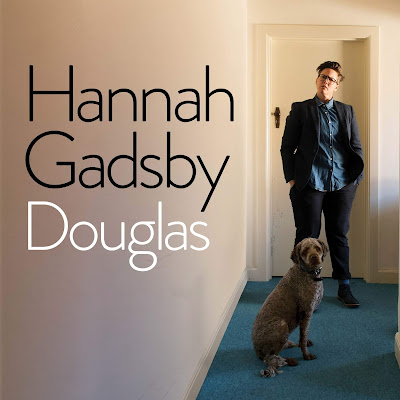 A large screen at the back of the Concert Hall stage is covered with a projected photograph of Ms Gadsby and her dog Douglas (a large poodle). It is Douglas that has inspired this new show, tells Ms Gadsby - well, new to Sydney for it has already had a showing in Adelaide in March, then Melbourne and has toured to some cities in the USA. In 2018 Ms Gadsby became an internet star with the release of a performance of NANETTE on NETFLIX, which has received an international critic rating of 100% and has been acclaimed as 'ground breaking'.

Coming through one of the huge side doors on the side wall of the Concert Hall Ms Gadsby in her dressing of trousers and jacket with her hallmark black rimmed glasses strode confidently but politely middle stage to the roaring support of the two and a half thousand audience. Acknowledging her reception with gentle waves she begins by referencing the likelihood that most of us are here as follow-up to NANETTE, and rhetorically wonders what the expectation might be from us of this new show DOUGLAS. She tells us that Douglas was inspired by the response to the last show, in which some social media participators had described NANETTE as 'less comedy and more a lecture'. She then proceeded to give us a "chapter' breakdown of what were the order and subjects to be covered, this night, finishing with the announcement of a concluding power point LECTURE and if we felt disinclined with any of the plan she would understand if we left.

Ms Gadsby is a standup comedian, writer, actor, political and gender activist, art historian and an astonishing observer of the social interactions of humanity with all of its historic habit of repeating itself. In my observation the great comedians have the 'heavy' capacity to see the world about themselves with piercing eyes that then translates to devestaing comedy. Devastating because of the ,often, naked force of their observational truth delivered in a voice that summons courage of the highest order to publicly articulate. The great comedians release for us the daily anxieties of being alive and of our attempts to function with some sense of hope to find a way to optimistically move forward as a species. These 'visionaries' are often the contemporary and dreaded "Cassandra" that speak the unspeakable truth and are generally disbelieved. To be a seer, the seer, in the tribal structure is not, necessarily, a comfortable thing to be.

Over the next 90 minutes or so Ms Gadsby took us across many hot press button issues in our sociological and philosophical real-time landscape that were both scorching to hear but charged, fortunately, with the weighty shock of the usually 'unspoken' to beckon gusts of comic laughter from us that crashed noisily about this Concert Hall with a palpable gratifying relief. The relief of a communal identification of what was been given - spoken - accompanied by a joy to have Ms Gadsby as our spoke person/verbal witness, for her intelligence is obviously peerless and her courage superb. (I mused a scary dinner guest). Even if you may not agree with her subject targeting or, perhaps, the vernacular argot in which she couches her propositions, you will be impressed.

90 minutes or more, is a generous offer, in a solo performance, and the alertness she has to the energy response of her audience is utterly, utterly brilliant. Her concentration and control is astonishing. The time spent in the auditorium zipped by. The performance never dragged. In fact I felt less tired at 10 o'clock that evening than I had when I entered at 8. I was inspired and felt smart. I felt like the mere man Bernard, shown to us during her power point lecture on medieval religious panting, who was with the spurting lactation of milk from the Virgin's breast transformed to become a higher being by becoming a saint: Saint Bernard. I entered the Concert Hall as Kevin and after being euphemistically 'lactated' upon with showers of witty words, felt I was leaving that hall as Saint Kevin and a possible enlightened proseltysing of the gospels of Hannah Gadsby!

Part of the preparation for the performances was a stipulation that one's iPhone was to be turned off and then placed in a supplied package, that was then locked. At the end of the performance the package would be unlocked. 'Inconvenient', I rankled. But, in practice, not at all. So, no-one was able to illegally film the work.

DOUGLAS will be released in 2020 on NETFLIX, so if you have missed this brilliant night in the theatre you will be able to catch it then.

Do not miss it.