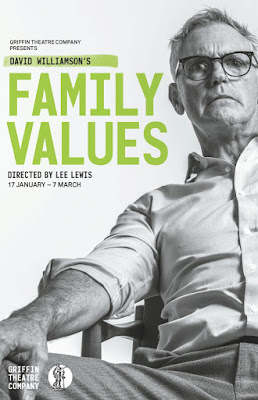 FAMILY VALUES, David Williamson tells us it is his second-last play. CRUNCH TIME, soon to premiere at the Ensemble Theatre will be his last. After 50 years of writing for the theatre, its time to put up the pen, type writer, computer keyboard, or what ever. The Stables Theatre was where we saw THE REMOVALISTS way back in 1971, so it is fitting that the Stables Theatre, then the Nimrod Theatre, hosts this play.

On the eve of Roger's 70th Birthday, dutiful wife, Sue, has organised a family get together with balloons and funny hats to mark the occasion and celebrate - an infantilisation of a high court judge. Is there meaning there? one wonders. A conservative dining room table and six chairs around it, centre stage, becomes decorated, gradually, with the bringing on of a cake crowning the whole event. A set of stairs (that lead nowhere - they, too, maybe a metaphoric symbol?) dominates the space. Set and Costume Design by Sophie Fletcher.

In this room we meet a privileged conservative North Shore family. And each of the characters have been given extreme 'political' positions to 'stand-in', demarcating, very obviously, their profile differences. A brouhaha is certainly to erupt when they gather in close quarters with each other, for sure.

Mr Williamson gives us an ultra conservative law maker and rigorous sustainer of the letter-of-the-law Judge Roger (Andrew McFarlane); a domestically obedient but quietly opinionated political spouse (when roused) - domestic duty first but with a 'book-club' bourgeois curiosity ready to take 'arms' for a just cause, lovely Sue (Belinda Giblin); daughter one, a radical political activist and feminist with a defy me, if-you-dare set of beliefs, Lisa (Danielle King) ; daughter two, an emotionally frail (maybe not be all there?) timid lesbian administrator of Border Force legalities, Emily (Ella Prince); a family interloper, Emily's not liked partner, a forceful, dominating lesbian, with a missionary zeal to enforce Border Force legalities who embraces her military role-power with ruthless relish, Noeline (Bishanyia Vincent); mysterious stranger, a runaway illegal refugee fleeing Border Force control - who is a deluded innocent believing that goodness will triumph in the end, Saba (Sabryna Walters); and only son, a damaged middle boy-child who has found himself by adopting a radical born-again Christian ideology (Pentecostal Hillsong?), that has given him an identity and responsibility to proselytise to all - he feels empowered, at last, Michael (Jamie Oxenbould).

In the family interactions, Mr Williamson dials up the language of each of these diametrically opposed beings to extreme and simplistic blatant temperatures of venom and conviction that releases a gale force verbal farce. Add inflamed sibling rivalries that have not been resolved despite their growth into physical adulthood: they are burdened with arrested emotional development. An indulgent helicopter parent and partner, who has for all of her life been visibly as neutral as possible with all of the demands and stances of her very needy family. A set of political-religious zealots, each with the energy of the righteous believer that they are ABSOLUTELY right. And, lastly, the intelligent innocent caught in a desperate trap of circumstances.

With the sureness of a vintage and experienced writer Mr Williamson constructs the dramaturgical logics of the observational comedy as farce and lets it unfurl.

Lee Lewis, Directing her last play for the Griffin before her shift to Queensland, attempts to manage the 'rage' that Mr Williamson unleashes in this work, to guide her actors into a mode of acting that has been out of fashion in Sydney for some time - except in the sketch comedy that dominates much of commercial television - FARCE. You may recognise it when you recall the FAWLTY TOWERS television classic. We rarely see it on the Australian stage and not many of our actors have the practised skills available as part of their tool kit. It requires a central truth that can be exaggerated to spin into controlled realms of ridiculousness - it demands precise technique and a cool observational in-the-moment rapport with all that is going-on around you.

This company of actors have varying success in creating and/or sustaining the Marx Brothers mayhem that this form of theatre requires. We have the secure central reality of a 'Roger' character and a phlegmatic Sue to gradually become the anchors of reference for the other comic specimens that lift off 'mother earth' and spin into the farcical outer planetary system of say the far away Uranus or Mercury - extreme realities. It means that all must 'fight' - compete - for their character's point of view with a restless tenacity and fearless attack. (Like playing winning doubles tennis on speed).The Griffin actors all exhibit a passion that unfortunately gets out of their control so that shouting becomes the most favoured mannered choice for these actors to claim their characters and argue their point-of-view.

A perfect example of this style of performance we in Sydney saw when the National Theatre brought their magnificent farce ONE MAN TWO GUVNORS to the Roslyn Packer, a few years ago. And if you are really alert you would have seen The Old Vic theatre company, led by the brilliant Andrew Scott, give a stunningly funny and exhausting farcical performance of a re-conceived version of Noel Coward's PRESENT LAUGHTER. (Catch it if you can - it still has some limited screenings around the Art House Cinemas in Sydney).

On the first Opening night (Wednesday) there was still an unsure investigation of the required style that Mr Williamson had set these actors. The performance was very precariously held together. None of them had really found a sureness of confidence in what they were doing. At one end of the offerings from this company one had the bizarre intricacies of choice that were been made by Ella Prince as psychically wounded Emily, providing puzzles of acceptance that drove one to believe that her character was either a deranged nervous wreck in need of urgent therapy, or an actor just plainly out of her depth in finding the solution for her given task - it was most confusing. The acting style of the others having to present extreme theatrical positions, building on the 'offers' of the other actors, were mostly demonstrated with a lot of shouting and deliberate naturalistic cross-over argument and physical confusions. The focus of the play became opaque in the welter of out-of-control offers.

Now, the play's arguments are extremely familiar - cliche  simplifications - for most of this audience. There was a comfort in that the content of the play was pitched as a familiar mirror - the writing was pandering to the converted who responded with the confident knowing that this family and its values live next door and are not, definitely not, our family values. Thank god or, at least goodness, if you don't believe in him any longer.

The experience of the performance I saw was discombobulating - on the one hand it being familiar territory of contemporary argument and so mildly amusing, but on the other hand delivered with an unsure set of technical 'guesses' in offers from the acting company of a kind that were mostly visual and verbal obfuscations that prevented a clarity of connection to the 'humanity' of these people and their point-of-views. It looked dangerously out of control. However, Ms Walters, in her  speech - plea - for the position of the refugee, Saba, was plainly moving and brought a calm centre to the events -creating the eye of the storm - for the play to, momentarily, have space for comprehension - a wonderfully motivated piece of work from this actor. Just why we don't know of her on our stages is a worry, considering the quality of her judgement in the mayhem of this performance and play.

The audience, I was with seemed to appreciate the play in action but in discussion afterwards were more than slightly bewildered of what they had just watched. Curious, indeed. See what you think. Maybe the performances have gradually found their way with the information that the audience responses may have semaphored to them as they gave one performance after another. Comedy is so dependent on the give and take, the cause and effect, the exchange of creative energy between the actors and the audience that the production might have been slightly undercooked on the Wednesday night but now has gradually found its way with a more stylistic confidence to ensure the black, black satiric observations of the typical Australian bourgeois family entrenched with a set of 'terrifying' values, that has made Mr Williamson so angry, that in his penultimate 'shot' of speaking as our contemporary storyteller felt the need to deliver the extreme obviousness of bitter caricature to hammer his point-of-view as a farce - a literary mode that he has never really engaged in before in his dramatic writing history.

It will be interesting to hear what his ultimate play CRUNCH TIME, at the Ensemble Theatre, has to say in his writing farewell. And in what dramaturgical mode he shapes - proposes it. Interesting.
Posted by Kevin Jackson at 10:58 PM