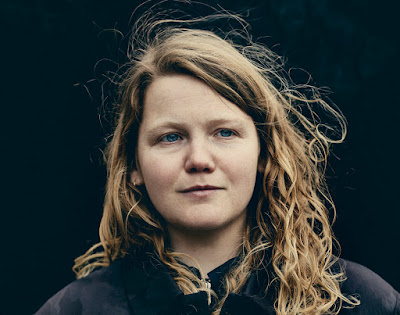 Kate Tempest is a British writer, activist, performance poet. A fierce observer and commentator of our contemporary times who has delivered four albums of her work, the latest: THE BOOK OF TRAPS AND LESSONS (2019) is the principle content of this concert. She, looking clear-eyed at her nation that is 'living in the mouth of breaking down'. This isn't a gig its a reckoning. "We're dead all of me knows it", Ms Tempest opining the behaviour of the people about her 'trapped' with the instruments of social media and convention suggests that we 'look for the warmth in each other instead'.

Dressed in street clothes in shadings of black with her hair tied back and no make-up on a bare stage with a large circular disc hanging in the background sometimes wreathed in haze and lit theatrically with flame orange/yellow/red lighting, occasionally standing in a spot of searing white light, with a one woman electronic back-up sound punching a support 'noise', though, in contrast to past work, is significantly stripped back, to permit a clarity for the spoken words. Ms Tempest progressively transforms from a shy, tentative young woman into a poet, into a force, emanating a dark vision to become, in relative scale, a mystic-type seer, a figure of Prophet proportions delivering a message that is considerably personal and yet, after weathering a withering critical take of the world stuffed with the toxic expressions of wealth and power, that is horrific in its pessimism, she guides us, ultimately, into a place of optimism: "Look for the warmth in each other instead, for there is something in this tenderness that makes me to want to live."

The experience of this 90 minute concert that includes glimpses from some of her earlier work: LET THEM EAT CHAOS (2016), THE BRICKS THAT BUILT THE HOUSES (2017), is one of inspirational transformation. Despite the physical endurance of standing for the length of the night one leaves the theatre in a lightened state, though dragged through a marathon of confrontation, and one feels happy, yes, optimistic that the goodness of the human spirit will prevail. Sensational.

Prior to Kate Tempest's entrance Omar Musa the Australian slam poet, writer of novels and poetry collections had warmed us up, trained our ears to the sound 'frequency' to facilitate the ability to hear the complicated stripped language of the poetic form - his and especially Ms Tempest's. Omar Musa is a favourite of mine - this is a third meeting with him - and I understood and admired the bravery of some of his content (not all of it) and yet after the fearless nakedness of Kate Tempest's preoccupations which she shared with us in a kind of 'fuck-you-like-it-or not' persona, his contributions were, by contrast, tame - Australian tame, having a kind of self-deprecating technique - manner - encased in his natural charisma that, I think now, is a performer's sleight of hand, a sly sexual seduction employed as a tool of his performance mode to kind of 'apologise' for his temerity to say those challenging things.

This concert/recital a special night.


P.S. I had also seen, twice, the Broadcast of Philip Glass' opera, AKHNATEN, from the New York Metropolitan Opera. The second time on that same Thursday that I attended Kate Tempest. I was in a heightened state of a spiritual transcendence, the opera experience so mesmerically wonderful, and so my senses were perhaps particularly open to the Tempest offer.

The opera was composed in 1984 and was Directed by Phelim McDermott - an English artist - who had a few years ago also presented SATYAGRAHA, another Glass Opera. This production originated at the National Opera in London and had played in Los Angeles, as well. Designed by Tom Pye, Conducted by Karen Kamensek - her Met debut and only the fifth woman to conduct there - Choreography by Sean Gandini (featuring juggling). AKHNATEN was sung by countertenor Anthony Roth Constanzo, The Narrator, Bass Zachary James, Nefertiti by J'Nai Bridges with Disella Larusdottir singing Queen Tye.

If you missed these screenings try to force further showings by request.

The production is remarkable and rare in its power and beauty. It could change your life.
Posted by Kevin Jackson at 6:22 PM

Hi Kevin,
I very much had the same experience when I saw Akhnaten!
Still processing the effect on me (including life-changing ones), and enjoying listening to it over, and over. regards, Paul