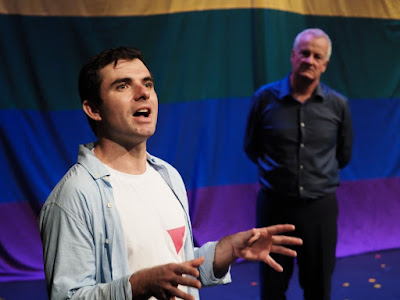 THE CAMPAIGN, is a new Australian play from Campion Decent, commissioned by the Tasmanian Theatre Company, telling the history of the 9-year campaign for the human rights of the Gay and Lesbian community of Tasmania.

THE CAMPAIGN is presented largely in a verbatim mode and based on interviews and research through the Parliament of Tasmania, the State Library of Tasmania, the Tasmanian Museum and Art Gallery. It is a meticulous 90-minute work loaded with a plethora of material. Every twist, obstacle and turn in the pursuit for justice in the State of Tasmania is delivered in a classic Theatre in Education (T.I.E.) theatre style.

Five actors: Matthew Lee, Simon Croker, Madeline MacRae, Jane Phegan and Tim McGarry, impersonate some 32 characters. They do so with great skill and clarity. Earnest, zealous, emotionally (with occasional coy sentimentally) imbued with a marvellous sense of ensemble. Simon Croker, particularly, engaged us with his simple ownership of all he was responsible for, as was Jane Phegan, in a more matter of fact way.

THE CAMPAIGN impresses as a very confident attack of the material, drilled by Director, Kim Hardwick, in a simple Design of Setting and Lighting by Martin Kinnane, backed by Composer and Sound Designer, Patrick Howard.

One leaves the theatre teeming with information, a history. And it is an important one to record. This production is part of the Sydney Mardi Gras Festival of 2020 and is of significance for that community. The problem is that there is no drama here. It is a long, blow-by-blow chronological account of the events and characters involved.

It became, frankly, difficult to stick it out, to participate with it, attentively, for 90 minutes. Restlessness crept up. It became a bit of a bore.

A play? A lecture accounting a political history? More the latter than the former.
Posted by Kevin Jackson at 9:26 PM