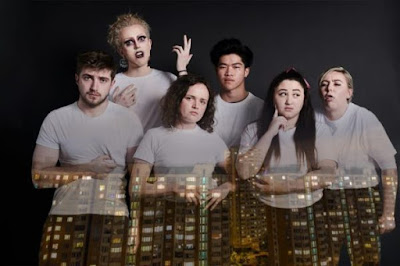 5 emerging artists were chosen from a large set of applications. This presentation was the fruition of that creative opportunity.

There were two foyer works.

1. AMPLIFIER by Tall Jan, is a video work by Brendan Donnellan aka Tall Jan. It consists of a series of edited self-interviews concerning a sexual transition. The mentor was Bhenji Ra. It is, frankly, a work that is not well executed either technically or content wise. I was able to view it 3 or 4 times in the progress of the night I attended and did not truly learn much of the journey that Tall Jan has gone through. Neither of the emotional journey nor the physical journey and its repercussions. The most successful element was the exotic makeup solution of the persona. Not the costuming, the choreography (?), cinematography or its editing. The images and sound were not of a competent standard as to justify its presentation. It has no rigour at all. No craft. I'm very curious about this social phenomenon of gender fluidity, so this presentation was disappointing.

2. PLASTIC SLIPPERS by Bill Chau, is a free-standing installation of found objects supposedly exploring " the nuanced beauty of Chinese-Australian culture" to show "what it means to grow up in an immigrant family." It was mentored by David Capra, and was a collaboration with Emma Silwanis, Jessica Kim, Siann Boustead, Nicole Pingon. The work is there to be seen. Its significance is relatively opaque to the observer.

In the theatre space at 107 there were 3 performance works.

1. STALLS, by Lily Hemsby and Lana Filies. It is a self-devised work that begins with discussion of farts, poo, and haemorrhoids - it goes on to talk of other manifestations of body evacuations, with  song and dance interludes. You get the idea. It is a short play (sketch) that is intended to be "a relieving experience, creating an un-constipated kaleidoscopic view of the experiences women face in the loo." coming from their realisation that are "all poo but they feel a bit weird about it." Imagined, I guess STALLS was going to be 'shocking', daring to talk openly about bodily functions, the content is juvenile and pallid in its effect, not helped by artists with undertrained skills of voice and body. It feels as if it were a high school joke that has had 'legs'. It has no 'legs' in this theatre but to take us to despair at the use of the 6 months of  creative opportunity. Mentored by Lally Katz, both the originating artists were assisted in devising and performance by Olivia Harris and Cara Severino. It was almost 30 minutes of total embarrassment. Tiresome. As they say: the wheel has been invented. It has all been said before and by real artists.But, of course you had researched your predecessors hadn't you? Probably, NOT.

2. LITTLE JOKES IN TIMES OF WAR, by Charlotte Salusinszky. In a solo performance Charlotte Salusinszky tells us of her heritage, the English side of her family but, especially, passionately, of her Hungarian father and his mother, her grandmother and some her refugee peers. Particularly, her grandmother's story, began to stir her to attention. Charlotte learns the language, she goes to folk dance classes and steeps herself in this strange culture of food, music and, unexpectedly, of Hungry's history.

It is told by Charlotte with an intense investigation and enactment by an artist/storyteller of some note/promise. This is the blessing of her reaction, repercussion, to the events she discovered. It is written, performed and Directed by Charlotte herself. It has a sophisticated researched Sound and AV Design component by Rowan Yeomans, projected onto the wall behind her, found in the National Film and Sound Archive of Australia's Film Australia Collection, illustrating and backing up visually the background to the work's verbal content.

Ms Salusinszky has a gripping personality that captures one's attention without delay and her skills: voice, body (dance skills), emotional attachment and intellectual acumen is outstanding. It is a complete seduction. Her wry sense of humour are tool of welcome and delight. The content is riveting and confronting. It has no sentimentality. It is rigorous and fearless - wonderfully edited. It is raw and filled with great love and steadfast admiration. Pride. A glorious pride. This work deserves exposure again and again. I wish to observe it again. I was tremendously moved. Very excited.

The work was Mentored by Deb Pollard. I know of Ms Pollard's own work and am usually, similarly impressed. It seemed to me there was an intense and fruitful artistic collaboration,  between  the two, one of great simpatico, with the time usage of the 6 month opportunity apparently deeply engaged with.

LITTLE JOKES IN TIMES OF WAR, is a special project of great integrity and skill. Congratulations.

3. STRIPPED, by Luke Standish. This work is part documentary, based on his own experiences, who while living in Dubbo, began a career as a male stripper in his local area at the invitation of a friend. Devising a text to tell of his journey and dawning realisations of his new 'profession' Mr Standish demonstrates some of the different techniques and props/costumes (and lack of them) which he utilises to persuade and win his audience to places of ecstasy.

The work felt to be still in an early stage of development. It had a simple structure with an audience physical interaction but the marrying of the physical and vocal, even when it was a pre-recorded voice, was not yet confidently sure. Certainly the physical effort was not effortless and one did wish he had prepared his body tone to a more startling effect. To do that, of course, requires a regime of intense commitment and rigour, exercise and diet - it is time consuming. And however I may generally feel about the "body builder' as an aesthetic to admire, I am so aware of the time and dedicated effort that is entailed in sculpting their flesh to achieve such a goal, I give respect. It is a difficult thing to do.  Just as it is to achieve a theatrical impact. It needs rigour and hard work, daily application.

STRIPPED is ambitious but is naive in skills. This work was written, directed and performed by Luke Standish. His Sound design was by Duncan Standish. His mentor collaborating with him is David Williams.

One recalled the MAGIC MIKE film (2012 ) starring Channing Tatum and Matthew McConaughey, the story of the lives of a troupe of trippers in Tampa, Florida - one wonders whether this was a useful inspiration for this team with this interesting exploration of male country town burlesque.

STRIPPED, as it is at present is an undercooked work - but is worth pursuing.

5 projects. 6 months development. Program director for Shopfront, Natalie Rose has nurtured and curated the 2020 ARTSLAB. That one of the five, LITTLE JOKES IN TIMES OF WAR, by Charlotte Salusinszky, is an outstanding success is a wonderful statistic. A success rate of 20%. This project gives these emerging artists the space, time, supervision and material support to explore their passion. It allows for failure as an important part of the learning process. Whether the artists applied themselves vigorously over the 6 months to their creative opportunity only the individuals know. It will be interesting to see what the future may hold for these participants. One hopes the exposure and the critical response whether positive or negative will become part of the energising inspiration for their next work.

Resilience, persistence, luck and hard work will take you there. As one knows: Preparation is ALL.
Posted by Kevin Jackson at 3:53 PM