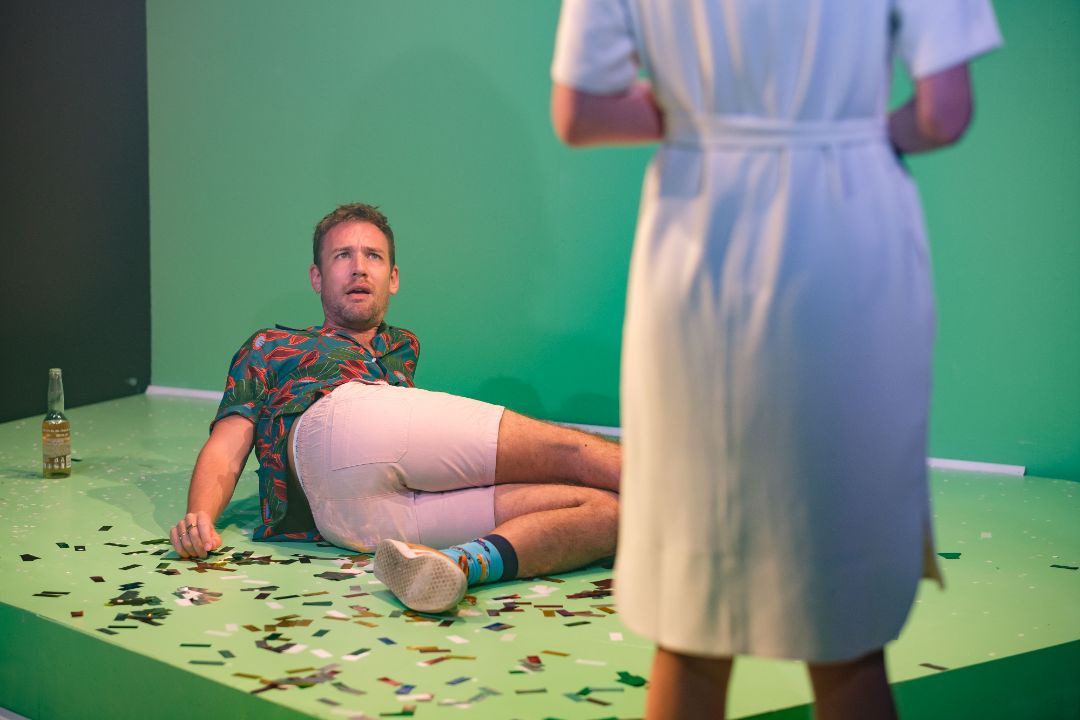 AUSTRALIAN OPEN is a new Australian play by Angus Cameron. It is a gay-themed play playing during the Sydney Gay and Lesbian Mardi Gras Festival. Humourously, the management of the Kings Cross Theatre has re-badged the building for the Festival season as the "Queen's Cross Hotel"!

Lucas (Patrick Jhanur) is a champion tennis player about to face Federer in the Australian Open final. He is an openly gay player in an open relationship with a vulnerable and conflicted partner, Felix (Tom Anson Mesker) - who is as nerdy and neurotic as his name sake is in Neil Simon's THE ODD COUPLE, I wondered if they were related. Lucas and Felix are certainly an odd couple, but this play is thematically, definitely, a comedy with a 21st century point-of-view.

Felix's mother, Belinda (Di Adams) is restless in her long standing marriage to Peter (Gerard Carroll) and inspired by the modern, contentious values, sexual and philosophic, of her son and his partner, decides to divest herself of the boring responsibilities of wife and mother to follow her own need for exploration and self-actualisation - in this case climbing Mount Everest. Reluctantly staid Peter follows her lead and hilariously embarks on an investigation into his sexuality, which Lucas, his son's partner is happy to be part of, facilitate even, after meeting accidentally in a gay dance bar. Add to the mixture a nerdy scientist sister, Annabelle (Miranda Daugherty), with a penchant to solve problems, both scientific and family orientated, who has returned from Geneva to attempt to put all things personal to rights.

Mr Cameron has written a very funny comedy with an appealing ability to write a type of screw-ball dialogue - rapid exchanges of logic that take on an escalating sense of the ridiculous. In this production Directed by Riley Spadaro, the actors are well drilled in the verbal acrobatics of the piece - the speedy timings are wonderfully played. That not all the characterisations have clear background stories to motivate the characters and justify what they do, is a failing of the production - the writing appears to be better than some of the acting.

Ms Adams is wonderfully cheeky in her character's journey as is Mr Carroll in his transformation from uptight dad to sexual adventurer. Mr Jhanur is relaxed and a seductive figure to hang this story on - at ease with the moral stances of his character and adept with the whimsical verve of the comedy style, whilst Mr Mesker, having the more complicated character, is sometimes right-on and sometimes right-off - mind you, Felix is not always an easy character to like as his arrested emotional development and sexual prevarication is a real frustration for all. It seems it is so for Mr Mesker, too, for he has not found a completely sound way to put the contradictions convincingly together - a problem for the production as he really is the major concern of the writer.

Ms Daughtry has intellectually discovered the writer's function of the sister/daughter, Annabelle, and simply delivers the 'type' without any true investment in creating a 3-dimensional human being. She has not transparently created any credible backstory to help us understand her character's behaviour. Her performance solution is stilted in exposing Annabelle as a robotic in a tightly held physical caricature, dressed in formal, uncreased style with a helmet-type hair dressing, utilising a shallow vocal sound both as the scientist in her early solo scientific wonderings and in her interactions with her family when she meets them with a surprise visit.

Whatever is the dramaturgical function of the scientific text in the early part of the play from the writer, it is not clear in the work of Ms Daughtry. Is it a metaphor or explanation of the behaviour of the others in the play (a la a Stoppard scientific observation), or not? Ms Daughtry has not the means to connect it for us and it all seems extraneous and obtuse - and in performance - arch. Her solutions are so out of kilter with her other actors stylistically that they intrude obviously as an obstacle, for the audience, to a belief in the comic world of the play. Annabelle is just not in the same play as the other characters.

The contribution of Tom Hussell as Hot Ball Boy is mostly that of furniture mover and seems to be an artificial addition to the action of the actual play - it is far too self-conscious in its effect.

The Set Design by Grace Deacon, makes clever choices considering the traverse stage she is working in, helped by the Lighting Design by Phoebe Pilcher, and is backed up with the location sound Composition and Design by Alex Turley.

Mr Cameron has written a play of some promise. Comedy and social/political comment is not an easy marriage to pull off. His ambition is not quite revealed with this production where the comic style has had more attention than the revelation of the dramaturgical arguments of the content. Just what is the writer saying?

Laughter is not always enough.
Posted by Kevin Jackson at 3:37 PM