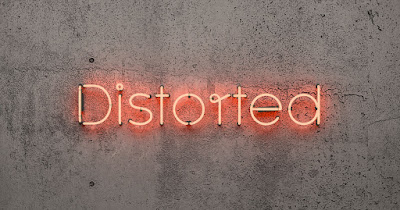 DISTORTED is the latest play from Australian writer, Xavier Coy, whose other plays BURIED and ARE YOU LISTENING NOW? I have seen, both at the OLD 505. Mr Coy's writing has always intrigued, provoked and excited me.

This work is 90 minutes long with no interval and charts ten characters in a journey-arc to depression. Mr Coy is exploring Mental Health.

Director Richard Hilliar with Mr Coy and his actors have 'workshopped' the original collection of independent people into a text to reveal definite characters with individual narratives, all existing in the same world but not at all connected to each other. Originally some 73 scenes, perhaps the time plan for this showing was pressured in its need to find dramatic shape and character such that the creative application to find expressive truths for character belief had to be rushed.

It is essentially a piece 'about people yearning to connect with one another' and yet finding that, ultimately, they are all alone, that they cannot ever really know anybody but themselves.

Kate Tempest, the slam-poet, presented her latest Album: THE BOOK OF TRAPS AND LESSONS, as a soloist with a musical soundtrack, in February at the Arts Factory Theatre in Marrickville - and her envisioned people, like the people in DISTORTED are, presently living in the mouth of a society that is breaking down. What can they do to survive? Ms Tempest gives us an inkling of hope. Mr Coy's people don't get that far, they arrive in a 'pit' of despair, of nihilism and the play stops - stops short of providing hope.

Mr Coy's play has its energy fed with an acute observation of our present zeitgeist. However, DISTORTED is probably 40 minutes too long, as its dramaturgical point is made quite clearly early, and unfortunately repeats that conceptual well-spring over and over again with a tedious insistence that allows all 10 of the people the opportunity to speak.

Mr Hilliar, the Director, has staged the play by shifting his company on and off the stage and around it relatively efficiently, but has not paid sufficient attention to the vocal demands of the Ensemble, especially in terms of tonal contrast, or for the ensemble to have a technical ear empathy for the choral effect of the text in this small space. (N.B. the shouty 'chorus' that speaks to Mr Coy's character and his struggle with his pet cat. There is little characterisation or presence in that 'chorus' who vocally broadcast sounds with no personalised, owned text - no word for word clarity or acted intention, whereas Mr Coy has a deep ownership of his pathetic man-child, both, vocally and with a clear inner monologue with an expressive face physicality.) Mr Hilliar indiscriminately allows the actors the choice to shout - and to shout far too often - and making 'noise' rather than communicated textual information. The Old 505 is a space that does amplify the sound incontestably - a boom-box.

Neither has the Director drawn fully developed characters from his actors who are mostly exhibiting two dimensional representations of type with no depth or complexity of the human condition and relying on emotional states and sentimentality to communicate. Really the buck does stop with the actor - it is the actor's responsibility to do that work in detail - it is simply the applied craft of the actor that one ought to expect. The best performance and the one that truly moves one is that created by the writer, Xavier Coy, who, as one would expect knows who his person really is, beyond just speaking the words. Michael Arvithis is next best.

The playwriting is better than this production, although the Set design, by Hamish Elliot is both beautiful and a satisfying support to the 'ribbon' of the decent to a state of instability. - it has great sophistication.

DISTORTED is a disappointment but has a writer of interest to encourage an audience.
Posted by Editor at 4:46 PM