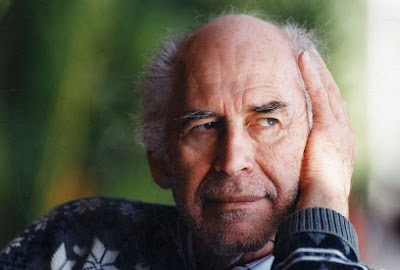 Ron Haddrick passed away on February 11th this year, 2020. A memorial service was held at NIDA on Sunday 1st March that included celebrants of this man's life: Daughter: Lyn, Son: Greg, Granddaughter: Milly. Peter Carroll was the Master of Ceremonies and invited John Bell, Aubrey Mellor, Drew Forsythe, and Kirrily Nolan to speak.

The surprise guest speaker, for some of us, was cricketer, Ian Chappell. Mr Chappell apologised for his presence but soon illuminated the raison d'etre for it. As a boy Ian Chappell used to watch Ron lead one of the local cricket teams in the Adelaide suburbs onto the field. He remembers watching Ron appear in the State representational team for South Australia as an opening batsman and he remembers, when he was a child, the dressing room 'joshes' and interplay among the players and the good nature that Ron exuded as a contributor to the spirit of the teams.

The cricket connection was easy for me to understand because my memory sees Ron through three lenses: his acting; his obsession with the annual International Piano Competition that often ran in tandem with us, they upstairs in the Concert Hall that was broadcast by the ABC live and we downstairs in the Drama Theatre, toiling through the dramatics, of say, THE CRUCIBLE, and his addiction to the Cricket seasons that he kept us informed about, wandering through the passage ways in our dressing room areas with his transistor radio plugged into one of his ears when he was not required on stage. Cricket played a big role in Mr Haddrick's life.

Ron had returned to Australia in the early '60's after a career in leading companies in Great Britain. He quickly established himself as a leading performer in Australia possessing a vocal instrument of much beauty and expressiveness and physical aptitudes that only a sportsman could have hewn. I met Ron when I was a young actor joining the Old Tote Theatre Company after my stint of training at NIDA, as we all prepared for the Opening of the Sydney Opera House with a three play repertoire: THE THREEPENNY OPERA, RICHARD II, and a new Australian play WHAT IF YOU DIED TOMORROW? by David Williamson with Ron Haddrick and Ruth Cracknell starring as the hapless parents (this pairing was a long one over the coming years, and he became known affectionately as "Sir Ron" and she as "Dame Ruth".)

Ron was the leading man of the company (us youngsters thought he was an "old man" - he was only 44!) and was a tremendous influencer on the atmosphere of the company by setting, through a thoroughly professional approach to all his work, abetted with a sensitive but discreet eye that was kept out for us youngsters' care as we negotiated our way through the work tasks we were given. He led without overtly leading. Every production that I was in with Ron, he was, in hindsight I recognise, responsible for the very positive and happy environment, that no matter the trials and tribulations of getting a work onto the stage, no matter the volatile creative temperaments about us, he was present to calm us down and focus our attention on solving the problems, collaboratively, together. THE LIFE AND ADVENTURES OF NICHOLAS NICKLEBY (1980) in which he as Mr Crummles led with Ms Cracknell the Acting Company of that play was the penultimate time I worked with him. His leadership was so subtle that none of us - 36 of us in 'NICK NICK' - really saw it. He saw to it that it was one of the happiest experiences that any of us had on a stage. He was a Crummles for us Sydneyites.

Ron was a Gentleman of the Performing Arts - he gained our respect by example, by just being there and doing the work. He had an easy humorous disposition that gave the rehearsal and performance space a glow of safety and comfort. He subtly encouraged us to take risks. The quality that the speakers at the Memorial who worked with Ron especially noted was his comic timing and characterisations, launched they told us by his very outrageous Australian Larrikinism. The last role I saw him in was in NOISES OFF, by Michael Frayn, in an endearingly eccentric but perfectly pitched performance as a farceur - with a physical dexterity and sense of comic timing that a man of his age should not have had, still - he was, then, remarkably 84 years young.

Our paths crossed later when I was Head of Acting at NIDA and he was a member of their Board - his gentle curiosity and warm support was a balm for my anxieties over the responsibility I had been given. His gentle touch and handshake accompanied by a reassuring smile was a support to me every time we met. His approval was a blessing for me - a comfort.

Ron Haddrick: a Family man, devoted to his wife Lorraine (and she to him - what an example?); a Gentleman of the Theatre, leading actor, subtle larrikin, cricketer and lover of the classical piano are my memories.

One, as well, should not forget his many achievements on Radio, Television and Film - a vast, vast career. One of the most prolific Australian Performing Artists I should think.