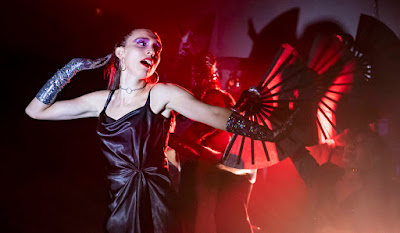 Remembers Oliver Schermacher: Matthew Lee travelling in a car from Canberra with musician Oliver Shermacher,  when he hears for the first time Hector Berlioz's SYMPHONIE FANTASTIQUE, at

full blast - bopping in my seat and enthusiastically head-banging to Berlioz' erratic and colorful music. Mat became intrigued when I described its deranged story and the eye-brow raising background of the piece as a love letter to a woman he had never met.

Though Berlioz did stalk and woo her for seven years, finally threatening to over dose on heroin, before she, actress Harriet Smithson, capitulated and married him. (Ultimately, of course, the marriage failed!)

The music piece, "SYMPHONIE FANTASTIQUE is a passion-filled quasi-autobiographical love note by the (then 26 year old) Berlioz to his unsuspecting muse, who had repeatedly rejected his advances. Likewise, his composition pens a protagonist driven to a hallucinogenic suicide by the indifference of his female beloved who haunts him. In 1830's Romantic France, it was revolutionary and even today is revered as a masterpiece of unrequited love."

So, during the 13 month Covid-19 time of contemplation Matthew Lee (Director) and Oliver Schermacher (Musical Director/Sound Designer) gathered artists Benjamin Brockman (Set and Lighting Designer), Grace Stamnas (Movement Coach), Aleisa Jelbart (Costume Designer) and a team of  seven performers : Lloyd Allison-Young, Cassie Hamilton, Clare Hennessy, Nicole Pingon, Annie Stafford, Chemon Theys and LJ Wilson to construct a contemporary performance piece that explores the creative angsts of the composer's struggle to produce his work. The language that this co-operative, Little Eggs, has chosen is mostly an a cappella sound/noise scape accompanied by a disciplined physical choreography where the collective toss centre stage and dress in a grey tailcoat and trousers, LJ Wilson, as our protagonist (perhaps the artist, Hector Berlioz), whilst they become a kind of supportive Greek-chorus in action.

The Set Design, by Benjamin Brockman, of a mirrored raised floor with a low hanging roof is dramatically lit by the same Mr Brockman to create illusory visual reflective effects that could be interpreted as part of the hallucinogenic experience of this artist - (perhaps, the representative of Berlioz). In the Costume Design by Aleisa Jelbart we are given skimpy underwear and draping blouses and other accessories all black with silver trimmings - a supposedly suggestive S&M (that is mostly quasi) I guess is the effect desired - that culminates in the principal performer being placed in a leather harness attached to a long, silver choking chain yanked by some of the cast in the climaxing moments of the 50 minute work.

Composer, Oliver Schermacher, has created a score that may use some of the famous musical thematics of the Berlioz Symphonie (I am not musically educated to guarantee that), but in his own composition/sound design seems to dwell in a European pastiche of seventies and eighties disco dance venue sounds - it begins in the pre-show sound scape and is, for us oldies, a relaxing entrance to the night.

However, one gets what the piece is doing within five minutes of the performance beginning and the Design elements and Sound choices merely become cliches of repeated boredom, and while one can admire the vocal and physical disciplines achieved by Matthew Lee and Grace Stamnas with this company, one is quickly intellectually bored. This 50 minutes is a very long night in the theatre.

One desired some original heft, some  provocation, since in their program note they suggest:

But we dig deep. Within our psychedelic narrative, we explore the fragility of our artist's ego, how their rejection descends into an obsession and visions of violence, and ultimately, steers their own path to their own destruction. ... We are eager to explore the mind of a person who does not get what they want and what they feel they deserve.

In a contemporary world of artists in positions of power behaving badly, our queer team - aged around the same age as Berlioz at the time - aim to question if his masterpiece can be harnessed to probe whether he deserves celebration for a work that champions a persistent sex pest.

Wow, their objectives are many and complicated to discuss, and possibly could be exciting to engage with, so it is sad, then, that none of that is really explored with any clarification in its kinetic offerings on the KXT stage. They have not dug deeply enough,  and they haven't found the method or language to argue their case.

Covid-19 should have provided a long time to wrestle with this work to find the  contemporary way to arrest an audience to its concerns, but LIttle Eggs misfires spectacularly in its many visual cliches in this present work called SYMPHONIE FANTASTIQUE.

P.S. It is amusing that the company wanted to provoke us to consider whether we should celebrate this work of "a persistent sex pest" and yet still to be encouraged by Mr Schermacher in his Musical Director's notes to celebraate it: "(I) warmly encourage you at home to find a recording, have a few glasses of wine, lay back with some headphones and let this piece wash over you." Clearly, Mr Schermacher has made up his mind in this endeavour. Listen to the Berlioz - it's a masterpiece no matter the present political concerns, he thinks. I do agree with him, by the way, no matter the time spent with Little Eggs. 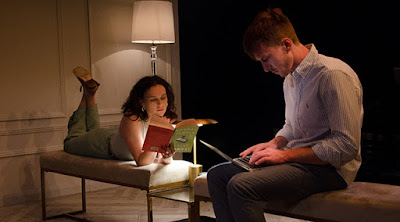 MONTAGUE BASEMENT is a theatre company led by Saro Lusty-Cavallari and in the case of this new Australian play, he is the writer, director and is the Video and Sound Designer - quite a brief of responsibility.

A couple Daniel (Jake Fryer) and Juliette (Lucinda Howes)  are stuck in their apartment during a COVID19  lockdown. The apartment has a comfortable look, resonating wealth and security, a warm wooden designed platform with two couches and practical room lighting, Designed by Grace Deacon, and has a colour support in the Lighting from Sophie Pekbilimli.

The play is made up of many short scenes sketching the journey of the couple. The play is 80 minutes long. In the very first scene we meet the pair, each involved deeply with the tools of their personal communication. One in a book. One with a laptop computer. They don't talk. They both seem to be completely comfortable with their inaction with each other. The outer world holds gripping fascination for each - the book and the laptop is enough!

With an irritating sizzle and a spat of noise we move to the next scene. The play introduces a VHS tape arriving from the unknown outer space and it seems, when the old machinery of the VHS is organised, to be a capture of the action of the couple - we recognise it when we view it with them. It is a disturbing mystery for where is the recording camera and who is recording and delivering the material - the angle of vision is not possible and yet there it is. The logic and feasibility of the possibility is thrown over by the effect of the material displayed - its rustling of the emotional connections 'feathers' of the relationship becomes the subjective wheels of the action of the piece.

Anxiety creeps into the cumulative scene 'weight' and when the Videotape on a short loop reveals the physical abuse of one of the partners with the other - we witnessed it live, it escalates to the beginning of a fever that reaches towards a peak when on a later videotape a strange woman begins appearing - who is she? what is she doing? Why? WHY? WHY! It appears not only as a recorded past but is becoming a live force on the screen to the direction of the relationship - it is live! How is that possible?!

Some of the audience in attempting to solve the intention of this play have made reference to the David Lynch film LOST HIGHWAY (1997) - it has a place in the Director's program notes, so take it on as a clue (or is it a deliberate diversionary tactic by the Director?); THE RING, a Japanese horror film by Hideo Nakata (1998), remade in America by Gore Verbinski, starring Naomi Watts (2002) also bubbles into the memory recall. But for me I kept 'hearing' the French film CACHÉ (HIDDEN) by Michael Haneke made in 1997.

CACHÉ has a bourgeois French family, comfortable and secure, that begins to receive Videotapes that progressively breaks this family into pieces. In the long (blabby!) program notes from Mr Lusty-Cavalllari he writes (online) that he feels we are ready to participate in story-telling that does not require an explanation of  what has happened. And so here we are with VIDEOTAPE that concludes playing but not explaining - it is a provocative offer, it can strike an audience that has been totally engaged, viscerally - deep in the stomach. (CACHÉ did that to me - although I stayed through the credits to the film and maybe got a clue that led to an explanation.)

VIDEOTAPE, does not hold one with the closing grip of anxiety significantly enough, so the provocation of no explanation fails - instead one feels cheated, cheaply cheated, cheated of our valuable time.

I find my inability to cooperate with the actor, Lucinda Howes, in her playing of Juliette. I believe that her acting chops are fairly in tact but her attention to her vocal work seems to be out of whack - her characterisation is pitched at a high piercing range and has over the long duologue of the play's requirement the ability to have an audience to become distracted, looking for a rest from the aural attack - an objective activity that begins to negate the subjective identity that the play requires from its audience.. Mr Fryer delivers a fine dramatic performance that has a vocal pitch (whether, conscious artistry or not) that demands attention and empathy.

So, VIDEOTAPE, at the KXT is an interesting and curious experience, although it appears in a very comfortable, familiar structure - and so, a  bit boring. However it is another offer from Saro Lusty-Cavallari that signifies here as some growing talent. Watch his progress.