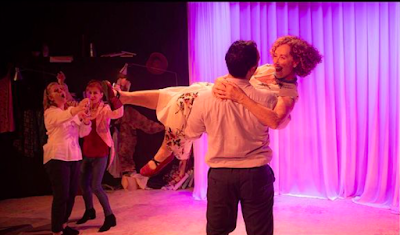 WILD THINGS, is a new Australian play by veteran writer Suzanne Hawley.  It is a story of four female friends in their sixties. They are war babies that aren't boring old farts wearing twin-sets or pearls. Think Mick Jagger, The Beatles, Bob Dylan and Janis intruding into a time of innocence of no sex education and where the rest of the world was filtered through the lens of Empire Day and the singing of the rousing "There'll always be an England". Where the life choices for the working class girls at school were deemed either Domestic or Commercial - for the University track was only for the boys - and the women's was to train to cook and clean for your man and have his babies.

Ms Hawley's Wild Things, Jackie (Di Smith), and her friends Frances (Katrina Foster), Elizabeth (Helen O'Connor) and Susan (Di Adams) we meet firstly as schoolgirls on an outdoor drawing class and revel in idealistic dreams for their future; with the blink of a costume change we are then whisked away to a weekend holiday at the near end of their arc of living where they remember their actual individual and collective paths. That cohesion of friendship and loyalty that embraces won and lost dreams is now challenged with the dilemma of the shift of one of them to the oncoming of the demands of dementia and the wish to a termination of life.

It is a real life situation that all of us are participating in, either in the first circle of pain, or in the many other circles of gradual diminishing intensity, where the distance of family origin gives space to experience it from a distance of emotional disruption. The good news is that this play embraces this 'conversation' with wit and, especially, grace. It is not an emotional endurance it is a charming, disarming circumstance.

Grace is the key word of my response. I see so much 'damaged' work on the Sydney Theatre stages - work that is damaged because the writing is not good enough; or of promising plays 'damaged' by bad acting; or 'damaged' by awful casting; by aspirational (incompetent) direction; or, by all of the aforesaid - believe me it is possible to have all of these problems effecting the one work.

This play, WILD THINGS has been nurtured over many years, coddled and cuddled by Di Smith and the late Penny Cook, and others. It appears to be ready to be seen. The subject content is of such a pregnant nerve in our present social discourse and like the 2018 play MUM, ME, AND I.E.D. by Jame Balian and Roger Vickery, dealing with the effect of P.T.S.D. on our men and women in the Armed Services, also nurtured in this theatre space, deserve to be seen on one of our main stages (Sydney Theatre Company or Belvoir).

So, on entering the Flight Path space and have this play so gently and carefully devised and written by Suzanne Hawley, inhabited by confident, grace filled actors of true experience, which they utilise - own - with modest strength, that one can, as an audience member, actually relax, breathe and are able to comfortably 'read' the offers given by the sophisticated actors who have created individual characters in an ensemble that seems to love and respect the play - the story - and the mode of storytelling that they have evolved with their director, Kim Hardwick, in the simple and spacious Design of Tom Bannerman, in Costume that assist character in an almost invisible way by Robert Bayliss. The Lighting Design has all the usual sensitivities that Martin Kinnane blesses every of his productions with - a creative figure under utilised by the major companies. While Patrick Howard creates a Soundscape that calls back the music that makes these women's bodies respond to movement that their body memories have held over decades of living to be summoned for usage in the authentic demands of the story telling of the time and space of these wild things.

These women are aided by 'Legendary' Lewis Fitzgerald (playing smoothly and generously a number of thankless functions and one or two sketches of men in the life of these women) and a new comer, Philip D'Ambrosio. This cast except for Mr D'Ambrosio are actors of much experience. This company is made up of old-school artists.

Do go to see WILD THINGS.

It is a beautiful play by Suzanne Hawley that deals with important contemporary issues with wisdom and true care delivered by a wonderful cast. There is much laughter.