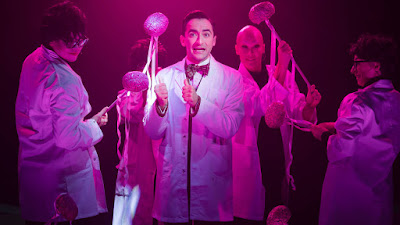 Alexander Berlage, the Director of The Mel Brooks Musical, YOUNG FRANKENSTEIN, has created a sterling record at the Hayes Theatre for revitalising, perhaps, even the resurrecting of Musicals that initially failed at the box office and critical response on Broadway. The musicals CRY-BABY (1990) and AMERICAN PSYCHO (2013) were given breaths of life by Mr Belage in Sydney.

YOUNG FRANKENSTEIN, the musical appeared in 2007, based on Mr Brooks' film also titled YOUNG FRANKENSTEIN from 1974. The musical received mixed reviews on opening on Broadway. Based on my experience of this present production at the Hayes the material that the actors have to wrestle with is not as secure as that of the other two. Certainly, it felt as if Mr Berlage had over-pitched this production with an excessive emphasis on the vulgar comedy, stretching it into a high camp milieu that fell flatly most of the night - the scaffolding of the original material could not support the creative weight of the company's choices. There was little real laughter, There were no guffaws. There was eye-filling and ear-blasting  bewilderment. One was bemused by the war on the eyes and ear and overwhelmed with consistent errors of taste, of judgement.

After the amazing response to Mr Brooks' musical version of his film THE PRODUCERS (2001) he could have been tempted to have another go with his film YOUNG FRANKENSTEIN and giving it a similar treatment. The comedy of the 1974 film in 2021 today is a hit and miss affair, I recently watched  a screening of the film on television. Writing this work for an audience in 2007 at the age of 81 the inspiration for its comedy palette seemed to have its origins not in his beloved Vaudeville tradition of sketch comedy but in a lower tradition based around the Minsky Brothers theatres of the bold near naked burlesque and comedy parodies where the 'blue' joke was the go, (Note the William Friedkin 1968 film: THE NIGHT THEY RAIDED MINSKY'S) let alone the innuendo of his other primary influence from the Borscht Belt that was part of his youth.

The structure of the show comes not so much from the literary tradition of the Mary Shelley novel, FRANKENSTEIN; OR THE MODERN PROMETHEUS (1818) but the films of James Whale : FRANKENSTEIN (1931) and THE BRIDE OF FRANKENSTEIN (1936). James Whale was a gay man and there is a belief that there is a gay sub-text to both these films, particularly the latter. Mr Brooks took 'gay' themed liberties in both his film and musical adaptation, which Mr Berlage, who has a tremendous gay-kitsch lean, evident  in his own past Directorial work, has taken extreme judgements of taste in presenting this work that really cannot bear them, which is unlike his other two musical productions, working from stronger Book and Lyrics. This production strains under its aspirational ambitions.

The Director's note in the program connecting the company's creative process to the anxiety of Covid 19 and the fear of the Frankenstein monster, seems to be a fairly ridiculous line of connection. None of this is evident on stage - neither is 'the dark social satire that examines the horrific and grotesque elements of life.' - 'horrific': Never; 'grotesque': perhaps in the elements of design, but not in the moral fibre of Mr Brooks' and Mr Meehan's writing, they had other ambitions, i think.

In a deep green Escher-step like Set design by Isabel Hudson, that cramps the staging space excessively, lit in garish lighting choices from Trent Suidgeest with the actors in Costumes from Mason Browne that can be excessive vulgarisations of character (contrasted by the naturalistic dressing of our hero 'Frankensteen'), the orchestra led by Andrew Worboys in control of the actors lands a continuous barrage of noise at the audience with hardly a rest or musical (tuneful) interlude. For the audience it can be a stressful endurance.

In the centre of this concoction is a reason to see this show, which is to witness a physical performance from Matthew Backer, as Doctor Frankenstein, that is simply brilliant in its complexity and accuracy. The body work is phenomenal - I wondered at how tired he must be after performing this gift for us? This is coupled with a singing voice of some beauty and skill accompanied by a very centred acting performance of near naturalism that holds this production from completely spinning out of control. Mr Backer is sensational.

In lesser responsibilities Shannon Dooley (Elizabeth) and Lucia Mastrantone (Frau Blucher) are also detailed with a cool and vivid accuracy that demands much effort to deliver and are much to admire.

Surprisingly, Ben Gerrard in a sex transposition as Inga, is almost invisible in impact in this production, whilst Amy Hack and Olivia Charalambous are indefatigable supports in keeping this show chugging along in relatively thankless roles.

The November, 2019 production by Siren Theatre Company, under the Direction of Kate Gaul, of H.M.S. PINAFORE, had a sure hand of a delicious and delicate campery that had wit, daring and taste that The Musical YOUNG FRANKENSTEIN does not have - cannot have because of the original Book (Mel Brooks and Thomas Meehan) and Lyric in its original material and is definitely not possible in the stretch that Mr Belage's production coats the source with. There is much aspirational ambition in the technical feats of the production - the technical teams deserve applause - but the parts do not make a whole worth enduring.

YOUNG FRANKENSTEIN, its success is going to be, of course, a matter of taste. Mr Berlage has certainly taken Oscar Wilde's advice to his bosom : "That nothing succeeds like excess".

Posted by Kevin Jackson at 7:59 PM