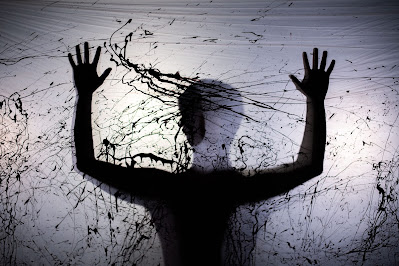 Cecile Payet is a young French artist I came into contact through an acting class situation. It is several years since we last crossed paths. Recently I was invited to attend a performance of INTACT, the debut work of this company: Fuser Production. Cecile was always an artist one thought had the determination and vision to make a contribution to the arts scene in Sydney.
INTACT, is a solo movement piece built on the physical skills of Olivia Hadley with input from Steve Lu, Cecile Payet, Emily Yalli, Sabrina Muszynski - fellow devisors. A young woman dons a uniform and wielding a weapon, she explores the physical power necessary to be an active military soldier - we witness physical shifts of some beauty and exhilarated confidence that belie the coming horrors of war and the devolving into disability - with legs that are paralyzed, demanding a whole new perspective on life and movement. The potential of a 'new' body movement is explored.
The arc of this journey uses the Set Design (Sam Wylie), a focus on a gleaming hospital gurney that with its mobility and shelving facilitates the transitions of the work from episode to episode. The confidence and trust that the performer has in the evolving characterisations is never more evident than in the propulsive Sound Design  (Martin Gallagher) that vibrates an energetic force, illustrated in the intense and flexible Lighting Design, by Travis Kecek.
This debut work can be found in a little 'hole-in-the-wall' venture, access easy from Cleveland St, with seating for 20 or 25 people, cosied up on these winter nights with teas/or coffee. INTACT is modest in budget but aesthetically beautiful and intriguing in its posed ideas - driven by a passion that is engaging and makes one curious with what this company might follow up with.
FUSER Production and Cecile Payet, keep your eyes peeled.
Posted by Kevin Jackson at 10:39 AM 0 comments

Darlinghurst Theatre Company present, ONCE, Book by Enda Walsh, Music and Lyrics, by Songwriters, Glen Hansard and Marketa Irglova, based on the film (2007), Written and Directed by John Carney, at the Eternity Theatre, Burton St Darlinghurst. 4th June - 18th July.
A few years ago on a Saturday afternoon in New York I took myself to a matinee performance of an Irish musical, ONCE, staged by the New York Theatre Workshop mostly, because it was Directed by John Tiffany. Mr Tiffany had, also, that season (2013-14) Directed a production of THE GLASS MENAGERIE, and I had been very excited by it. Alas, his production of ONCE, with the same artistic team was an irritating disappointment. The production was on a Broadway scale, even to a working bar on the theatre stage where you could imbibe and meet your neighbours, before the show and in the interval before been ushered to your seat. It was an Irish work that was deeply rooted in its Irishness  - maudlin unrequited love with a growing mystery of attraction and encouragement going on, and going on, and on, and on. It was raining outside, on the Broadway streets, a depressing cold rain, and, in contrast, my fellow audience members were boisterously excited. I was, sadly, not. Not. Not.
A week or so ago, in Sydney, on a wet winter afternoon I went to a Saturday matinee of ONCE at the Eternity Theatre. This theatre is, in contrast to the Broadway experience, an intimate exchange between the audience and the cast. The budget covers pieces of furniture surrounding the walls to create an impression of a drinking pub somewhere in Dublin which facilitates the company to sit, stand on it and even move it about. center stage etc. Too, there are a couple of doors that allow the actors to move on and off the stage to facilitate intimate exchanges between characters and fullon company songs of joy and hope. It is all a much more pleasant environment, even without the working bar on the stage.
Production Design is by Hugh O'Connor assisted by a sympathetic and useful Lighting Design by Peter Rubis. The work is Directed by Richard Carroll, aided by a Movement Director, Amy Campbell and they create a clarity and fluidity for the performance that was easy to sit through. The Musical Director, Victoria Falconer, has guided the artists to produce a handsome and empathetic sound, with Sound Designer, Dylan Robinson, balancing the orchestra instruments which are present on stage with some of  the performers, costumed as 'characters' in the bar.
Guy (Toby Francis), a street singer has said goodbye to his girlfriend who has gone to find a life in the United States (New York) that her family and Dublin cannot do for her. He will follow her when he can 'make' the money. A Czech Girl (Stefanie Caccamo), who carries an enigmatic and charismatic energy, bumps into the street busking that Guy gives and has an instinct that his music should be nurtured. Girl has her family in this Pub 'tribe' and they all facilitate the evolving talent of Guy, building a musical band around him, resulting in a recording. Over the arc of the play Guy becomes torn with his relationship to the woman in New York and with the mysterious Girl. We have never met the mysterious girl in New York and don't until almost the last beat of the work, whereas we have 'travelled' through the growing tendrils enveloping the two on stage: the Guy and the Girl. The Girl was whom we were favouring - but that favouring results only in another unrequited love.
The ensemble inhabiting this Dublin Pub all look and feel comfortable, supporting the arc and ache of most of the journey of the protagonists with the songs of Glen Hansard and Marketa Irglova, though I drift off and remember the afternoon as a long blur of songs of unrequited lamentations of love. However, this production, in contrast to my other encounters with this work, was comfortable and not one of agitation, as the others have been. Something was working at the Eternity. Toby Francis being especially attractive in his character of Guy.
This production was warmly embraced by the audience  around me. In fact, this season has been extended to meet the demands for seats. Meanwhile, I had seen COME FROM AWAY at the Capitol Theatre earlier that week. Both works are driven by the 'folk' origins of the given circumstances of the story telling, Ireland or Newfoudland. However, the personal love life of Guy in ONCE is overwhelmed, in contrast, to the relative vastness of the lives of the visiting passengers and the citizens of the city of Gander of COME FROM AWAY. The humanity of both works make ONCE a 'micro' or 'COME FROM AWAY a 'maxo' illustration of an optimistic possibility for the homo sapien, as a species, in places and times of significant stress.
I can thoroughly recommend COME FROM AWAY as a pertinent contemporary conversation in contrast to the 'siren' calls of the over familiar dilemmas of ONCE.
See both, if you have the time and money.
Posted by Kevin Jackson at 10:35 AM 0 comments