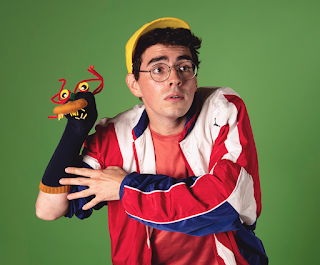 Because of mitigating circumstances in my little personal life I have pulled back from attending the theatre (The contemporary cinema seems to be more rewarding!)  The last time I went to the theatre was to see DEATH OF A SALESMAN at the Roslyn Packer Theatre in December.

So, I ventured out as the Pandemic seemed to have quietened and my medical adventures, too, have become more manageable if not "cured'. I have a loyalty for the Red Line and Old Fitz and as well admire the work of the director of this production of HAND TO GOD, by Robert Askins: Alexander Berlage.

In between the deluge of rainfall that Sydney has been enduring I got myself to the theatre with a young acting student as my guest.  By Public Transport as I have never driven!

The Set Design, is what we see on entering the theatre, by Jeremy Allen and Emma White, and is at first, in the back halls of a minor Christian church in Cypress, Texas, where a recent widow, Margery (Merridy Eastman), holds classes in a  self-created Ministry of Puppetry, to spread the stories of Jesus and his gospel. The walls of the hall are painted with many stirring missionary images of Jesus, including one wrapped in the Stars and Stripes of the good old USA. There are several other locations we travel to which the Designers have facilitated with deft choices for speed and identification.

Margery's teenaged son, Jason (Philip Lynch), is in trauma and has created a hand-sock puppet called 'Tyrone' in class that has begun to help him divest his grief  and anger at the loss of his father and at the 'bewilderment' his mother seems to have adopted as a way of being. To say 'Tyrone' is an angry puppet is an understatement and he becomes more and more uninhibited - foul-mouthed and gross - in expressing his rage. It appears that Jason has become 'possessed' by the devil and has developed a split personality: SPLIT!

Pastor Gregg (Gerard Carroll) who has a passion for his parishioner, Margery, (and it is fairly 'muscular' in expression), has conceived Jason is in need of a good old-fashioned exorcism  - his wooden crucifix in its leather holster - which in misadventure compounds to make a most tumultuous resolution. Sometimes satirically funny.

Whilst Jessica (Michelle Ny), another church-goer having a crush on her friend Jason has developed a puppet of her own, 'Jolene', who exhibits free-wheeling sexual fantasies and breasts stuffed in the sock-puppet to rival, in scale, those of Dolly Parton!  The scenario that Jessica has imagined for 'Jolene' is creepy and disturbing to the extreme -  with what 'Jolene' offers 'Tyrone', laughter may be the only sensible way to receive it in the theatre.

The play purports to talk of faith, morality, religious hypocrisy, and the frailties of trauma in a family visited by 'death'. In production it is more interested in making us laugh no matter the appropriatness of technique or content. HAND TO GOD, first appeared off-Broadway in 2011, returned to a larger off-Broadway theatre in 2014, and then migrated to Broadway proper for a ten month season in 2015.

Twenty minutes into this very good production, I just felt that the content and concerns of this play had been made radically outdated since the pressures of world climate change and the epidemiological traumas in our lives that has confronted us. This play now just seemed trivial and ultimately vulgar and a horrifying example of the gross hedonism that we as a cultural community had evolved in accepting HAND TO GOD as a normality.

I became swiftly objective in this experience and brooded that if this is what the gate-keepers of Red Line believe is the play we need in our lives, in 2022, today, I had better take more care about what I decide to spend my precious time watching. The content  of HAND TO GOD, and its contemporary appropriateness turned this night and my effort to attend as a total waste of my time. And, this is no matter the very clever work by all the actors, elicited by Alexander Berlage, supported by all the other artists, including the contributions of the Lighting Design by Phoebe Pilcher and, especially, the technicalities of the Sound Design by Daniel Herten to finding the way to tell this story by American, Robert Askins to us.

For, it is wonderful to welcome Merridy Eastman back to the theatre, who gives a nuanced performance of wonderfully gauged choices in comic technique married to a moving - heart-on-sleeve emotional sensibility. Her Margery a three dimensional woman in an hysterical farce. Her  Margery is in desperate need of rescue, and it is so palpable that one wants to reach out to hug her and quieten her life grief. Ms Eastman's is a standout performance, one so complex and so vulnerable.

Philip Lynch is striking in his energies in inhabiting Jason with 'Tyrone' grafted to his right arm, but, it is a performance in action that seems to beggar us to admire Mr Lynch's work - the actor's consciousness dominates the story offers, preventing us from identifying sympathetically with the back-story quandries of Mr Askins' character, Jason.  Mr Lynch whilst relishing his opportunity to play this split personality lets his personal satisfaction with what he is doing show.

Ryan Morgan, Michelle Ny and Gerrard Carroll, with writing that is relatively threadbare for their characters' backstory and journey, still manage to triumph with full on commitment, even when they are grossly larger than life. They definitely keep us in the loop of this genre's technicalities.

HAND TO GOD, then, despite the professionalism of all the artists involved has dated considerably since its first appearance, 11 years ago. It is a long time ago. In the cultural climate of 2022 this play is a hollow relic of another time and value sensibility. Mind you, on the Opening Night, some of the audience were whooping it up - friends of the theatre and actors or general public? Who knows? My companion and I were not so easily pleased. It will be a personal decision to 'give in' or decline, push away.

There are recent plays out there that have surfaced  elsewhere and deserve to be seen in Sydney. Red Line ought to check out the resources of a competing Sydney company: OUTHOUSE. OUTHOUSE seem with every work they bring to us to find theatre experiences that are pertinent, challenging and entertaining. e.g. ULSTER AMERICAN, GLORIA, JOHN. All three of these contemporary plays (and others) changed its audience point-of-view of the world that they and we live in. The writers having the courage and the intelligence of wit to entertain us as well. It all begins with the quality of the writing, the writer.