An American in Paris, A New Musical 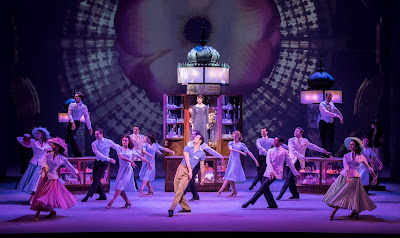 The Australian Ballet, GWB Enterprises present, AN AMERICAN IN PARIS, A NEW MUSICAL under the Direction of Christopher Wheeldon, adapted from the MGM Vincent Minnelli Musical Film, with a new Book by Craig Lucas, Music by George Gershwin and Lyrics by Ira Gershwin, at the Theatre Royal, Sydney. 20th April - 20th June.

The MGM Musical film of 1951, AN AMERICAN IN PARIS, Directed by Vincent Minnelli, made famous by the dancing of Gene Kelly with a famous film debut performance from Leslie Caron and a Musical Score with Lyrics by George and Ira Gershwin, is the inspiration for this stage Musical.

This stage work has been adapted with a new Book by American playwright, Craig Lucas, under the direction of  British Choreographer, Christopher Wheeldon. The first significant change is the Setting of the time it sits in, originally in the film a more comfortable early, gradually resurgent late 1940's, early 1950's Paris, now, at the opening of this show at the Theatre Royal, we begin on the actual liberation day in 1945, when in a war torn, exhausted Paris the Nazi flag is torn/brought down and the triumphant Tri-colours of France are hoisted into the air, claiming at the same time its history and of the aspiration of the restoration of Paris to be, once again, the beating artistic heart of Europe.

The backdrop of the stage design by Bob Crowley, takes advantage of contemporary technology and uses digital projection, organised by 59 Production, to have the stage wide collapse and rise of the two opposing flags of Germany and France, with a thrilling and triumphant statement. The Bob Crowley 'magic' continues spectacularly throughout the production employing the colour palette and shape contents of famous artists of this time: Monet, Renoir, Picasso, Mondrian, to back the striving modern dance choreography and cabaret scenes of the City of Paris. That colour resource is apparent in the Lighting Design of Natasha Katz, and in the costume of the performers as well. The costuming of this production appears to be immense and the ensemble are mightily tested in the elaborate swift changes that they must make to continue this production without a wrinkle to its technique in achieving a sleek smoothness in its storytelling journey.

With the change of date, the fears and weariness of war, are inserted by Mr Lucas, into the stories of a few of the victorious American armed forces in Paris meeting and mingling with the French survivors, introducing the poisonous and ruthless, insidious political monstrosity of anti-semitism that still persisted in the psychological abuse present in a supposed liberated world, post 1945. The name of our Narrator/composer American soldier figure is changed from Adam Cook to Adam Hotchby to underline his Jewish heritage (out of respect to the  Gershwin family Jewish heritage, I suppose) and with the introduction of a French Jewish family, Madame and Monsieur Baurel and their son, Henri, who reveal their resistance activity during the German (Nazi) occupation of France. It attempts to bring a layer of serious contemplation to the world of this musical. This conceit works more or less, depending entirely on your own disposition.

The other thematic gesture is the careful layering in of the development in Art: painting, music and dance. Of the quiet battle between rigorous classicism and the exploration of the modernist stretch into the abstract image on painting, sculpture and the choreographic shifts of other types of dance movement, with the accompanying explosion of Jazz as a means to express life in modern times, adopting the sounds of the machinery of war and industry, into musical composition for both classical and popular contemporary stages, in the Concert Houses, the Cabaret and  radio platforms! This conceit works a treat.

The structure of this Musical book is, unfortunately, formulaic. The classic romantic-comedy leads, supported by the second-banana buddies, and pushing against traditions represented by the older and supposedly wiser Elders of the tribe. Jerry Mulligan (Robbie Fairchild) and Lise Dassin (Leanne Cofe), Adam Hotchby (Jonathan Hickey) the romantic leads; Henri (Sam Ward) and Milo (Ashleigh Rubenach) as the second-bananas, he an aspiring Cabaret performer, she an enthusiastic American art philanthropist; with Anne Wood and David Whitney as the resistant Elders, Madame and Monsieur Baurel.

The conformity of the Book, however is created and sustained by the expertise of the performers. The dance drives the production; the ballet world and the cabaret/musical theatre world. Robbie Fairchild (once a member of the New York City Ballet) and Leanne Cofe (once of the Royal Ballet, London) are wonderfully skilled to act as both soloists and partners of the Christopher Wheeldon choreography, Mr Fairchild is particularly brilliant. Both can also sing quite well. In the Cabaret world, Sam Wood, and Ashleigh Rubenach are delightful both as singers and dancers of that world. Mr Wood a bit of a scene stealer - in a good way, I mean. While the entire ensemble are required to dance in the ballet and cabaret mode - the tap dance, particularly rousing. They are impressive. Some 33 performers I read!!!!

The ingredients of this AN AMERICAN IN PARIS is first rate, and yet the sum of the experience is a trifle dull. The long 17-minute dance sequence - the climax of the intentions of the work - does not quite achieve its focus or our hold attention - true, for me, in the film, as well - and one felt that there were too many endings to the show. It just kept going on and on. At 2 hours and 20 minutes, perhaps a firmer editing was what was called for. I saw the New York Production as well, and it had a much larger space and, certainly, the 'pool' of high quality artists to choose from much, much larger. There, too, on Broadway, the time palled.

Is it the lack of genuine Gershwin songs that defeated the experience? We had:  "I got Rhythm"; "S 'Wonderful"; "They Can't take That Away from Me","Stairway To Paradise"; and a few others, and when the orchestra lighted into full swing, led by Victoria Scammell, we were transported to a kind of Heaven but it seemed to me (and I am no expert), the other adaptations and orchestrations by Rob Fisher were less than impressive. When I recognised phrases from other Gershwin material I lit up with empathic recognition, only to be disappointed that we didn't get more of it. Was it that the Gershwin was relatively light on in the two hours twenty minutes? Is that the explanation for the disappointed feeling at the end of the night?