The Greening of Grace 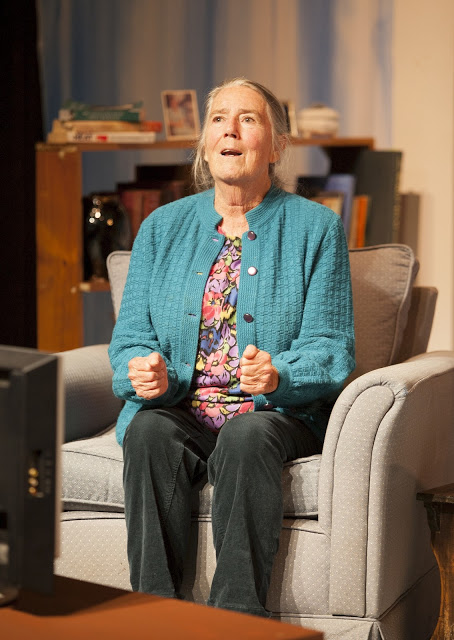 THE GREENING OF GRACE has William Zappa, one of Sydney's great actors, writing.(Not for the first time, WINTER'S DISCONTENT of course).  He joins a collective of other actors, who, this year have written for the theatre: Toby Schmitz (I WANT TO SLEEP WITH TOM STOPPARD) and Ian Meadows (BETWEEN TWO WAVES). All of them well. It is interesting to note that Mr Meadows and Mr Zappa have both tackled the calamitous and controversial contemporary social issue of Climate Change. Good to see the present big-world issues in conversation on our stages.

The play concerns, chiefly, Grace (Maggie Blinco). She is defined in the play by her revealed relationships: to her feisty anti-class, anti-wealth warrior husband, Derrick (Don Reid), recently deceased; her self pre-occupied daughter, Jane (Wendy Strehlow), struggling to find her 'identity' again after divorce, unruly progeny and a new wealthy, muscular-Christian husband, Phillip; to an emerging, endearing concerned eco-activist of the modern era, her grandson, Tim (Nigel Turner-Carroll), and an aggressive intruder/stranger who has violated her sensibilities to a make or break choice for survival.

Inspired by a real life heroine, Florence Holway, Mr Zappa has created a character who finds survival in the investment of her life energies into the embracing of attempting to redress the dangers approaching our planet. Replacing dogmas, religious or secular, with a commitment to the power of creation - whether it is God or Science.

The play in form, slips between the present and the past, from direct monologue to the audience, to conventional scene writing between characters, and dumb show - a particularly beautiful silent interlude concerning Grace and the intimation of the great loss of one's partner, is staggeringly moving for its eloquence - one longed for more of them. The production and the acting slips easily from one form to the other.

There is 'political' debate about many contemporary social and personal issues - all seeming relevant to me - but they are not always broached in subtle dramatic 'veilings', but, still, always with wit and compassionate humanity. There is still some evidence of the writer's naked need to express his urgent, exigent climate concerns. However, what is true of some of Mr Zappa's writing is also evident in that of Mr Meadows' as well in his recent work at the Griffin: BETWEEN TWO WAVES. Despite an overtness to the principal thematic in both these plays they are very,very, appealing. IN THE GREENING OF GRACE, the relationships are intense and real. Very, very untidy and not resolved - life-like. It is one of the strengths of the evening.

The other is the verisimilitude of the acting. Ms Strehlow, following on from her taut wife in I WANT TO SLEEP WITH TOM STOPPARD, gives another complex reading of an unhappy woman searching for an inner peace, painfully floundering but persistently searching, striking out at most and blinding herself to other stuff to cope. Mr Turner-Carroll, sympathetically creates a modern young man, a poet/scientist of a familiar ilk, growing up before our eyes, sorting out the personal relationships of family within 'bigger picture' eco-politics. Its simple directness is enhanced with a glowing and palpable heart beat. Seemingly effortless.Technically flawless.

But the particular joy for me was to see two of the more senior members of the acting profession in Sydney, Mr Reid and Ms Blinco creating from the source of Mr Zappa's writing, life forces of such technical richness, along with the obvious joy of creating, performing. Mr Reid has an irascible, old Aussie bloke of implacable Aussie social prejudices to create, and manages to bring a faceted prism of simple core humanity to an archetype. We have seen this kind of man before, often on stage, and certainly in life, but within the honed skills of this actor he is welcomed with, from me, a kind of relieved recognition - as if meeting one's long lost grand dad - I know "the old bastard" - I venture we all do!

Ms Blinco, gives, as the evening winds on, a very detailed and identified woman of kindness, fortitude and strength in her Grace. There seems to be a combusting nakedness of self-revelation from Ms Blinco and she brings it to bare with daring in her exploration of this remarkable character. When is it Mr Zappa's Grace? When is it Ms Blinco? It is a fascinating act of bravery that is going on. Uncanny to watch the in and out's of theatrical possession. And, what one shouldn't forget is that this is a mammoth role, demanding in its length, let alone in the emotional charting of its journey that would tax any actor of any age. Ms Blinco tells me this is the biggest role she has ever been given opportunity, in her long career, to share - and she is relishing it. It is an admirable thing to witness - this performance. Sure, it has nervous waverings, now and again, but Ms Blinco, quietly takes stock, settles again, and sweeps you up, out of any of your momentary disbeliefs, and the concerns of Grace become ours.Winningly deep.

This performance was not just the greening of the character Grace, but also a treasured observation of the graceful ageing of two of our senior artists, greening in front of our eyes with the vital sap of the need to continue to create. Mr Zappa has written this work and understands about writing for an actor. Mr Zappa has cast and directed this work and understands, caressingly, how to coax his actors into acting, that is not just "being" but "becoming', moment to moment. In a recent interview, Judi Dench denies any want to retire, and certainly her opportunity to act is great. For me, to see the work of Mr Reid and Ms Blinco, here, gave me similar aspirations for many of the actors 'waiting in the wings', who similarly do not want retirement but opportunity.

Apparently, in  English pop culture, it has been coined, that to be 'denched' is to be cool (James Bond 'M' cool). In Australian vernacular it might be, shall we coin, "blincoed"!? Or, has Jacki Weaver stolen the march, and to be cool in Australian terms, is to be "weavered"? Another, veteran of the Australian theatre, making a mark in the animal kingdom of the performing arts of late!

The design elements are relatively modest but are enough to give security of belief.

I have become a little rhapsodic about my night in the theatre with this play, but on the night I saw it there were, may be 12 of us, one dear asleep, and, not quietly - the actor's didn't hear, thank goodness - and I believe it deserves some appreciative attention. The Independent Theatre scene once again being daring and truly collaborative. On our night, magical and majestic. Get along and see for yourself. Expect simplicity and vitality and urgent social debate.
Posted by Editor at 10:59 PM