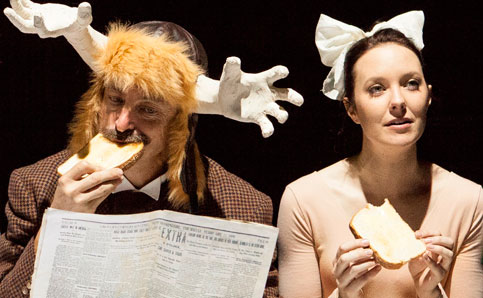 The Sydney Theatre Company, this Production at least, has forgotten to tell us, in their program notes, anything about the actual originator of this material, the writer, Tadeusz Rozewicz. Everybody else, BUT, not the writer. The adaptor even, BUT, not the writer. This is not an unusual event in Sydney theatre going. The writer is often forgotten in the flowering of the enterprises on our stages. Respect is not always discernible. (The director has never been neglected in the program notes, as far as I can remember). Anyway from what I could Google: Mr Rozewicz was born in Poland, 1921 and is still alive, and a highly respected poet and playwright. In 2007 Mr Rozewicz won the European Prize for Literature.

This production of MARRIAGE BLANC was inspired by the delight of the Director, Sarah Giles, to the reading of the text, "not just because it has two excellent young, strong, funny female characters at its core, or because it appeared wildly challenging to stage, but because it posed questions that fascinate me: what is it to wrestle with your gender and body. Realising your gender, body and sexuality have repercussions for you is a huge moment in any one's life. You can't escape them. They aren't things, we can just neatly tuck into a pair of tight jeans and hopes no one notices. Beneath our clothes is our own very real nude suit - and we can't hide from it. But most of us try."

Some of the above was true for me: It is indeed true that Paige Gardiner as Bianca of the 'white marriage' and, especially, Katie McDonald as Pauline, her very sexually aware younger sister, give strong, funny performances. Delightfully so. It is also true that Ms Giles continued to impress with her acumen as a director in staging this very strange play.

I have no idea what was going on in Catholic-Communist Poland in 1975, to, and, or for, Mr Rozewicz that he felt the need to write this play, for a Polish audience. This production does not further enlighten one either. The play is set at the turn of the 20th century, with some very surreal imaginings, and, what, felt for me, a weird White Hall British sex farce tilt -especially with this production's costume (Renee Mulder) and set and props designs (David Fleischer).

All the actors gave sterling and committed performances: Gig Young, Sacha Horler, Peter Kowitz, Lucia Mastrantone and Sean O'Shea, and, I thought the composition of the theatre music by David Heinrich, very arresting.

It was a strange night in the theatre. The play just failed to engage me in anyway. I did not 'dwell' in it, on any level. I sat, way, way outside it.
Posted by Editor at 10:43 PM