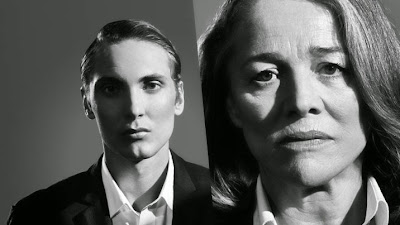 SWITZERLAND is a new play by Australian playwright Joanna Murray-Smith. It was originally commissioned by the Geffen Playhouse, in Los Angeles, and will be seen there in 2015. This production by the Sydney Theatre Company (STC) is by special arrangement with that LA company. Ms Murray-Smith has had many of her plays performed around the world, and has been translated into dozens of languages, and even been touted in US Variety as "Australia's foremost female playwright".

SWITZERLAND is made up of three scenes over one act (about, 1hour 40 minutes) for two characters: Patricia (Sarah Pierse) and Edward (Eamon Farren). Patricia is an American novelist/short story writer, living in Switzerland. Edward is a representative of her publishing firm seeking a signed contract from her, for a new book - a previous representative, after an alarming circumstance, having failed to do so. Patricia seems to be in a deep entropy of writer's block, and Edward proceeds to attempt to revitalise and encourage the writer to creativity.

In SWITZERLAND, Ms Murray-Smith borrows heavily from the life history of the famous American novelist/short-story writer, Patricia Highsmith. In Ms Highsmith's extensive repertoire, the most famous are likely to be a series of novels known as, The Ripliad, that is, five novels featuring the character Tom Ripley: the first, THE TALENTED MR RIPLEY, written in 1955; the last, RIPLEY UNDER WATER, written not long before her death, in 1991. Her first novel STRANGERS ON A TRAIN (1950) was, famously, made into a film by Alfred Hitchcock, in 1951. However, the most successful translation from the Highsmith page to the silver screen was probably the 1999 film, by Anthony Minghella, of THE TALENTED MR RIPLEY, starring Matt Damon, Jude Law, Gwyneth Paltrow and Cate Blanchett (there is, also, a French version, PLEIN SOLEIL (1960), starring Alain Delon). Recently, THE TWO FACES OF JANUARY (2014), with Viggo Mortensen, Kirsten Dunst and Oscar Issacs has appeared, and a version of her second novel, THE PRICE OF SALT (1952) (or, CAROL), written under a pseudonym, Claire Morgan (the subject matter is lesbian themed), with Cate Blanchett and Rooney Mara, is due in 2015 (Knowing THE TALENTED MR RIPLEY, will make entry to the games of SWITZERLAND, easier).

Her publisher, Otto, Penzier has said:

Graham Greene called her a poet of apprehension. Her friends called her pathologically stingy, neurotic, horrible. These points of view are amplified, by Ms Murray-Smith, gloriously, in SWITZERLAND. The 'wickedness' of this woman's tongue, combined with a collection of socially, inconvenient politically-incorrect prejudices, which she did not censor for acceptability, brings a bracing night to the circumstances of this play, in the theatre. Her own sense of her talent, which was marginalised by her American peers and critics, but, upheld by the more (erudite) Europeans, highlighted by the French Ministry of Culture's award to her, in 1990, with the Chevalier dans L'Ordre des Arts et des Lettres, only justified her bitterness towards her own country, and the reason for her choice for living in "neutral" Switzerland. Add to this the clever adoption, by Ms Murray-Smith, of the creeping and subtle tensions that belong to the literature stylistics of most of Ms Highsmith's novel writing, with her acute observation of the behaviour of the human animal, particularly those of a dangerous bent, and a superior comic thriller, called SWITZERLAND, is to be had.

But more than this, and this is what I believe makes this play a highly sophisticated pleasure, possibly, in Australian dramatic literature terms, a great one, is Ms Murray-Smith's investigation, revelation of what, maybe necessary for great artists to experience in order to create. In Patricia's journey in SWITZERLAND, there is a kind of metamorphosis from a Dr Jekyll to that of a powerful Mr Hyde; the permission for one persona, one of our alter ego's, as a creative being, to be exorcised, to allow a possession by another, so that great art can be made. Darren Aronofsky's BLACK SWAN (2010) sprang to mind in the thrilling, concluding moments of this play.

Sarah Pierse's Patricia ranges around this stage with the hunchbacked-gripping of the gathering challenge of the lack of time that a fatal illness throws into focus, illuminated by a mind of fearless and fearful insight into the darkest possibilities of man, spewing sparkling verbal cruelties as only the rich can disperse jewels, displaying Patricia's overpowering melancholy that she could lay in an eternity of mediocrity, unless she writes once more and bring her greatest achievement, Tom, back to lfe, to be one of the immortals in the continuous world of appreciated literature. This is a concentrated performance that seems to be inspired to do honour to the fascinating energies of both, Ms Highsmith and Murray-Smith. The best of Ms Pierse's performances that I have seen.

Eamon Farren, begins as an Edward and finishes as a Tom. From an innocuous callow youth, in a kindred appearance to hiking gear, to a self-consciously callous youth, in a beautiful long-sleeved, billowing yellow shirt with a tucked-in silk cravat. It is a subtly calibrated, graduated, performance of remarkable skill, and gives to this, relatively, young actor, the role: Grand, that he has been stalking, with all of his recent remarkable contributions, as a supporting artist, to so much of his other work in Sydney theatre: MOJO, ROMEO AND JULIET, MRS WARREN'S PROFESSION, BABYTEETH. Here, with SWITZERLAND, he has been given the breadth and license of great contemporary writing with a character with a thrilling trajectory, and he wastes not a moment of opportunity with all his talent and gifts, to make a significant mark on the Drama Theatre stage.

Sarah Goodes, too, matures her talent here, with an almost impeccable vision and control over the source material she has taken on - her production of Hilary Bell's SPLINTER, her instincts for the 'supernatural', to spook us, is recalled to mind. For her collaboration with her actors has all the hallmarks of an Hitchcockian disciple, guiding the pair to unique creations and seamlessly joining their energies to the perfect concentrated ensemble of mutuality of effect. Combining, then, the beautiful and realistic set, Designed by Michael Scott-Mitchell across the full width of the Drama Theatre stage; atmospherically sensitive Lighting by Nick Schlieper, causing, even the spectral reflections in the window glasses a sense of omniscience; aided by Composer and Sound Designer Steve Francis and his sinisterly apt score, we have a production of a rare and consistent quality.

This production gives the play all the symptoms for a successful American career, at least. If not, elsewhere, as well.  Ms Murray-Smith has already graced the stage on Broadway and London with her play HONOUR, in 1998 and 2003/2006, respectively, This one set location, two actor, psychological thriller, using the life and achievements of an American novelist, Patricia Highsmith, called SWITZERLAND, may, very well be her next one.

I was in a thrall of excitement during, and after this performance, and urge you all to see it.

I might, if I can save up the shekels, go to see it again. A very, very good time in the theatre. The best in 2014, perhaps?

P.S. and N.B. : However, do check to see if the STC, like Belvoir, have begun DYNAMIC PRICING. What is that? Well, on the Belvoir website, we are told: "Ticket prices can be dynamically adjusted, either up or down, on a small number of tickets, based on real-time market demand, and without notice. Prices listed below account for the majority of tickets but please contact Box Office for current prices on all tickets available."

Prices can go either up or down based on real-time market demand! And without notice! So, if the show is in high demand, then let's 'gouge' some more money out of the ticket buyers, is that it? The Government subsidised not-for profit theatre companies, Open for business, indeed!!!! Did the STC engage in this practice with their production of MACBETH? I have no doubt that SWITZERLAND will go into high demand - I wondered which way the price of tickets would go, up or down, if the Belvoir had produced it? Is the STC, too, open for business? On a similar track? And, will the in-demand ticket prices go, up or down? Any sports bettors or TAB betting members out there? What would be the odds for either choice?