BATTLE OF WATERLOO, by Kylie Coolwell, is a new Australian play. This is the Indigenous play that I have been waiting for. Ms Coolwell has written a work from the heart of an urban Indigenous community, in the contemporary world of the housing commission buildings of Waterloo, not far from Redfern, set in the thrilling pulse of the everyday and centred on the robust life of an extended family.


"This play," says Ms Coolwell, in the program notes, "is a love letter to Waterloo. ... I moved to Waterloo six years ago with my man. He was very well known in the community, so it wasn't long before it felt like I knew everyone. I can walk down streets where everyone knows my name and my dog's name and can ask me ' How is the acting going, sis?' Never before have I lived in a suburb where I have felt so much of a community. I am so incredibly grateful that I moved to Waterloo, for though tough times can be hard, I am supported by the love, generosity and friendship of the residents.

Cassie (Shari Sebbens) has wrestled her life into place for a positive future and is about to graduate from a course at the local TAFE in Fashion Design. Living with her "Aunty" Mavis (Roxanne McDonald), in one of the Housing Commission Towers in Waterloo, a struggle with the addictions of her sister, Sissy (Shareena Clanton), under the influence of a neighbour, Leon (Guy Simon), and guiding the younger relative, Jack (James Slee), with his ambitions in the local football competition, is brought into sharp focus with the return of her one-time boyfriend, Ray (Luke Carroll), from a three year prison incarceration. The pressures of these events are the crucible ingredients that we watch unwind.

There is in the BATTLE OF WATERLOO, a contemporary unspooling of these 'melodramas', and it is uniquely told through the experienced resource of Ms Coolwell's witness of a life that she is deeply connected too. She produces an 'authenticity' of observed truths, that tell a more than familiar story-form loaded with drama, comedy, music and emotions within the social, political boundaries of an urban Indigenous culture that is perceptively, lovingly delivered. The audience unfamiliar with the 'lores' of the urban relationships of these Australians become informed:"educated''. The audience that knows this world recognise and uproariously embrace its telling, its mirror images. The situations, the relationships, the (robust) language, the music all soar in this play with a joy and celebration that is palpable and richly rewarding for all of the audience, stranger or familiar.

Ms Coolwell's play echoes for me, the Irish-Australian working class immersion in the familiar family/community revealed in plays like Peter Kenna's, THE SLAUGHTER OF ST. TERESA'S DAY (1959), A HARD GOD (1973), or even more relevantly, as it, too, is set in Redfern, Dorothy Hewett's THIS OLD MAN COMES ROLLING HOME (1967). I remember the joyous experience of seeing my 'tribe' on the stage in all its glorious irreverences - grandparents, uncles, aunts, cousins, brothers and sisters, neighbours, and their struggle with the status quo of the outside world. I felt, my grandma and my kith and kin, pridefully celebrated.

In the United States I remember the treasured memories of being in an almost completely African-American audience watching August Wilson's JOE TURNER'S COME AND GONE (1988) and MA RAINEY'S BLACK BOTTOM (1984), and at a performance of Wynton Marsallis' Pulitzer Prize Jazz Oratorio, BLOOD ON THE SANDS (1997), in San Francisco. These were a celebratory insight to life, of lives, on the stage, that gave a sense of pride and self-respect to the audience watching. Empowering them. I felt honoured to have had such an experience with them.

Here, at Wharf 1, with BATTLE OF WATERLOO, there is an unabashed exhilarating roller coaster ride that gives a mature recognition to a part of our community that has only just (belatedly) begun to breakthrough to an awareness in the larger culture. The story is told as entertainment but has seeded, throughout it, political observations of some clout, the more powerful because of its 'glancing' referencing, for there is no overt didacticism here at all, no nagging rage/anger, but a use of a story-telling skill that reveals the Indigenous characters by normalising them with a kind of human resignation, appreciation and humour, showing their struggle, world and lifestyle/philosophy, as survivors in a, relatively, hostile status quo. As I was with the privilege of witnessing the African-American experience in the theatre, I felt humbled and honoured to be present at this performance, sharing it, together, with some Indigenous audience.

Sarah Goodes, has Directed this play and production through a development history of some investment, and what she has achieved is another sign of her maturing. Last year SWITZERLAND, gave me the sense of the talent's ripening. Her work with the Designer, Renee Mulder, both Costume and Set, particularly the setting, is atmospheric, but also solves the diverse locations required with ingenuity and ease. The fluidity of the action in the play is achieved through the sophistication of thought in this design, and the usual sophisticated gifts, offers, of the Lighting Design, by Verity Hampson. The Sound Design, but particularly the Composition, of Steve Francis, envelopes and subtly highlights the temper and narrative of the writing and production, too.

Ms Goodes, has cast well, and then has wielded a liberating but disciplined 'hand' with the guidance of her company of actors. The 'full-bore' speed of the production is thrilling and detailed, counter-balanced beautifully, with moments of stillness, meditation and gentleness - showing, giving, 'private' moments of revelation to permit the audience to endow empathy to the people of the play (note, the beautiful phone call moment given by Mr Carroll), in contrast to the pell mell of the musical actions. Ms Sebbens and Mr Carroll as the two 'lovers' at the centre of the play's concern, seize their opportunities provided by Ms Coolwell and, latterly, Ms Goodes, with wonderfully nuanced conflictions in their character's life choices. The pain, ambition, compassion, strengths and weaknesses, laughter, sex and struggling sensibility in exploring their characters, the cost of compromise and personal negotiation, is delicately and deeply experienced for the audience - the tragedy of a contemporary Romeo and Juliet, perhaps?

Around them, the company support strongly the actions of Ms Coolwell's world. Ms Clanton is breathtaking in her work as the addicted Sissy, Mr Simon (an actor's actor, I reckon) brilliantly, subtly creates a comprehensible 'lost soul', innocently trapped in the world he knows, and young Mr Slee impinges on one's experience of the play with a, relatively quiet, but insightful figure of hope for the future of this family. The mature members of this family are gently told by Ms McDonald and Billy McPherson.

It is interesting, arresting for me, to see Ms Coolwell, a first time writer, handling with a Chekhovian sophistication the presence of seven characters in a long complicated scene with such skill and confidence. All the characters in the stage time develop and contribute to the 'gorgeous' fabric of her detailed world. No-one is a mere functionary in any of her scenes, each of the characters, under the watchful guidance of Ms Goodes, seem to grow complexly in front of us, as the play tells its story. An actor has written these roles and appreciates the famous Stanislavsky quote that there are no small parts, only small actors!

In 2013, the Sydney Theatre Company (STC) brought us THE SECRET RIVER, and the audience response was huge. BATTLE OF WATERLOO is, for me, a more contemporary relevancy for what was appreciated and celebrated in Mr Bovell's adaptation of Kate Grenville's novel, and should strike the same chords for an audience. The STC has nurtured this play, writer and production and congratulations are due. I was moved and excited by this play - old fashioned in its form, but rewarding because of that fashion - fulfilling a deeply rooted need for simple 'tribal' story-telling for our fractured and distracted moral times and community. One hopes BATTLE OF WATERLOO becomes a classic for Australian playwriting, much like Lorraine Hansberry's 1959 breakthrough for the American mainstream,  A RAISIN IN THE SUN did for the African American artists and community.

Do see (one wishes that the local Indigenous population, that is at the centre of this joyful explication, could afford to see it).

P.S. It is amusing that this day, the 15th of June, is the 200th Anniversary of the actual Battle of Waterloo, between the British general, the Duke of Wellington, and the French general, Napoleon. 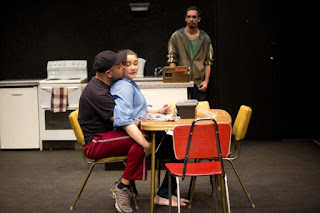