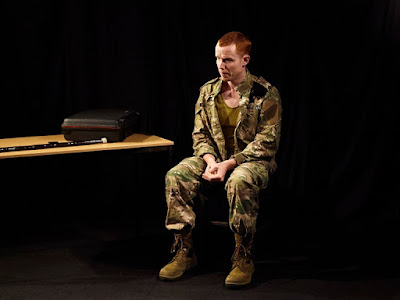 BULLY BOY is the nickname belonging to a group of British soldiers assigned to the war in Afghanistan. It concerns the investigation of an 'incident' in the heat of war, where a mother and son were killed during a skirmish - the 8 year-old boy thrown down a well, where he drowned - 'collateral damage'.

BULLY BOY, written in 2011, by Sandi Toksvig, is a play for two actors. Over the course of the play, Major Oscar Hadley (Jaymie Knight), interrogates Private Edward Clark (Patrick Cullen), a survivor of the incident. The play explores the dynamic between the two men over the time of the investigation and contrasts the official/public relationship between Major Oscar Hadley and Private Edward Clark, and the private one between, Hadley and "Eddie". The rigour of army law and ethics versus' the compassionate knowledge of the unpredictable possibility of human behaviour under duress. The nature of war and the personal cost to the participants in it, is the play's central concern.

BULLY BOY is made up of many short scenes, juggling through various time placements and locations, both in Afghanistan and Britain, re-iterating a point-of-view that we have seen on our small stages over recent time, regularly. This production is Directed by Deborah Mulhall and is similarly thematically connected to her work at the New Theatre last year: BRITANNIA WAVES THE RULES, by Gareth Farr - a much better play (Simon Stephens', MOTORTOWN in my opinion, being the best of this genre that we have seen in Sydney).

Patrick Cullen gives a very focused performance and an arresting vital dilemma to the young, barely, out of his teens Eddie, creating a clarity of intention physically, with a verbal skill, including a very comfortable use of dialect, with confident bravura. His playing energy and theatrical intelligence does much to keep the production afloat. Whilst Mr Knight does not demonstrate a mastery of the vocal skill needed to handle his textual responsibilities with ease and is very lapse with his dialect precision, losing the tensions necessary for his half of the play - he has an intellectual knowing of the man, a 'close' study of the physical handicaps of Hadley, but not enough kinetic skill to sustain the requirements of the drama of the play.

This new company, A Night of Play, tells us in their program note:


It is important, I think, that theatre makes us question our moral framework. Equally important, it should engage us.

This production of BULLY BOY, particularly through the work of Mr Cullen, helps us to examine our 'moral framework' even if we are not, consistently, engaged.
Posted by Kevin Jackson at 10:22 PM