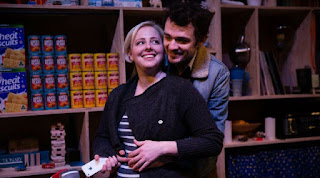 This is the idea at the centre of this new Australian play, by first-time writer, Sam O'Sullivan, and that idea seems to have excited, sparked him to write. Mr O'Sullivan is in a zealous need to proselytize this concept in his search to find stories (books) that, today, make sense to him, and hopefully us. His character Andrew, working temporarily in a library, tells us they


Gave me perspective. Hope Courage. That's what books can do. What any story, in any form, can do. If you can distill a complex, beautiful idea into a story and help people understand it, help them connect with it, use it, I think that's worth doing. Slaughter House Five is a satirical novel. I know that. But when I read it, it made me see something as fundamental as Time from a completely new perspective.

This is what Mr O'Sullivan is hoping to provoke us to do: to see Time, differently.

Two characters, a young Australian, Andrew (Jacob Warner) - a dreamer, a searcher - meets an Estonian, Kristina, (Briallen Clarke) - a pragmatic adventurer - and they engage in a romantic interlude. We participate, as observers, in this story. The chronology of the relationship, revealed to us during the course of the play in many short scenes, has been shuffled and so is presented as an out-of-order time puzzle, illustrating, perhaps, the idea of the Block Universe theory of Time: the past, present and the future are happening and will always be about to happen. The romantic story between these two mis-fits is charming, and beautifully played by Mr Warner and, especially, Ms Clarke - revealing Kristina's tenderness and vulnerability within her pragmatic and emotionally logical carapace. The puzzle is, relatively, easy to sort out.

The problem with the play, as it is experienced at the moment, is that the scientific theory is sometimes too, obviously, the propelling urgency of Mr O'Sullivan's wants, with the integration of the 'two' dramaturgical streams of the play not really intertwined subtly enough. CONSTELLATIONS, a play by Nick Payne (incidentally, Mr O'Sullivan performed in it in Sydney), is a wonderful example of the genre - too, Mr Payne's INCOGNITO. The acting of the love-story in THE BLOCK UNIVERSE is the solid core of this production and so, the most successful part of the writing. Mr O'Sullivan, relatively, fails to distill his inspiration of Time theory into the love story. We are too aware of the 'engine' of the creative spark from Mr O'Sullivan.

Dominic Mercer, has Directed the actors with a gentle sensibility. However, the collaboration with his Set Designer, Isabel Hudson, is less felicitous, the long wooden shelf too solid, too 'heavy' in the evocation of the principal idea of Time (and the immense universe that earth - our existence - participates in). The Lighting Design by Alex Berlage, too, and perhaps, because of the ' block-lump' of the Set has no quality of the ethereal perspective of intangible time to lift us into a more spiritual embrace of the possible miracles of the world around us.

THE BLOCK UNIVERSE (or so it goes), is another new Australian play (see BRIGHT THOSE CLAWS THAT MAR THE FLESH) that adventures into subjects of some sophistication and is very, very welcome, to my regular calendar of theatre going. Go look, see. The two performances of Mr Warner and Clarke are, also, worth catching.
Posted by Editor at 11:40 PM