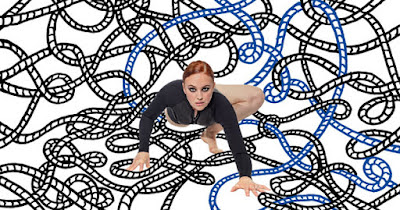 KNOTS is a new Australian play, created by Gareth Boylan, Kerri Glasscock and Michael Pigott. It is, apparently, the third instalment of a trilogy which began in 2014 with TWELFTH DAWN, followed by SEEN UNSEEN, in 2015.

At a late stage in this nearly 90 minute play we are, amusingly, told that art does not necessarily have to have meaning. KNOTS self-devised by this company has an arresting text that keeps one curious and in a state of deliberation in trying to undo its knots. What it is discussing, illuminating, unfortunately, has no real clarity despite much literary invention and some staging images with the usage of simple and very spare properties of furniture and costume delineation, and the practise, occasionally, of a tentative stylistic physical language.

My gist of the experience is:
1. Of the juxtaposition of banal everyday conversations alongside scientific jargon and space-time travel/journey intimations into the future.
2. Of some observations of the results of earthly climatic-change degradations and a kind of Planet of the Apes - the original - re-discovery of an emerging culture, from that cataclysm (this time not apes but of the species homo sapiens surviving.)
3. Of digressions into other popular culture images of a Tom Cruise chuckle that intimate our casual habit to cartoon our cultural dilemmas instead of truly regarding and attempting to deal with them.

I am as mystified today as I write this as I was while watching KNOTS. So I have taken away from the theatre little meaning, mostly opaque befuddlement. And unfortunately, there was not much Art, as the craft of the performers appeared, relatively, underemployed, under projected.

For, I was further distracted in being present with this company, as I contemplated a recent production, by Clockfire Theatre, in this same space, that tackled a similarly dense set of ideas (but about patriarchy): THE NATURAL CONSERVATORIUM FOR WISE WOMEN, that, too, had a very literary text, but had an extraordinary invented physical language to help engage us. What was wonderful was the sorting needed during that performance to solve what was going on elucidated by a confident and a remarkable skills set of well primed vocal and physical instrument utility. In KNOTS, the vocal work of this company has no such clarity of effort (support), and the physical skills were of a very loose commitment - lacking definition and discipline of intent. There was a naturalistic carelessness in both craft areas that tended to help throw-away the text. Word was not clarified by the action, or the action clarified by the word. Content rich, communicative form poor.