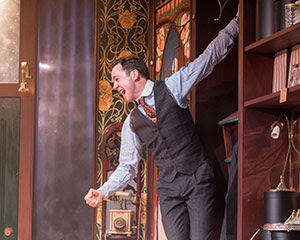 Hayes Theatre Co presents, SHE LOVES ME. Book by Joe Masteroff. Music by Jerry Bock. Lyrics by Sheldon Harnick. Based on a play by Miklos Laszlo. At The Hayes Theatre. 24th August - 15th September.

SHE LOVES ME, is a musical appearing first on Broadway in 1963. Famously revived on Broadway in 1994. Roundabout Theatre again revived it in 2016 - all productions attracting Tony Award nominations - as did the Menuier Chocolate Factory in London. I first met the show as part of Neglected Musicals presented at The Hayes in May, 2012. Based on a play called Parfumiere, by Miklos Laszlo (1937), the plot and characters we know well from film adaptations: the Ernst Lubitsch THE SHOP AROUND THE CORNER (1940), with James Stewart and Margaret Sullavan; the 1949 musical IN THE GOOD OLD SUMMERTIME, with Judy Garland and Van Johnson; and the Nora Ephron 1994 Tom Hanks and Meg Ryan,YOU'VE GOT MAIL.

Originally written in 1937, by Miklos Laszlo (Hungarian of a German Jewish family), the play was made during the simmering European tensions fuming from the economic pressures of the Great Depression, the frightening rise of the force of Nazi Germany led by Adolf Hitler and the threatening power of the USSR, reigned over by (Tsar) Joseph Stalin. The plot and characters are entirely escapist and became and still are resonant touchstones of the humanist need to be loved and love.

SHE LOVES ME, Book created by Joe Masteroff with Music by Jerry Bock and Lyrics by Sheldon Harnick (of FIDDLER ON THE ROOF [1964] fame) is set in period and carries that romantic patina of 'it will all end well', in the end. With our own Democratic demonstrations of power in Canberra and Sydney, our economic wage-deprived times, the collapse of our confidence in the Pillars of our Community: Church, Bankers etc, and the tweet, tweet, tweeting of International and National policy push-and shove (does that equate as 'bullying'?) of President Trump, SHE LOVES ME, sometimes known as the 'Ice-cream Musical' (because of the Act two song: Vanilla Ice-Cream, sung by heroine, Amalia, played and sung by the inimitable Barbra Cook, in the original production), is a welcome respite - much like the pure joyous hysteria over at Belvoir, CALAMITY JANE.

This production at The Hayes Theatre, Directed by Erin James, has a draped red curtain awaiting to be 'swished' away to reveal a 'gorgeous' period setting by Isabel Hudson, built on a raised platform, with a flat floor fore-space for other 'ingenious' action, especially the lavish Choreography, by Leslie Bell. Ms Hudson is also in charge of the Costumes, which are beautifully detailed and many. The whole thing lit sympathetically, warmly, by Matt Cox.

The outstanding Musical Direction, by Steven Kreamer, with his 'band' of five instrumentalists: Sam Blackburn, Andy Davies, Bernard Lagana, Nicholas Griffin and Tracey Lynch, is wonderfully orchestrated to create a whimsical milieu to support the action of the play, that is almost a sung-through work - not quite, but nearly.

Only nine performers make up the cast and they all work to produce a marvellous 'machine' of almost flawless rhythm. All the voices are superb and the choreographic details are magical. Kurt Phelan (Stephen Kodaly), creates a marvellous turn demonstrating, with a lightness of touch, the necessary three needs of the Musical Theatre actor - the ability to sing, dance and act. So does, Zoe Gertz (Ilona Ritter), with surrounding supports Suzanne Steele, Georgina Walker and Tony LLewllyn-Jones (Zoltan Maracek). Whilst Jay James-Moody, supports as Ladislau Sipos, and then scene steals, deliciously, as the Waiter. Joel Granger (Arpad Lazlo), who has come from the recent CRY BABY, at The Hayes, makes another impressive contribution (an actor to keep an eye on). Rowan Witt (Georg Nowack) and Caitlin Berry (Amalia Balash) carry the responsibility of the star-crossed lovers, the principals of the show, with alacrity and clarity. It is a very talented group of performers.

This production of SHE LOVES ME has the high standard of quality care and presentation that The Hayes Theatre is becoming famous for. I wished that it was just a little 'softer', with the thwarted puzzled sentiment of the vital survival romantic need we all have, especially when we feel under duress, to be embraced. Not a sentimental but, rather, a vulnerable yearning for physical and emotional sustenance that the 'animal' in us seeks.

Is this Production, including the Musical Direction, just a little too Slick"? There is a gleam of precision and pace, sometimes too brittle an edge to the performance that dissuades us, prevents us, from completely endowing our own romaticisms onto the events and characters we, as an audience want to participate, create an experience, with. For instance, I felt the oft repeated refrain (4 times) of the shop workers to their customers as they exit: 'Thank You Madame' - an endearing simplistic moment of courtesy - had no telling dramatic development in the arc of this production, which I think it ought, to catch our hearts, not just our intellectual appreciation of it as a 'cynical' mock of commercial capitalism at its most manipulative, with its persistent intrusions. (N.B. The repeat of musical themes and text is a technique employed by these writers which they perfected , subtly, in their Musical which followed, FIDDLER ON THE ROOF). My companion and I had an enthusiastic discussion as we headed for our train, after the, relatively, pleasant night in the theatre.

This production of SHE LOVES ME, is another reason to explain why (justify, if you have to), The Hayes Theatre is a regular part of your near monthly theatre going calendar.