Are You Listening Now? 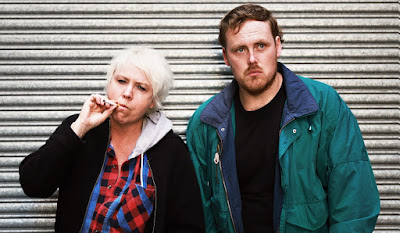 ARE YOU LISTENING NOW? is a new one act play from Xavier Coy (approximately 60 minutes). Last year at Old 505, we were introduced to other of his works BURIED: TWO PLAYS - SANDPIPER AND SMOKIN' JOE. Mr Coy seems to be motivated as a writer to bring to discussion from life observation, 'philosophical' appreciation of the value of every kind of life no matter the difficulties encountered by that life force or the resultant actions of his characters that we are exposed to. He seems intent for us not to swiftly judge but rather he intervenes to coax us to 'understand' his characters and their worlds.

Mr Coy, in his Playwright's note tells us:


When I first sat down to write this play I knew I wanted to address the growing class divide.

His omnes are, firstly, two petty criminals: Mez (Fiona Mahl), who has 'cased' a six-million dollar house to rob as the last hurrah to her career. Her accomplice is Gaz (Xavier Coy), the young 'muscle-man' of the duo, who has not, obviously, had much schooling but is surprisingly interesting because of his obsession about architecture - he has acute and keen appreciative observations of the design of this house - his look belies his smarts and it is the source of much comedy in the writing. In the midst of this luxury-house break, unfortunately, the owners return too soon: Charles (Martin Bell), a rich bloke who has a string of pubs in the Western suburbs, that he has worked hard to acquire and sustain, and his Liverpool-origined wife, ex-barmaid, Claudia (Emily J Stewart), who finds being wealthy a difficulty - such that she uses cocaine as a desperate crutch of distraction, even though she is shadowed by the death of her son, Alex, as a drug addict.

Being 'poor' is hard. Being 'rich', does not, necessarily, make life less hard, so it seems. Says Mr Coy, playwright:


People are complicated, full of contradictions and complications. It's a cliche, but it is a good one, you can never judge a book by its cover.

ARE YOU LISTENING?, is an underbelly melodrama of confrontation of the class divide, with complex character layers, that has a taut tension of action that unwinds to tragedy, that has a kind of throwback to a good episode of say HOMICIDE, but is more sophisticated as it is leavened wittily with comic humour and astute character observation.

Mr Coy continues to impress as a writer and should have attention paid to his output - (although the children story of MEZ's invention seems a bit of a character stretch!)

Ed Wightman, directs the show with competence, on a Set Design of some simple elegance (for this venue, of string-budget resources), by Elle Vanderdeyl. It is brightly lit by, Kianah Marlena. The acting is sufficient and, relatively, secure. There is, however, an anticipation to reveal emotional state from all, rather than keeping it cooler with simple reveal of the information of the line of the text, to give the audience the creative participatory opportunity to find the character reveal themselves and enjoy the escalating stakes of the narrative, to give them a shared catharsis. We 'look' and admire rather than 'read' and invent, participate with the actors. We are 'distanced' rather than 'immersed'.

ARE YOU LISTENING NOW?, has a short season, as do all the works on show in this Freshworks Season at Old 505.

Watching this young writer, Xavier Coy, grow – is worth the time spent in the theatre.
Posted by Editor at 3:37 PM