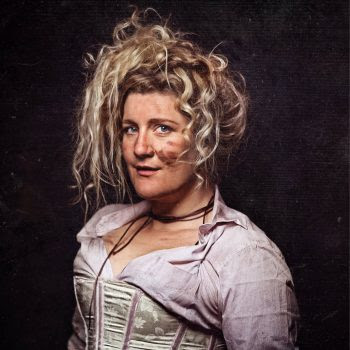 Doris Day and Howard Keel made the Hollywood musical, CALAMITY JANE, in 1953, which began the super trajectory to Number 1 Box Office star for Doris day, for several years, beginning in 1960. Calamity was a real character and has become part of folklore - due to the many tales (exaggerated?) of her life and adventures, which she mostly told! Richard Carroll, the Director of this production, saw local Australian star, Virginia Gay as a natural fit for the title role of this musical, and as a result of a short showing of the show as part of the Neglected Musicals program in 2016, has hustled it into the main curation for 2017, onto the Hayes Theatre stage.

With Ms Gay and a rambunctious group of six other performers: Laura Bunting, Anthony Gooley, Sheridan Harbridge, Rob Johnson, Matthew Pearce and Tony Taylor, CALAMITY JANE, bursts onto this stage as a positively joyful and funny evening in the theatre - no exaggeration, honest - I, unlike Calamity, am not 'Careless with the Truth'. I laughed out loud often, and not just because of the writing and the broadness of the playing of the characters, but because of the energetic and confident audacity of the conception and execution of this hoary fifties musical offer.

The staging, with Set and smart Costume Design by Lauren Peters, has the audience seated in the middle of the action and sometimes active in the action! There is in 'style' under Mr Carroll's guidance, from these outrageous performers, a post-modern attack and employment of not only the musical theatre but a mash-up of vaudevillian and burlesque traditions that score a quick surrender from the audience to a participatory conspiracy to just have a looney escapist few hours of sheer and utter ridiculousness wrapped in a cliche musical theatre plot: of a girl and boy 'fun and games' tease that leads, in this production, to a happy ever-after triple wedding.

Virginia Gay has all the disarming gifts of a charming, modest, self-disparaging 'clown' that disperses the sentimentality of the original material with a wicked intelligence and a great skill that reminds one of some of the traits of Lucille Ball. Besides which, she has a singing voice that captures the sentiment and romantic lyrics of the piece with a twinkle-in the eye and winning smile, when needed, that in 2017, gives clue that there maybe something else going-on here, for when she sings the Academy Award winning song, MY SECRET LOVE, it can, for some of us, have a very special meaning, a kind of gaydar resonance - it is all part of the fun of this production.

The production could appear to be a rough-and-ready sprawl of energy but it is, truly, a highly disciplined mechanism of invented hilarity, with an admirable farcical discipline from all involved - the interaction is definitively alert and 'kickingly' alive.

For, surrounding Ms Gay, Sheridan Harbridge, in a number of personas: Susan, the 'niece' and bartender of the Golden Garter watering hole; Adelaide Adams, the star of the 'Chicagy' theatre world; and a pile of exceedingly hilarious characters in the bar - when needed to fill out the play's company of characters - offers a set of routines of comic genius that are, in what appears as nonchalant throwaway, a demonstration of a technically razor-sharp execution for result. As usual, Ms Harbridge, is a scene-stealer every time she is ushered into view and focused for attention (Nosferatutu). There is no selfishness here just the combustible joy of an artist who loves doing what she can do. And like Ms Gay, she has a voice that, in a different way, bring her songs to delightful delectation.

Further, Rob Johnson, among many responsibilities, has the wit and wickedness to play 'old Doc Pierce' with a juvenile 'coarseness' and follows it with Francis (with an 'i' not an 'e') Fryer, a hilarious and endearing invention, that in my estimation, launches Mr Johnson into a kind of centre-stage 'stardom' in the making. We have seen him before: CARRIE, TRIASSIC PARQ, MAN OF LA MANCHA, but, now, you will certainly remember that you have. A twinkling, endearing personality accompanied with intelligence and daring courage, skill. (I wondered what he would do with HALF A SIXPENCE?) Tony Taylor, too, is in top comic vaudeville form as Henry Miller, the Golden Garter owner in Deadwood City, keen to present the highest entrainment possible to the denizens of the city. In stalwart and indefatigable support, Anthony Gooley, makes a musical theatre debut as Wild Bill Hickock; Matthew Pierce, as the delicious male sex object, Lt. Danny Gilmartin; and Laura Bunting as the other woman and aspiring star, Katie Brown, and they all add sparkilng contributions to the evening's thrill.

Who could have thought that only 7 actors could whirl up such fun? Well, Mr Carroll did. He is assisted by the one man band at the stand-up piano, Nigel Ubrihiem, the Musical Director, heroic genius, really - really (and not a bad actor when needed). "WINDY CITY. THE BLACK HILLS OF DAKOTA and the aforementioned, MY SECRET LOVE, some of the songs to take home, humming. Cameron Mitchell, adds his magic in disguised physical mayhem that is really 'subtle' choreographic detail. Lighting is by Trent Suidgeest.

CALAMITY JANE, is a top night of fun and escapism. Well recommended. You'd be crazy to miss it. You will never watch the movie the same way ever again.
Posted by Editor at 1:18 PM