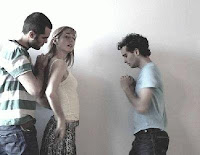 GRIFFIN STABLEMATES AND BOB PRESENTS A PLAY BY ROLAND SCHIMMELPFENNIG at the SBH STABLES THEATRE.

The Arabian Nights that I know from my childhood memories and also from my occasional foray into the ONE THOUSAND AND ONE NIGHTS (Five volumes long) that I have at home, begins with a betrayed husband, a cuckold, the King Shahrayar who in vengeful grief has his first wife beheaded, and then declares that from now on he would marry for one night only and the next morning would order the Vizier to have the Headsman cut off his new wife’s head. For a thousand nights he married and the next day each of the thousand wives would perish. Until only the Vizier’s daughter Sharahrazad and her sister Dinarzad were left in the city. She begged her father to be taken to the King and, along with her sister, listening, began to tell stories. The King became so entranced with her invention that at the rising of the sun he could not bear to have her executed. He needed to know how the story ended. So he stayed her fate until the next day. The King became so captured by her stories that for one thousand and one nights he held off her death, at the end of which time, the King broke down and begged forgiveness of the city for his cruelty and rage and married Sharahrazad.

Roland Schimmelpfennig’s play ARABIAN NIGHT set in a ten storey apartment building, is directly concerned with five characters "from the East and the West telling stories of their interweaving fantasies, their crossed paths and conflicting desires on one hot and enchanted summer’s evening." The stories could be real events or growing fantasies, they are sometimes intertwined but are all told separately, they move relentlessly to perplexing crescendos of magic and violence, shattering in their climax. The final instruction of the playwright is "A bottle drops from the flies and smashes on the floor." At the Stables Theatre that happened and it shattered in thousands of pieces before us.

This is the second production of this play that I have seen in Sydney. Along with another of Schimmelpfennig’s plays PUSH UP. This writer is dazzling in his imaginative constructions and like the original Arabian Night Tales, each of these character’s stories move on by themselves, sometimes join another, disconnect, move into other reality planes, and keep us, the audience bewitched, anxious, curious, frustrated, intrigued. None of it is easy. Part of the fascination of the journey in the theatre is the bafflement that the text can throw up at you. Like in a dream, we flit from one place, story, to another place, story and reality without logic, rhyme or reason.

The task for a company in doing this work is to keep the audience engaged, connected. I can imagine when it works it could be a thrilling experience. This did not happen in this production. Like the bottle suspended in the air, this production began with some lucid simplicity of detectable shape but at about the moment the first microphone was introduced, the performance was given some directorial obstacles that compounded the complexities of the play and it was here that the play like the bottle, dropped, and smashed into too many shards and I for one was not able to commit to making a shape of it again. I became disengaged and disconnected.

Eamon Flack in his Directorial debut began simply and well. He has his actors (distressingly dressed in street clothes) sit on five pink folding chairs, with an electric neon light spelling out ARABIAN NIGHT behind their heads. It flashes on and off, sometimes ARABIAN ,sometimes NIGHT, sometimes ARABIAN NIGHT (I began to think there was an intellectual raison d’etre for the flashing. It unfortunately became a centre of my concentration, so distracted did I become in the performance, so desperate for something to keep me occupied.) The actors began their stories, listening to each other, picking up cues from each other like excited children in a story telling class. It was initially very disarming in its simplicity. Alice Ansara was the most beguiling of them. (She was still so, almost to the end.) Elan Zavelsky was interesting for a time. (Until the director had him move off and sit on the steps beside the audience and talk into a microphone (I couldn’t see him) he became a disembodied sound and I couldn’t care anymore.)

At a certain stage the actors started using a microphone (Or two). Some played with a cumbersome microphone stand clumsily. One folded and threw the chairs into the wings. One took off their clothes and indulgently made vowel sounds into the microphone, imagining, I am sure that she was communicating language, a story. Another dressed in the discarded dress of the disrober and then donned an old blonde wig and put on makeup in a terrible botch, then later stood frozen in a grimaced facial expression, forever, almost drooling into the microphone. One sat at an electric piano and played muffled noises. Another was content to give an impression of himself, which I had seen him do in three other productions in this past eighteen months. (And what about the glass of water??? What did it mean???!!!!!!) All this while attempting to communicate a most tantalizingly convoluted text. It became ultimately debilitating. Nothing was of interest. Were the actors misdirected, miscast or just plain indulgent at the behest of the director? In my experience Roland Schimmelpfennig did not survive the night. If he were the King Shahrayar, I am afraid this company of story tellers would have been beheaded at the first rising of the sun. Swiftly. Maybe even earlier.

It may be indicative of the director’s penchant but his program notes talk about Patrick White and John Howard!!! There is never a mention of Roland Schimmelpfennig. The playwright does not even get a direct mention. (This is the third production where the writer has no biographical information in the program. Does not the originator of this evening’s work warrant respect? I’ve always felt that the writer is the primary element of the dramatic theatre. I also assumes there was a translator (maybe David Tushingham???).) Eamon Flack is also the Artistic Associate of Company B and literary manager!!! I hope his writers are paying attention and insist that they are appreciated in the program notes.

This was a disappointing night at the theatre. It was my second attempt to see this production as I was very keen to see the play again as it is very extraordinary in its unfolding and I was hoping to have a “fantastical” journey. The first time the performance was cancelled as a result of failed sound equipment.

This is a Co-Op production.

Posted by Pearly Productions at 12:08 AM

I was at the same performance. I felt both sad and glad when the bottle finally smashed. Sad because I'd been so looking forward to seeing this beautiful play and the production was made so ugly by thoughtless and directorially indulgent decisions that made no effort to interpret or clairfy the text. Glad that I no longer had to sit captive in that theatre watching those poor actors playing like three years olds with microphones in a way that makes drunken karaoke sound sweet.
And the program notes. And the program notes. Who desreves flack for that?