I Love You Now 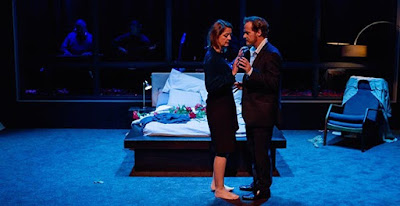 I LOVE YOU NOW is a new Australian play by Jeanette Cronin, for two actors, Jeanette Cronin and Paul Gleeson, Directed by Kim Hardwick, Designed by Isabel Hudson with a Lighting Design by Martin Kinnane supported by Co-Composers and Sound Designers, Max Lambert and Roger Lock.

Leo (Paul Gleeson) and June (Jeanette Cronin) have loved each other. Says Ms Hardwick in her Director's notes:


I LOVE YOU NOW is, at heart, the exploration of a deeply flawed marriage. Betrayal, guilt, complacency, denial have become embedded and now, at a precipice, June introduces Leo to the idea of role playing

For near 90 minutes, vignettes of role play unfold on a very handsome set representing a hotel room. From when lovers first fall in love and tell each other everything to when they fall out of love and don't say anything. The stakes in these lovers' games become high for June, as she reveals to Leo that she is dying. (Oh, no.)

My experience with this production of I LOVE YOU NOW became one of uncoupling progressively from the events on the stage and began, rather, reflecting on works of a similar pattern: Pinter's THE LOVER (1962), OLD TIMES (1971) and BETRAYAL (1978). Ingmar Bergman's SCENES FROM A MARRIAGE (1973). I even contemplated the memory of Bernard Slade's tiresome play, SAME TIME, NEXT YEAR (1975) as an alternative to this. Anyone of those plays I wished I was watching, other than this. And, you know, I don't think the writing is the big problem - it seemed, from what I could discern, quite confident.

The problem at the core of this production is that Ms Cronin is both the writer and the leading actor. The writer of the play appears to have the sense (intellectual) of what is going on, but the actor, on the other hand, mostly wants to show us, only, what June is feeling (emotional). In other words the actor has mapped the emotional arc from vignette to vignette and displays it, but has not mapped the narrative arc with sufficient, enough, clarity. The subjective - emotional - choices of the actor overwhelm any objective - intellectual - storytelling choices that the writer has given.

Ms Cronin is best when she sits sadly contemplating June's coming death - she enjoys that sentimental communication to us - but otherwise seems to be simply acting-out, indulgently, for herself, rather than making considered choices to communicate to the audience , the character June's journey. Just what is the audience meant to receive from this play? The character on stage 'seems' to be Jeanette rather than June. One remembers her recent performance in another self-written play, I HATE YOU MY MOTHER at the Old Fitz, and recall character gestures, that, repeated here now, become 'habits' - 'tics' - of the actor. Ms Cronin's vocal and physical work is blurred in its spontaneous personalisation combustions making it enormously difficult for the audience to decipher, to focus a narrative arc to keep ourselves engaged, attentive. Ms Cronin keeps showing us lots of emotional 'stuff' but fails in telling us much with clarity.

Mr Gleeson, thank goodness, manages to hold a cleaner narrative line for his Leo and balances it more credibly with the emotional rise and falls of the many vignettes, the actor's simultaneous objective and subjective concentrations each supporting, clarifying the other, so that we, the audience, can 'read' fairly accurately what is going on with him. He is a stabilising influence to the experience.

The production looks very good in this space. Ms Hardwick has created a number of aesthetic choices in her work and has valiantly attempted to hold some focus for the audience's clarity of the 'events' of the play. The Design, the focusing and handsome lighting by Martin Kinnane, the use of the 'live' musicians, the 'game-play' with the losing and finding of the spectacles (metaphor?) are all thoughtfully employed to give the audience an opportunity, a chance to be stimulated. Alas, to no real avail.

On the theatre card blurb we are told:


I LOVE YOU NOW is a sexy, tragi-comedy about love and desire ... plus tango!

The quality of the dancing (much lauded in the pre-production news) is a symptom of the problem of the production. Not good enough to have such a central metaphoric place.
Posted by Editor at 2:12 PM