A History of Everything 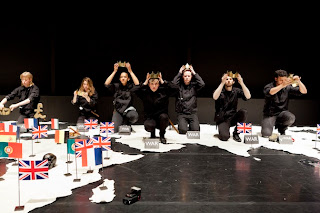 Ontroerend Goed first appeared in a Sydney Festival (2009) with an absolutely impressive work of sheer joy: THE SMILE OFF YOUR FACE. It followed later in that year with a touring company of teenage youth in a very cleverly devised product called ONCE AND FOR ALL WE'RE GONNA TELL YOU WHO WE ARE SO SHUT UP AND LISTEN.

For THE HISTORY OF EVERYTHING, the director and co-writer of this text, Alexander Devriendt (Co-writer is Joeri Smet) has worked in collaboration with four actors from his company and three from The Sydney Theatre Company, to tell the history of everything, beginning in the present and moving backwards to the Big Bang. The actors dressed in practical blacks, with lots of pockets in the jacket for prop holding (Costume Design, Sophie De Somere), reveal a white map of the world on the flat floor. Then using small props and cards, indicating such things as WAR, the company have chosen short sentence, catchcalls to take us through a history."I did not have sex with that woman". "My baby son was born on this day". Towards the end of the charted history, I thought that Tasmanians, New Zealanders and New Guineans, must have felt conflicted because as the rest of the world shrunk and rolled into a ball they were left on the floor (poor Tasmania left out again). There is no acting here, some painful high sounding gravity now and again, but mostly just a chronological vocal non-de-script rendering of very personal choices by the company. That they have learnt the order is a feat of some skill.

The point of view of these collaborators is dominated by Euro-Western World apprehensions with an occasional nod to China, Japan. Hardly any at all to South America or even to Africa - except as a European colonial war zone. There are blinks to a lot of popular culture icons and even to the personal histories of the actors. Rather than it being a history of everything it is driven by personal bias and/or personal education limitations, rather than by researched significant developments: the invention of language, for instance, tools, fire, grain, cooking!!!  (in this era of the Super Chefs how did food and cooking escape these collaborators attention). The technique employed by the company is dull and not much more than organised presenting-skills. It is cute, rather like watching an educational production in your school hall. Though at one hour forty minutes the school kids would have had less patience than what we had to muster. It is all rather boring and for sure as a school-ed show would have had to big bang much quicker to keep their attention or presence.

I tired of this work quickly as I saw it was mostly gratuitously moved by a shallow history preparation and worse still I was being manipulated by an exceedingly cheesy music score of vulgar sentimentality (A history of Sound and Music would have been a useful adjunct?) that seemed to be from a very small range of interest - including a forbiddingly awful folk song towards the end. After the two earlier works by this company this appears to be a work in draft form, or at the moment it belies its title. Or should it be called THE HISTORY OF SOMETHINGS WE KNOW.

Every evening on Channel 9 at 7pm there is a twenty to thirty second compilation montage of the history of everything from the big bang to the present day, finally catapulting us into one of those idiot situation comedies, this one called THE BIG BANG THEORY. The montage however is genius and I would rather watch it  over and over for one hour forty than recommend this stage production. And whether they screened it backwards or forwards it would still be more interesting. At $45 A ticket, may I recommend that, instead you purchase Neil MacGregor's A HISTORY OF THE WORLD IN 100 OBJECTS for only $35 (or free as a podcast) and have coffee money to spare and a permanent history of the world, where each chapter is more moving and inspiring than any of this work.

I think it is important to remember that it was called "A HISTORY" not "THE HISTORY" OF EVERYTHING. I enjoyed it and had a lot to think about during the show, particularly about the phenomenal amount of (historical) information that we all keep in our heads in this modern life. I enjoyed the ride back in time through "A" history. It kept my attention from start to finish, excepted for one particular part and i was wondering where it was heading. I have recommended it to friends because my attention was engaged the whole time, which is my measure of a good show.