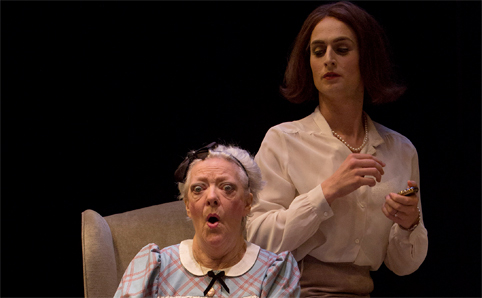 You know, I had packed away my Mardi Gras costumes and make-up kit after the CLUB KOOKY PARTY down there at the Wharf restaurant and bar on the Recovery Sunday, after the Parade Night. A good time had by all, by all accounts. Too soon, brothers and sisters! Haul them out again, for, it seems it is still going on down there. The 'gay' persona mashes, smashes into the mainstream spaces ... well, ... I know, I know it has before, but this time, a little, ... well... well, more obviously, much, MUCH less clandestine at the STC.

Last December I saw and recommended a show called PSYCHO BEACH PARTY down at the Bondi Pavilion. It had an actor/performer called Ash Flanders playing the role of Chicklet -a character channeling multiple personalities - in a perfectly outstanding way. LITTLE MERCY is a new work written by Sisters Grimm, who are none other than Ash Flanders, and his partner in crime, Declan Greene. Mr Flanders is once more on stage in a perfectly outstanding way as the heroine, Virginia Summers, directed by Mr Greene in a spectacularly theatrical manner. The Brothers Grimm would highly approve of these Sisters Grimm, and their tale. No doubt. I say - Angela Carter, one of my Bloody Chamber story tellers would approve as well. Undoubtedly!

This is a company from Melbourne. In the program notes :

ABOUT SISTERS GRIMM: Sisters Grimm (Ash Flanders and Declan Greene) have been working together for the last six years, cultivating a unique brand of 'gay DIY drag theatre", mostly staged in self-built pop-up spaces. They have also performed at Falls Festival, Edinburgh Fringe, the Last Tuesday Society, This Is Not Art, and countless drag parties. Most of their shows involve the re-appropriation of genres, narratives, and conventions from cinema history - mashed up with a variety of forms, from endurance-art to live music to Internet memes. ...

In an Article written by Mr Flanders as a guest editor to the Performing Arts section of Sydney's TIME OUT (March, 2013), he says:


LITTLE MERCY is our take on the fantastic genre of evil child films. We spent literally an hour or so skimming through the greats: THE BAD SEED; THE EXORCIST; ROSEMARY'S BABY; THE OMEN ... and, as we did, we fell deeper and deeper in love with a world where murderers had the audacity to be psychotic AND adorable.
Our story revolves around Roger and Virginia Summers, a wealthy New England couple who have everything ... except a child. Then one dark and stormy night their prayers are answered and sweet little Mercy arrives on their doorstep. But all is not as it seems ... or is it? ...

I reckon Mr Flanders and Mr Greene must have spent their childhood in front of their TV and/or computer screens watching the great and terrible films of their grandparents and parents era and loving it. Others may have played AFL in Melbourne but they clearly watched old movies for their sport. And a Brownlow Medal ,or at least a Gold Medal for them in the Olympic Arts Pantheon, please.....

In Mr Flanders immaculate creation of Virginia Summers one can sense the homage to Bette (Davis), Joan (Crawford), Lana (Turner) Eleanor (Parker), Barbara (Stanwyck) Susan (Hayward) and even Olivia (de Havilland). Every vocal intonation, inflexion, hesitation, every facial tic, every hand and arm gesture, every step, the angle of the head, every breath, is a gloriously captured mash up of all of these stars and maybe others (You can freely add to the list), of a style of acting and storytelling that Bill Collins led us to week after week in his Golden Years of Hollywood film presentations - oh, how we miss him.

Luke Mullins joins Mr Flanders' Virginia, as her husband, Roger (maybe, William Hopper, Gary Merrill, Ronald Regan, John Gavin and Rock Hudson, other B-Stars), a musical theatre director on the cusp of fame with the possible production of a new show. Mr Mullins also creates the nanny (Judith Anderson as Mrs Danvers, shaken and stirred with anything given by Cloris Leachman) to care for little Mercy. A gutsy performance measured to the material and Mr Flanders, step by studied gesture, pipe and all.

Jill Mackay, making her Sydney Theatre Company debut at the age of 80 (hope for us all who haven't cracked it yet or want a return performance!), creates Mercy, with those 80 years of film-going pumping through her memory banks (Shirley Temple, young Judy Garland, Linda Blair to WHATEVER HAPPENED TO BABY JANE?(1962), CHARLIE'S ANGELS (2000) and KILL BILL (2003) ), grabs her opportunity and is outrageous and primed for the pace.

In the wide space of Wharf 2, David Fleischer has designed a raised platform with a white fireplace, a yellow wing chair, a drinks trolley and a plant in a pot sitting on a grey carpet, lit beautifully, like an island of sanity in the black abyss of the theatre space. This set design has surprises galore for you as it shifts locations in the battle for the mind of Virginia. A great piece of work. It is supported by an amazingly complicated lighting design by Verity Hampson, stunning, and a great collaborator causing much of the fun of the direction, writing and acting to work (the chase scene is glorious!) Add a vivid score and live performance, sound design by Steve Toulmin, who, incidentally, creates a slinky Jessica Rabbit homage, topping his acting work in TOOTH OF CRIME by far! and you have a great night out in the theatre. The costume designs, also by Mr Fleischer, are extravagant and hilariously conceived and well executed. The thoroughness of the 'straight' looks of the adults -Virginia and Roger and Nanny - are brilliantly counterpointed with the whimsy of Mercy's incarnations. The satiric edges of both worlds of the clothing, are witty and spot on.  ROCKY HORROR SHOW dress up tributes move over for a new cult: the LITTLE MERCY dress-up! I say.

(Note the STC continues its theme about women and madness, in this case, it shows Mr Stone, Mr Schlieper and Mr Upton another way to do it. Better this way, than the FACE TO FACE way. Let's hold a vote!)

In the words of one of the creators, Mr Flanders:


The show is a high-camp comedy, which basically means it's great theatre for anyone who wants a good time. I can't stress that enough: if you hate good times, please don't come, as you'll only bring down the room, jerk. It's fast-paced, anarchic and even contains a few genuinely terrifying moments.


Two of my favourite moments concern the vaudeville title introduction - a great music score going on there, and the stage-management coup de theatre - listen and watch for it!

This is entertainment. A great hour or so of highly polished campery. Last year we saw PSYCHO BEACH PARTY by Charles Busch, and earlier this year, MILKMILKLEMONADE by Joshua Conkel, all three of these shows with the same punch drunk energy and delight. Next time a little politic mix from Sister Grimm could lift the work into the same stratosphere, as the other mentioned, with no harm done to their appeal, I reckon. The Sisters seem clever enough to do anything.

Next: VALLEY OF THE DOLLS ? What about it, Sisters ? You can get no more Grimmer than that.