Truth, Beauty and a Picture of You 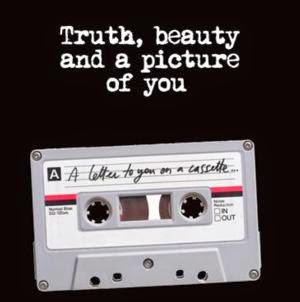 "Truth, beauty and a picture of you", is a new Australian Musical using the songs of Tim Freedman, a member of the Australian band, The Whitlams. In 2008-2009, a compilation album of the same name was released, and the principal plot of this musical has some real life parallels in incident, to the actual history/career of the group. The Book is by Alex Broun and Tim Freedman.

Neil Gooding and the Hayes Theatre Co have not stinted in the presentational values of this production. The highly distinctive standard of the production values of the two previous revivals of two American (Broadway) shows: SWEET CHARITY and THE DROWSY CHAPERONE - the first works presented by this exciting addition to the Sydney performance arts scene, are maintained here. The Set Design by James Brown, and the contemporary Costume Design by Cassandra Pascoli, create a visual density of atmosphere for the many locations of the story line, and locality (Newtown), well. The theatrical and effective lighting by Richard Neville is an enormous asset to creating the right illusion of the world of the play, and the Band Leader, Andrew Warboys, in his very unique and superior manner, leads a vigorous and exciting sound with his collaborators: Jackie Barnes, Konrad Ball, Kuki Tipoki and Daniel Maher. They give great support to the actor/singer/performers: Ian Stenlake as Anton, Scott Irwin as Charlie, Toby Francis as Stewie (and Barman / Busker / Lola), Ross Chisari as Tom, and Erica Lovell as Beatrice.

The book by Alex Broun and Tim Freedman is fairly mundane in its plotting, methods, and dialogue depths. The intermingling of the story of a country boy, Tom, on a 'mission' in Newtown, to connect up with the band personnel, that once his father belonged to, meeting and finding a love interest (Beatrice), whilst finding unravelling, theatrical 'melodramatic' truths of the past and present, holds no surprises or compelling interest for the audience. However much verite there is in the relationship between the 'real life' basis of the story and this theatrical invention, it stumbles in its lack of thoughtful conception of delivery. One casts one's mind back to another 'Juke Box' type musical, JERSEY BOYS, to find a model of its kind - soon to be released as a film, directed by Clint Eastwood!! The virtual, linear telling of the story combined with fairly shallow textual dialogue, create, for the actors, a difficult task to give the characters and the situations any palpable depths of truth. The one dimensional writing is not helped by Mr Gooding, who as Director, seems to dwell on the 'dramas' of the moments of the story telling, and has his actors motivating and 'wallowing' in the dialogue reveals, between the cueing of the dialogue, which really only provides opportunities for the writing to be more exposed in its banalities. The dramatic pacing of the Book needs attention, for the audience, on all occasions, are far ahead of the character's realisations, moment to moment, and so it was difficult to stay in a suspension of belief - one found oneself back in the theatre, waiting for the action to move forward, too often, rather than 'lost' in the dramatic journey of the story being told.

The actors are at their best in the music opportunities of the show. The quality of the writing of the Lyrics and the Music by Tim Freedman permits the actors to connect without strain to the narrative of the story. Mr Stenlake is electrifying, from the first instant at the key board of the 'Band' and in the further performing commitments of the musical chances he has. Mr Irwin, too, is modestly best in character when connected to the music, whilst Mr Chisari makes another good impression, this time in a very different genre style of musical (last seen, hilariously, in THE DROWSY CHAPERONE), sensitively supported by Ms Lovell in their musical interactions.

I missed the pop music of the 'nineties and early this century - I was somewhere else, it seems - and so was learning the language of The Whitlams output, sitting in the theatre in Potts Point. Others in the audience were in states of recognition and happily connected to the musical material. Clearly, this musical crammed with some 19 music credit/song titles, thrills the fan base, but for someone like myself, however, I was only, mostly, superficially engaged - I moved to the music in my seat, but I could not hold a tune from the show or, really, quote a lyric afterwards.

"Truth, beauty and a picture of you", as it stands in development, is for the fans, especially. But supporting this new work, and this production, a flowering of the work, so far, 5 years into development, in one of the most difficult and fraught (and expensive) genres in the performing arts, is an important part of the creative process and I encourage all the audience of the last two shows to get along and help with your response in shaping the work, to its next stages of exploration. It needs the same feed back as the other bigger show STRICTLY BALLROOM requires, to move on. So, give it a go.
Posted by Editor at 9:15 PM