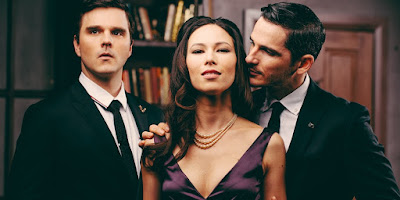 BETRAYAL, by Harold Pinter was written in 1978, and belongs to his great middle period, and along with other works like NO MAN'S LAND (1975) and OLD TIMES , is often characterised as one of his 'memory plays'. Pinter was given the Nobel prize for Literature in 2005.

This play uses reverse chronology, and so the first scene of the play is the chronological end of the story, the last scene of the play is the first chronological event. It begins in a pub in 1977 and then reels back through time to a bedroom in 1968. The characters of Robert (Guy Edmonds) and Emma (Ursula Mills) are married with children. Jerry (Matthew Zeremes), too, is a family man, and a work associate of Robert's in the book publishing trade, has been having an affair with Emma. The revelations of the play and the betrayals that occur, with many people and times, come slowly and painfully. Delicacy of control of the elements, the revelations of the writing, as per usual with a Pinter play, is essential.

So famous is the style and control of the Pinter play that the word 'Pinteresque' has entered our language. The content of the plays centre, often, about the unknown threat, confrontation in a confined space, that is either territorial or more often, the personal tensions of the subconscious. All these threats are subtle and above all else give a puzzle of ambiguity. It is the construct of the psychological endowing that the audience become engaged in - it can be a breathless and nervous experience - and it is that that hallmarks the best productions of Harold Pinter's works and gives one the great satisfaction of having spent your money and time with him. Trying to piece the information together and holding one's breath with a ferocity of the fearful consequence of social horror of the inappropriate - the transgressions of petty dishonesties that accumulate into dangers of emotional conflagration, is one of the major joys of watching a good production of a play by Pinter - a thrill, indeed.

BETRAYAL bubbles up, arises from, in, the middle class world of the British publishing world. The accent is educated, the dialogue edited for effect by the 'combatants', where what is said is not always what is meant, the undertext of the language rich with inference that is open to ambiguous readings. The characters fight duels not with swords, but with well articulated and carefully chosen words and sensitised silences. All great plays are poetic plays shaped within mathematical formulas and, at best, are metaphors for life reflection when meticulously staged. BETRAYAL is regarded as one of the great plays not just of Pinter but in the English language canon. His form is complex and studied, crackling with theatricality, lyrical and funny - his sense of the ridiculous pointedly honed. What lies at the heart of a good Pinteresque production is preserving ambiguity and that can only truly succeed when the creative participants are all sure of what is happening and yet are masking it. - the quintessential British-stiff-uperlip!

So, to this production at the Ensemble Theatre, Directed by Mark Kilmurry. Mr Kilmurry gives his possible success with this demanding play a great obstacle when he elects or allows his company of actors to use an Australian accent - educated (or not). The vocal power of the sounds of the dialogue of Pinter's play, a vital part of its aural poetry and power, gleaming from their milieu for sophisticated effect, have been on the stage at the Ensemble, deflated and flattened into, relatively, limited expressive 'noises': the laconic Aussie vowels and drawled musical rhythms. Pinter with BETRAYAL requires vocal instruments of metallic gleam and precision. It is a palpable loss of quality that it is not delivered here. There is definitely no gain from this indulgence in the Australian sound from these actors. And it is worse when the actors appear to have no real sense of being able to conjure any range of vocal colouring for the usage in the 'combat' of meaning, which should be swathed in tangible vocal ambiguities of pace, volume, tonal range and musicality of rhythm .

The arrangement of words and the construct into this world's language - full of the antithetical understatements of the English upper classes - is precise and the form and rhythm of his lines, should hold the audience in a formal grip as strong as Shakespeare or Beckett. They are the mechanisms of the 'tease' of Pinter's dramatic intentions. All have been meticulously considered. And what makes the work lift out of what is seemingly ordinary exchange and gives emotional power to what might look like mundanity on the page is his use of the Ellipsis, the Beat, the Pause and the Silence. It becomes, when utilised, a very expressive form of dramatic speech. It is where the unarticulated moments are as meaningful as the words themselves. The actors need to be knowing about what they are 'saying' in the 'scoring' of Pinter's music with the unspoken 'language'. On page after page, all four of the non-verbal cues have been given by Pinter. It was difficult, on the Ensemble stage, to read these actor's usage of that writer's directive, and impossible to define what was what - an ellipse, a beat, pause or a silence, and why they were authorially different in intention for the character and the context of the story. "The Beat, the Silences, and the Pauses and the Dots have to be learned and differentiated, and the repetitions of the antithetical phrases have to be pointed and understood" says Peter Hall, the original Director of this play. It is then when the inner life, thought process, is specific and true that we the audience can endow the inner feeling without over statement or revelation from the actor. To play Pinter is to work with a master playwright and it demands more than a cursory investigation and explication.

Mr Edmonds, Ms Mills and Mr Zeremes are all arresting physical types and one is easily able to engage with their look and charm, but unfortunately the look and a shallow read of the play, turn out to be not enough for this production of BETRAYAL to take off into the fabulous realms. The Set Design by Anna Gardiner is required to serve two separate productions (The other being HISTORY OF FALLING THINGS) and so undermines the Pinter aesthetic determination that is as thoroughly thought through as the writing of the text. Not her fault - just a BIG demand. The economy of the Designer's eye - essential props and colour codes - within the limitations of the Ensemble demands is successful.

This production of BETRAYAL serves as an easy way to engage with the text of the play but has not begun to reveal the potential of the play as a superior experience in the theatre. BETRAYAL, betrayed? For some of us, yes. For others, not so.

Go and see for yourself.